Following a good week at Tattersalls, where they sold a sales-topping son of Shamardal for 500,000gns, Tony and Roger O’Callaghan’s Tally-Ho Stud continued in fine form when it was responsible for the most expensive two-year-old at DBS.

The Exceed And Excel colt leaves the ring after fetching £300,000

Setting a new record for the Yorkshire breeze-up sale, the son of Exceed And Excel out of the Group-winning Wunders Dream was knocked down to David Redvers on behalf of Qatar Bloodstock for £300,000.

“Tally-Ho Stud are the only remaining vendor from the first European Breeze-up at Doncaster back in 1977 so it is fitting that they have enjoyed a spectacular result at the 35th renewal of the DBS Breeze-up,” said Henry Beeby, Managing Director of DBS. “Their £300,000 for the Exceed and Excel–Wunders Dream colt sets new record for this sale and caps a remarkable and much deserved week for the O’Callaghan family.”

Darley’s first-crop American stallion Street Boss sired his first winner the weekend before the sale and another of his two-year-old colts, this one out of the unraced Meadowlake mare Merit and offered by Thomond O’Mara’s Knockanglass Stables, sold for £120,000 to Kevin Ryan, bidding through Stephen Hillen, who also went to £100,000 for an Avonbridge half-brother to last season’s Listed two-Year-Old Trophy winner Bogart.

The strength throughout the market, doubtless aiding the sale’s clearance rate of 77%, was owing to the presence of a decent number of individual domestic buyers, including a significant number of trainers. Along with Kevin Ryan, trainers to buy at the sale included Jeremy Noseda, David Marnane, Ollie Pears, Derek Shaw, Bryan Smart, Jeremy Gask and Mark Johnston. 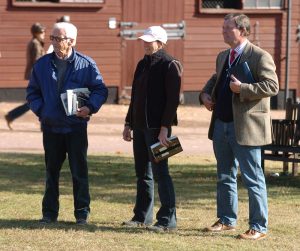