British horseracing will benefit from a prize-money pool of more than £120m in 2014 following announcements from the Horserace Betting Levy Board (HBLB) and Jockey Club Racecourses (JCR) promising enhanced funding.

HBLB has increased its allocation to prize-money for, with the predicted 2014 figure of £56.4 million representing a rise of over £6 million from 2013. Meanwhile, JCR intends to commit £19.5 million of company funds to prize-money at its courses next year – a rise of 57% since 2009.

The increased input from the Levy Board includes the annual input of £4.5 million from the new four-year Incentive Fund, which was agreed by the British Horseracing Authority (BHA) with the UK’s four largest bookmakers – Coral, William Hill, Ladbrokes and Betfred – plus Betfair’s voluntary contribution

“The Board last year adopted as a priority objective an increase in prize-money and it is extremely pleasing to be able to budget for an extra 12% in our prize-money contribution in 2014,” said Levy Board Chairman Paul Lee.

“This is a further reflection of our continuing financial stability after a difficult period in the early part of the decade. The increased expenditure is also a consequence of the recent agreement of the 53rd Levy Scheme and the four-year arrangement between the four largest retail bookmakers and racing.

“We are also able to provide an additional £200,000 to our veterinary science and education research programme, now in its 50th year, and an increase of the same amount in the grant towards the racing and breeding’s recruitment, training and education initiatives.”

Jockey Club Racecourses, which includes Newmarket, Cheltenham, Aintree and Epsom among its 15 tracks, has increased its prize-money contribution from £18.5 million in 2013 meaning that its 364 scheduled fixtures for next year will offer total prize-money of £42.8 million.

Simon Bazalgette, Group Chief Executive of The Jockey Club, commented: “Prize-money is the lifeblood of British racing, providing a return for racehorse owners and supporting trainers, jockeys and stable staff. It is an important measure of the health of our sport. As a result of the continued growth of our business, I’m delighted to announce plans for The Jockey Club to contribute more than ever before into prize money in 2014, with our year-on-year increase once again far outstripping improvements in the wider economy.

“At the same time we have been raising capital to invest in projects designed to enhance the customer experience we offer and increase our returns. In particular at Cheltenham we have our biggest ever facilities development, which will cost £45m to be ready ahead of the 2016 Festival.”

The dual announcements brought some Christmas cheer for BHA Chief Executive Paul Bittar, who said: “We forecast that prize-money in 2014 will reach a new record and exceed £123m, an uplift of over £10m on this year. This increase is evidence of the benefits of stronger collaboration amongst racing’s key stakeholders together with a more constructive approach to working with the betting industry.

“The two main developments contributing to the increase have been the securing of Prize-Money Agreements or commitments from racecourses and the terms of the recent Levy deal and four-year arrangement with the major bookmakers. A critical point that should not be overlooked is the increased stability that these deals provide, particularly in light of the £16 million drop in prize money between 2009 and 2011 that followed a significant reduction in Levy.

“When combined with the landmark commercial Betfair agreement struck last year, the four-year Levy arrangement delivers significant value above what can rightfully be collected under the current legislation. While we will continue to pursue legislative change, the arrangement with major betting operators is significant; a conclusion that could not have been reached without the support of the Levy Board and we are grateful for their role in the process.” 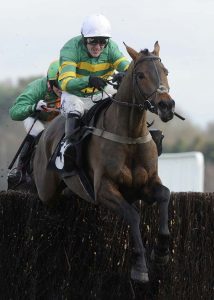 Up Next
Brothers jump to glory at Cheltenham