Dolmen Bloodstock’s Dark Angel colt took a starring turn at the rescheduled Tattersalls Ireland Goresbridge Breeze-Up Sale on Thursday when commanding a fee of £410,000 from Richard Brown of Blandford Bloodstock.

The sum was a record price for the auction which was being held at Park Paddocks in Newmarket for the second year in a row owing to coronavirus restrictions in Ireland.

It represented a wonderful windfall for the colt’s owners Jerry Horan and Katharina Irmer who had pinhooked the two-year-old for just €6,000 as a yearling last autumn through their Paragon Bloodstock banner.

Subsequently sent to Clare Manning of Boherguy Stud to be broken in, the son of the winning and Listed-placed Arch mare Venturous Spirit was prepped for this sale by Justin Timmons and Danny O’Donovan of Dolmen Bloodstock.

Irmer said: “He has never been lame; he has never missed a day’s work. He is just an amazing horse; it is great for the guys they have done such an amazing job. It was a perfect time of the year to sell, we were never tempted to sell earlier as we wanted to give him the time.”

On how the colt was selected, Horan revealed: “Katharina and I know each other through the sales. We were in France trying to buy horses to breeze, Katharina was there working for Grove, and she said to me that if I got anything to let her know. I bought this horse, and we went out for dinner and the rest is history!

“Clare Manning broke him and then he went to the lads, they did all the work, we were just lucky enough to own him. He always had a big stride; he has always been a big horse.”

Timmons, one half of Dolmen Bloodstock, added: “We never expected a figure like that, you do your best to get them to the sale and there is a lot of pressure to get to a sale. Then you have to breeze and then all the other aspects, you need a lot of things to go right.

“It is life changing stuff. Jerry and Katharina, they invested and took a punt, it is a great story.”

On his new purchase, Brown said: “Well, it was significantly more than I had expected or hoped to pay! I thought he did an outstanding breeze and obviously the sire is one of the top sires in Europe. He is a gorgeous big horse, and when I spoke to my client last night, we highlighted him as the one – as obviously my underbidder had!

“He is a smashing horse, and you always have to pay more than you value them. I was on the phone to my client through the sale and I would say that was our last bid. I am delighted to get him, he was never going to be a cheap horse but when you get to those echelons, the pressure is on!

“I can’t say who my client is, but he will be trained by William Haggas. It is one of the greatest sale ring touches and fair dos to the consignors. It shows that the dreams are there and good on them, they prepared him to a very high standard.”

Having missed out on the top lot, agent Alex Elliott had better luck earlier on Thursday’s trade when he secured Grove Stud’s Bated Breath filly out of the Listed-winning Royal Academy mare Polar Circle for £240,000,

“She did a very good breeze, she has got a pedigree, she is by a sire that I admire – when you want to buy these horse that can do everything, you’ve got to get the head down and buy them.

“We come to these sales and we try and buy the best horses, and we thought she was the best horse here – her price suggests that plenty of others thought so too,”smiled Elliott. pic.twitter.com/Gj8MPXuzQw

“She has been bought for a partnership; I don’t know who will train her yet but she will stay in England. She was one I thought we had to have; I am very happy. Her vetting was good, she is a beautiful physical, her action is superb, you could see her in a parade ring before a good race.”

Consignor Brendan Holland, who had purchased the filly for 30,000gns as a yearling, added: “I thought she was a nice yearling, there was no mystery, she was just nice, and I thought at that money with that pedigree she was a good bet. She was from Jenny Norris, I like buying off her, she produces them well. Hopefully the filly is lucky for the next guy, she has been good to us.”

O’Callaghan said: “I didn’t think I’d have to give that; he has a bit of size and scope and a great pedigree. Physically he is one of the nicest horses here, and he did a very good breeze for a horse who is going to take a little bit off time.

“I really, really like him and think he is something a bit special. The pedigree is current and is by a stallion that is not too bad either. I haven’t had any by Belardo yet.”

“Physically he is one of the nicest horses here, and he did a very good breeze for a horse who is going to take a little bit of time. I really really like him and think he is something a little bit special” pic.twitter.com/ZH6OsBGzYn 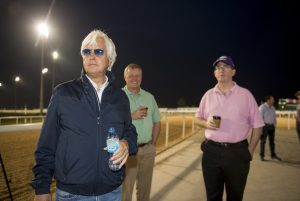