His own Dan
Stories

A total of 33 yearlings over the three days sold for 500,000gns or more with six changing hands for seven-figure sums, led by a 2.6 million gns son of Galileo.

A half-brother to Group 1 winner and young stallion Harbinger, the colt was offered by James Rowsell’s Ashbrittle Stud – birthplace of the Oaks winner Talent – on behalf of his breeders Nick and Anita Ooi and sold to MV Magnier.

John Ferguson had a busy Book 1 when buying 38 yearlings for Sheikh Mohammed to the tune of 17,465,000gns, including four of those to sell for 1 million gns or more. With Ferguson snapping up six of the ten Dubawi yearlings in the catalogue, the Darley stallion ended the sale as leading sire by average price, with the ten sold achieving an average of 654,000gns.

Book 2 of the Tattersalls October Sale starts on Monday, October 13. A full report from Park Paddocks will feature in our November issue. 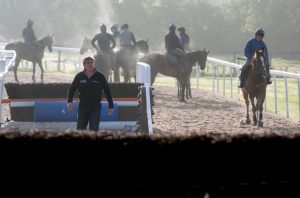 Up Next
His own Dan