Recognition for breeders at Update days

After being fed crumbs from the top table for several months, it was a pleasure to get a taste of the meat on the bones of the BHA’s Strategy for Growth when the Industry Update 2015 roadshow rolled into Newmarket on its four-venue tour.

The presentations by the BHA’s Nick Rust and GBR’s Rod Street did not disappoint breeders, for there were a series of references that demonstrate – on paper at least – that our rightful place is being recognised.

“We need a thriving breeding operation,” Rust said, by way of stressing the ability to satisfy the requirement for more owners, horses in training and runners.

Quite right. Everyone has their place but without breeders there would be no owners, horses in training and runners.

About the recently-announced jump racing review, Rust added: “The breeding of jumps horses in Britain is facing difficult times, and we need to look at that.”

Quite right. The point was well made in the recent TBA-commissioned report into Britain’s staying races and their future, and its findings on the absolute need to encourage the breeding of stayers for both codes of racing. The report drew a complimentary observation from the BHA Chief Executive, and we intend to ensure that its contents are not allowed to gather dust.

On the ambitious targets that have been set, including the provision of substantially more horses in training over the next five years, Rust said: “That forebodes a more sustainable future with a better pipeline and a race programme more in tune with the needs of breeders.”

Quite right, although concern about whether the immediate timeline can be achieved was a point well made during the Industry Update’s question-and-answer session by my predecessor as TBA Chairman, Kirsten Rausing.

Nevertheless, the over-arching principle is sound and the TBA executive is already engaged in detailed work on behalf of the strategy under the heading ‘integrated breeder engagement.’ A clear business path has been identified from the point of becoming a breeder to enjoying a lifetime in the sport, not forgetting the process of setting out to win back those whose involvement may lapse.

The timeline begins with the integration of all existing initiatives to welcome new breeders, whether from start-up investors or owners of high-quality fillies who are looking to diversify into breeding, and continues with innovative schemes to support activity through the early years of the cycle. Some exciting ideas are being developed to encourage breeders at all stages of the journey.

In addition, the TBA executive is looking in more detail at the race programming aspect, highlighting that support for fillies is an essential prerequisite to make them more attractive in the sale ring and bring about a consequent increase in their numbers in the British breeding programme.

Returning to the Industry Update, I was encouraged when Nick Rust delved more deeply into the human side, saying that welfare and training of staff was “one of the most challenging pillars,” and outlining the need to pull together a wider plan for receiving funding and providing support.

Quite right. The TBA’s education and employment arm constantly strives to secure sufficient skilled people for stud work, but we need to ensure that enough new recruits are found and that existing staff are valued and retained.

The TBA’s breeding industry workforce analysis has already provided valuable information and we look forward to working with the BHA on its ‘participant welfare and training’ pillar led by Carole Goldsmith.

Regarding the organisational structure of the Strategy for Growth, the original work led by Eamonn Wilmott is now being taken forward under Richard Wayman, the ROA Chief Executive. Having had our interests successfully introduced to a pillar that now bears the title ‘horse population, ownership and breeding,’ and conducted a successful session with representatives of the BHA board, we will challenge those engaged in this particular aspect of the strategy to deliver on all aspects that affect breeders. 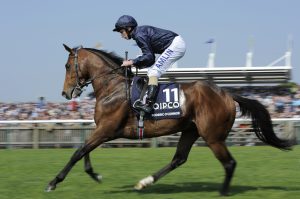 Up Next
First stakes winners for freshman duo