Racing in the Recession

Breeders have shown resilience in the face of the economic downturn but for many, the future remains uncertain

In January 2008, this magazine spoke to leading all-weather owner Nigel Shields, following the success of Lang Field in a Grade 1 in America, earning him the Owner of the Month accolade.

Shields had enjoyed plenty of success in the previous ten years in Britain, notching 273 wins on the Flat and earning over £2.2 million in total prize-money. However, during the course of the interview, he revealed that his days as an owner on these shores were numbered.

“The situation with prize-money here has reached a critical stage,” he said. “I get more enjoyment from my UK horses but I have to look at the financial implications.

“Race values are dropping, yet training, veterinary and transport costs keep going up. The racing industry needs to address the issue of prize-money urgently – otherwise others will come to share my view that ownership in Britain is economically unviable.

He added: “Owning racehorses is a paid pleasure, yet the price, for me, has now become too high.”

Yet new owner (individual) registrations in January this year showed an 18.1% increase on 2010, rising from 116 to 137 (still well down on the 207 who registered in January 2008). The green shoots of recovery, perhaps? The horses in training figures suggest it would be unwise to get carried away with this figure.

Fewer owners and fewer horses – so how have Britain’s trainers managed during the recession?

Rupert Arnold, Chief Executive of the National Trainers Federation, points to the number of trainers in the UK showing a sharp decline.

“I think the situation will get worse before it gets better. Prize-money is very low and there is a strong sense of pessimism generally among trainers. We have detected a dwindling enthusiasm for racing among owners who are leaving the sport. Trainers are finding it increasingly difficult to sell the British racing experience to owners.

“There is a dual aspect here – while numbers of owners are falling, there is an increase in costs for things like fuel, feed, bedding, which is making life hard for many trainers.”

Peter Cundell’s decision to call time on his training career followed on from the likes of Hugh Collingridge, Paul Howling, Chris Thornton and Rodney Farrant relinquishing their licences.

Down to handful of low-grade horses, Cundell, who was the NTF’s Deputy Chairman of the Central South Region, is forthright in his views on where racing’s problems lie and, like Rupert Arnold, is pessimistic about the immediate future of racing.

He says: “We need to take the bookmakers on – they’re taking the sport for a ride by moving their online and phone operations offshore. And then they’ve stitched us up with their shops by not paying full rates.

“The bookmakers play hard ball and we play soft ball. Racing needs to control its fixtures and decided when to race – not for the benefit of bookmakers.

“I think the number of trainers will halve in three years – there’ll be about 300 trainers and the rest will have given up. Anyone training under 40 horses is either losing money or subsidising the business by employing family members as staff. It is becoming too hard to make a living from the sport.

“There will be a shortage of horses because the foal crops in Britain and Ireland have fallen so dramatically – we need to cut back fixtures, despite what the bookmakers say.

“The Flat will be hit harder – prize-money is worse, spread out over more fixtures, and jumping owners are in the game for enjoyment with horses that are around year after year.

“In my region many trainers are around 15-20% down on numbers this year. The number of two-year-olds entering training in April will be very interesting.”

NTF President-elect William Haggas is not in the ‘struggling trainer’ camp yet understands the challenges his fraternity faces better than most.

A supporter of the Horsemen’s Tariff, which recommends to racecourses the level of prize-money they should put on for all races, he is concerned about the drop in horse numbers.

“I believe we are right in the middle of the bad spell, with no joy ahead for the foreseeable future for the training fraternity.

“We’re looking at a dramatic drop in horse numbers. What looks like happening in a few years time is a scenario of pretty decent prize-money but not as many horses in training.

“There would not be as many fixtures either, as owners and trainers will not be able to supply enough horses. Things will not be nice for a while but you could argue we needed a correction.”

The decline in the number of horses in training has had a knock-on effect on stable staff levels, as trainers realise they don’t require as many hands to muck out and ride work.

“We have had to deal with more redundancies in the last couple of years than when I started four years ago,” explains Jim Cornelius, Chief Executive of the National Association of Stable Staff (NASS).

“NASS has certainly been representing more stable staff and helping to get them what they’re entitled to. One of the benefits of joining NASS is free legal representation for stable staff.

“More trainers seem to be prepared to let staff go for misdemeanours, rather than dealing with them another way. The reduction is a response to the economic situation – trainers don’t require so many staff now, it’s as simple as that.

“Wages are higher in Newmarket so jobs have been shed there by trainers who are finding it hard, but I think overall there are more problems in the north.”

“With not as many horses as there were the training business is scaling back, so there are lots of stable staff about. Five years ago they were impossible to find – now it’s the other way round. In Newmarket certainly there are plenty of staff about.”

Keith Reveley, who trains in Lingdale, Cleveland, is Deputy Chairman of the NTF’s North Region. His stable earned £300,000 in prize-money during 2007/08; last season yielded just over half that amount.

He backs Cornelius’s view that his area has been hit hardest by the recession and echoes Cundell’s sentiments regarding trainers employing family members.

Reveley says: “I could see this coming two or three years ago, so even then we were cutting back on the numbers we employ.

“It’s now a family unit, with my wife Fiona and son James. We do employ six or seven full-time staff, and have part-time staff too, but the set-up is different to even five years ago, say.

“That had to be done and we keep everything to a minimum, except of course you cannot cut corners where horses are concerned.

“We have people come in for weekends only, from local colleges or those who have been involved with pony racing for instance, and that means that full-time staff have to work only one weekend in five, instead of every other weekend as before. That allows us to cut down on overtime payments.”

Talk of a north/south divide in racing is not new and Reveley believes it exists for the majority, pointing out the exceptions to the rule.

“Things are pretty bad in the north. The bad weather hasn’t helped as a lot of fixtures and therefore prize-money has gone up in smoke. I basically train for six months of the year – I’m not into summer jumping – so rely on prize-money in the winter for my income.

“I think there is a north/south divide. Trainers and owners in the north have been hit harder. The bigger owners with horses in the south have seemed almost immune to the economic climate.

“Richard Fahey and Mark Johnston have done well but it’s been a struggle for most, and you have to cut your cloth accordingly. I am careful now when going racing in the south. I drive the horsebox myself and I can tell you it costs a fortune to fill the tank.

“I like to support the Scottish tracks too – they try to boost prize-money and do well – but I went to Ayr the other day, only for it to be off due to waterlogging.”

Jockeys have also been frustrated when left out of pocket after a pointless trip to the races. A recent initiative to pay half a riding fee when jockeys were declared for a non-runner was designed to help compensate ‘journeymen’.

However, the scheme never got off the ground after many trainers voiced their disapproval.

Rather than a north/south divide, Haggas believes that it is the size of a trainer’s stable that will dictate how they can ride out the recession.

He says: “The bigger trainers appear well up to their normal levels. Henry Cecil seems to have more horses; the bigger trainers do not seem to be affected at the moment. If you have plenty of horses you can cope better with recession than others. It’s the middle to lower tier finding it hard.

“You’re going to get more people forming syndicates than being able to afford to go it alone. Still having enjoyment but cutting costs will be the aim for many owners. You will have people rather taking a leg in four horses than owning one.”

The number of trainers buying ‘on spec’ at the sales has dropped off dramatically in recent times as owners cut back.

Ed Prosser, who has covered the major horse sales for the Racing Post for 14 years, has witnessed at first hand the decline in this activity.

He says: “It’s been pretty obvious in the last couple of years that fewer trainers have been prepared to take a risk by buying yearlings on spec as they did in the past and, if they do, they will be pretty certain they have an owner to sell the horse onto.

“A lot of trainers had their fingers burned by being landed with horses during the economic downturn and there has been a major tightening of credit facilities.

“Banks won’t lend money for much at the moment, least of all buying horses, and the sales companies are owed fortunes for unpaid purchases so are understandably very reluctant to extend a great deal of credit to clients as they did in the past.

“It’s resulted in a contraction in size of every market reliant on domestic buyers and, even when the economy does recover, it’s hard to think sales companies will ever again offer credit as they once did.”

The claim that Britain has the best racing in the world may start to ring hollow if the current declines in the industry are not stemmed in the near future. 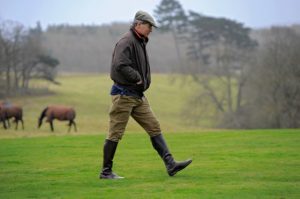 Up Next
Gold Cup hunter