Rachael Blackmore and Honeysuckle’s winning association continued on Tuesday as the pair took the showpiece Grade 1 Champion Hurdle at the Cheltenham Festival. In doing so Blackmore became the first female rider to land the contest.

Blackmore kept things simple on the daughter of Sulamani, settling her mount on the outside of the field in the early stages so she could get a clear view of the hurdles.

As Goshen veered violently right in the back straight, Blackmore manoeuvred Honeysuckle in behind stablemate Aspire Tower before they headed for home with the mare travelling ominously well.

An impressive burst of speed was utilised by Honeysuckle to put clear daylight between herself and her rivals as they headed towards the final flight. A fine jump sealed the deal and the mare won by six and a half lengths to stretch her unbeaten record to 11 races under Rules.

Blackmore said: “I am speechless, to be honest. She is just so incredible. I just can’t believe we’ve won a Champion Hurdle. Kenny Alexander, Peter Molony – they’re both at home with their family watching; it’s a pity they can’t be here today, but I tell you, when I was crossing the line I didn’t care.

“Honeysuckle was just incredible. When Goshen headed off and came back in, I was just slightly worried there, but she’s done everything I wanted her to do. I really just can’t believe it.

“Henry produces her every day in that kind of form for me to steer around, and it’s unbelievable. This is such a special race and I am just so thankful to be a part of her [career] – it’s all about her. She’s unbeaten, and she’s improving. Her last run was her career best until today; she’s getting better all the time. It’s just phenomenal.

“To me, this was never even a dream. It was so far from what I ever thought could happen in my life – to be in Cheltenham, riding a winner of the Champion Hurdle. It’s just so far removed from anything I ever thought could be possible, so maybe there’s a lesson in that for everyone out there.”

It was a first win in the race for trainer Henry de Bromhead, who added: “It is stuff you dream of – I never thought this would happen. It’s amazing, like I say, you dream about it.

“Rachael was amazing. I thought she was so cool throughout the race. I was saying I had to bite my tongue before they went out as I was so worried I would say something stupid to her and mess her up, but that was amazing.”

Honeysuckle’s success in the Grade 1 is yet another feather in the cap of British National Hunt breeding and she becomes the first British-bred to strike since Punjabi won the 2009 edition.

Bred at Doug and Lucy Procter’s The Glanvilles Stud in Dorset by Dr Geoffrey Guy, Honeysuckle is by Yorton Farm Stud’s late stallion Sulamani out of the late Lando mare First Royal.

No catching Appreciate It

The opening race on Tuesday saw Appreciate It cruise home in the Grade 1 Sky Bet Supreme Novices’ Hurdle, a performance which announced the seven-year-old as a real star in the making.

Since finishing second in last year’s Champion Bumper behind Ferny Hollow, Appreciate It has made a seamless transition to hurdles, having won both the Grade 1 Future Champions and Grade 1 Pharma Novice Hurdle prior to Tuesday’s success.

It was a race that played into Appreciate It’s hands, as For Pleasure set off in his customary front-running fashion and jockey Paul Townend made sure to settle his charge at the head of the chasing pack.

Travelling smoothly as Ballyadam and Metier’s challenges wilted, Appreciate It forged clear in the home straight. All the pair had to do was clear the final flight and they did that with ease to coast home by 24 lengths. 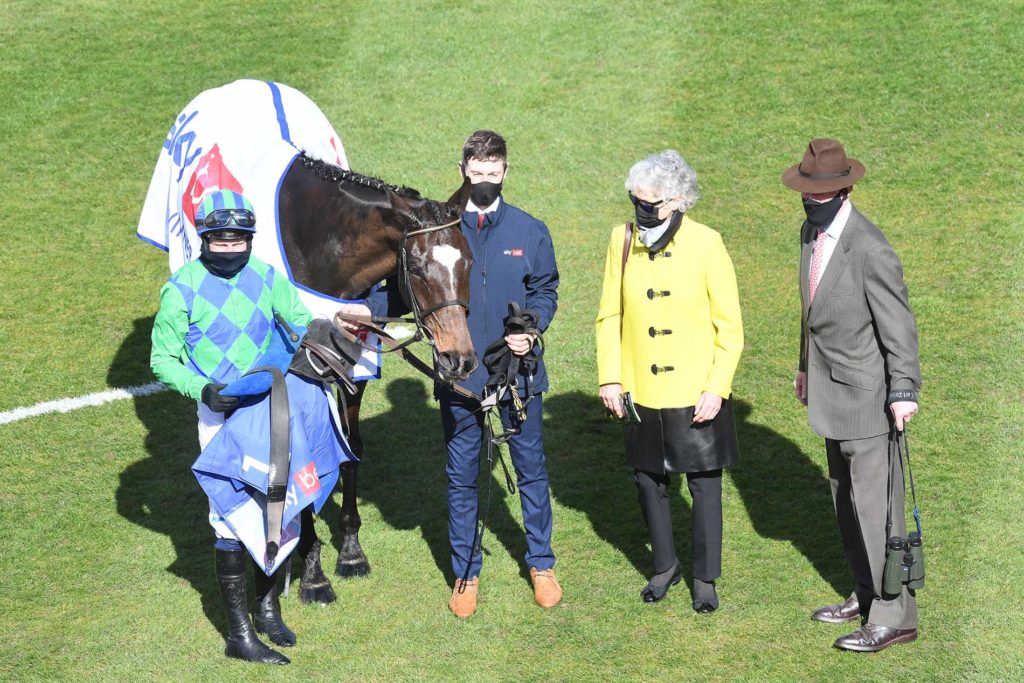 Appreciate It with Willie Mullins and Paul Townend after winning the Supreme Novices’ Hurdle at Cheltenham – Photo: George Selwyn

“After a performance like that, it probably opens the [chasing] door. He’s bred like a chaser, we started jumping him over hurdles and he felt like a chaser.

“It was different [without the crowds], but look, we are so lucky to be here and able to take part in the sport that we all love. It was very different, but I could hear the Irish boys in the corner, so I was ok!”

Winning trainer Willie Mullins added: “We were unfortunate to have a faller at the last [Blue Lord], but Appreciate It was awesome. Just always exuding confidence the whole way down the hill, it was just textbook stuff from Paul and the horse.

“He is a big horse, he looks like a three-mile chaser and the fact that he’s here, winning three championship races this year over two miles, astounds me. I had him pencilled in as maybe an Albert Bartlett, definitely a Ballymore horse, so it just shows.”

Shishkin does it again

Another year, another win for Shishkin at the Cheltenham Festival as the talented chaser remained unbeaten over fences with victory in the Grade 1 Arkle Chase.

As the pair continued to stretch the field, jockey Nico de Boinville opted to decisively move the seven-year-old upsides the leaders as they turned for home.

It was clear that Shishkin was travelling the best and smooth jumps over the final fences left the race at his mercy. He crossed the line 12 lengths clear of Eldorado Allen with a further length back to Captain Guinness in third.

A class touch 👏@sevenbarrows and the owners of Shishkin have confirmed that they are donating £10,000 of their prize money from their @SportingLife Arkle victory to @WellChild #CheltenhamFestival pic.twitter.com/yWXI2lZTNC

Shishkin’s win provided trainer Nicky Henderson with a record seventh success in the contest, and he said: “You always hope for it, but you can never expect it. It is a strange place today and it’s going to be a strange week. It still doesn’t make it any easier watching them – it still gives you the same feeling. A winner is a winner, and they are very special.

“We always knew there was going to be that [plenty of pace]. We certainly knew Allmankind was going to be up there, but I didn’t know the other horse [Captain Guinness] was going to take him on there. They were going to make sure it was a very genuine gallop.

“He [Shishkin] has got a high cruising speed and he was always able to sit on their tails and he came wide but he had plenty of horse from two out, so he let him make his way home, but he was impressive the way he came up the hill.”

During his first stint as a jockey Ryan Mania captured the Grand National but had never recorded a winner at the Cheltenham Festival. That changed on Tuesday when he guided the game Vintage Clouds to success in the Grade 3 Ultima Handicap Chase.

Mania resumed race riding in 2019 having retired that November at the age of 25 citing problems maintaining his weight as the main reason and saying that he no longer got a kick out of winning.

Riding better than ever, Mania was recording his 32nd winner of the season at Prestbury Park as Vintage Clouds responded to every one of his urgings to hold off the challenge of Happygolucky to win by five and a half lengths.

Vintage Clouds’ trainer Sue Smith said: “I know he’s got round to being an 11-year-old now, but he’s always loved Cheltenham. He’s run very well in the race and got beaten there two years ago, but he’s an absolute star for us.

If at first you don’t succeed, try, try, try again!

“He’s a great jumper, and he just does love it round there. He’s been a very consistent horse for us over the years and he’s deserved every bit of that today – as did the jockey [Ryan Mania], who gave him a super ride.”

Mania added: “It’s an unbelievable thrill. It’s a shame that my first Festival winner comes under these circumstances, but it truly doesn’t matter. It will be a very memorable day.

“I rode Vintange Clouds in this race last year and he made a fair bit of noise coming down the hill. I said then he maybe needs a wind op, and he had a couple of runs this year and it became clear that he did need one.

“They sent him away for it, and, with the application of cheekpieces, it has just helped sharpen up his jumping. He used to spend quite a bit of time in the air, whereas today he was really slick over his fences, so they have really helped, the wind has helped, and luckily, he got his day today.

“I’m pretty sure this hasn’t sunk in yet, but in a way, I have been able to take it in a bit more without the distraction of the crowds. Never in my wildest dreams did I think I would come and ride a Cheltenham winner, especially so soon after coming out of retirement, so I couldn’t be happier.” 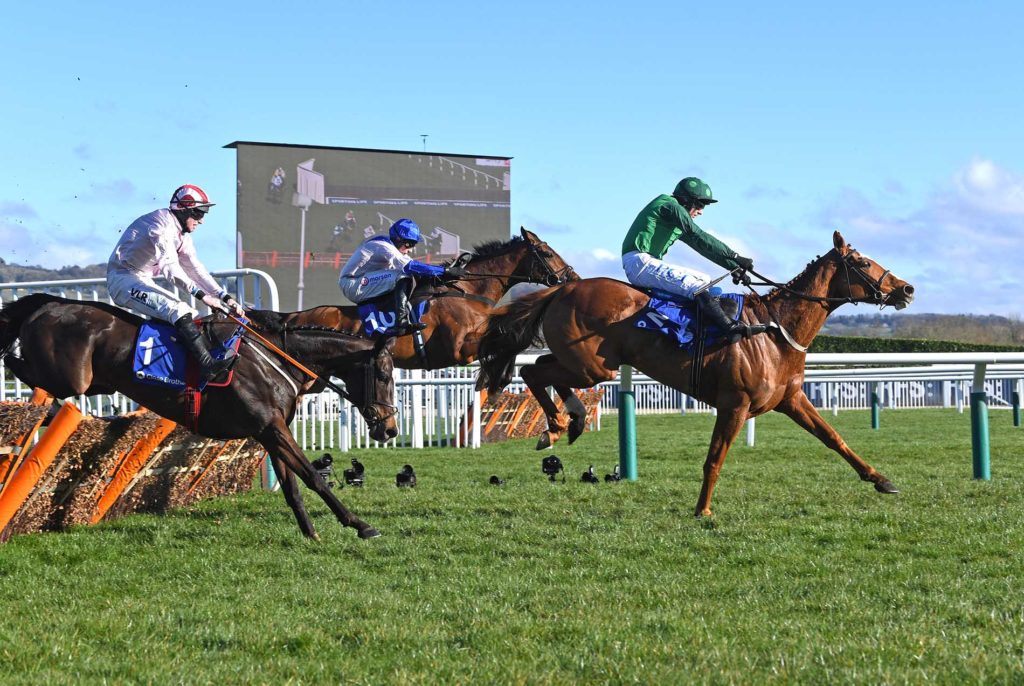 A galvanising ride from Jack Kennedy helped Black Tears to deny Concertista at the line in the Grade 1 Mares’ Hurdle and provide Denise ‘Sneezy’ Foster with her first winner at the meeting since taking over the licence from Gordon Elliott.

Kennedy was back in the winner’s enclosure after the closing race as he guided the Ronnie Bartlett-owned Galvin to victory in the National Hunt Chase that was named in honour of Cheltenham’s former Chairman Lord Vestey, who died earlier this year.

There was an 80-1 shock during Tuesday’s card as the Noel Meade-trained Jeff Kidder took the spoils in the Grade 3 Boodles Juvenile Handicap Hurdle under Sean Flanagan. 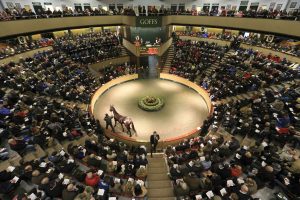 Up Next
Jacob West joins Goffs as new US agent