There is no stopping Rachael Blackmore as the jockey recorded her fourth Grade 1 win of the Cheltenham Festival with a sublime front-running ride aboard Allaho in the Ryanair Chase on Thursday.

With three winners already to her name, including the historic success on Honeysuckle in Tuesday’s Champion Hurdle, Blackmore allowed her mount to lob along from the start and his relentless gallop began to split the field.

Smooth, swift jumps down the back of the course began to put pressure on his rivals, which included Allaho’s stablemates Min and Melon. The question was whether or not Allaho and Blackmore would be able to keep up their frenetic pace into the closing stages.

That was answered when Blackmore opted to push for home after three out, leaving the field in their wake as a distinct advantage opened up prior to having to navigate the final two fences.

Allaho’s jumping had been a picture of perfection and the victory never looked in doubt as the pair cleared the remaining obstacles without a challenger in sight.

Blackmore could be heard encouraging her mount after the final fence, to make sure he did not idle up the run-in like he did in last year’s RSA Chase, and the pair scorched to a 12-length victory.

She said: “It’s incredible! I’m very grateful to be getting these opportunities. He put in a fair performance; he jumped and galloped everywhere. I never felt like I was out of my comfort zone anywhere. It was fantastic.

“I was happy to let my lad gallop and jump and it worked today. He was happy, travelling underneath me and comfortable [in front]; when they aren’t comfortable and you are forcing them, that’s when you are maybe going too quick.

“Every horse is different, and I was just letting him gallop and jump at the speed he wanted and trying to get breathers into him in a few places. I got a great thrill riding him. It takes a lot of the complication out of it, I suppose, with instructions like that. It’s fairly black and white and if it comes off, it’s fantastic.

“When you are riding for two powerful stables it makes a jockey’s job a lot easier, and I can’t tell you how grateful I am to be in this position and be getting these types of chances. You have to have the engine underneath you – it’s very hard to do it up that hill without the engine.

“How would I describe this week? Out of this world.” 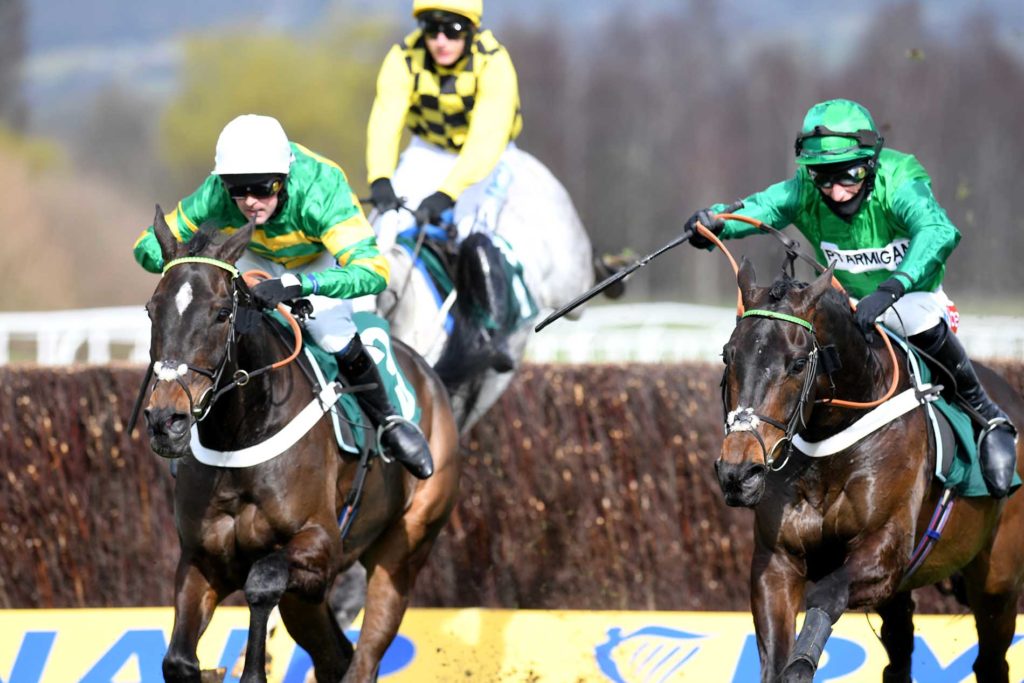 Trainer Wille Mullins added: “It was an awesome performance. I thought Min would go with him every bit of the way, but his jumping was just so slick and Min’s jumping was not up to scratch and we might have to look at that.

“Allaho did everything right. The first thing I did when Rachael came back in was lift her number cloth to see if the lead bag was in there as it looked like Allaho was just carrying Rachael around there! He was just awesome.”

There was a fifth win of the meeting for Blackmore when she combined with Henry de Bromhead and Kenny Alexander, owner of Honeysuckle, to win the Grade 2 Mares’ Novices’ Hurdle on Telmesomethinggirl.

Allaho’s victory was a second Festival winner of the week for Cheveley Park Stud following Sir Gerhard in the Grade 1 Champion Bumper, who like Allaho was ridden by Blackmore. The jockey will sport the Newmarket operation’s silks in tomorrow’s Gold Cup aboard A Plus Tard.

Earlier on Thursday’s card there had been disappointment for Cheveley Park when favourite Envoi Allen crashed out at the fourth fence in the Grade 1 Marsh Novices’ Chase.

Already a two-time winner at the Cheltenham Festival, Envoi Allen was bidding to extend his unbeaten record to 12 in what was his first start for new trainer Henry de Bromhead. But an uncharacteristic error left the race at the mercy of his rivals.

Chantry House, who had finished third in last year’s Supreme, made eye-catching progress to take the lead after jumping the penultimate fence before forging clear with jockey Nico de Boinville to win by three lengths.

It was a first winner of the week for owner JP McManus and do Boinville told ITV Racing: “He was third in the Supreme last year, all credit to the team at home for bringing him back. He slightly struggled in the soft ground round here in December and I’m just absolutely delighted. I hope Envoi Allen is alright.

“It’s great for JP and his team, they put so much work into the sport and it’s fantastic to get the job done. I didn’t even know [Envoi Allen] had come down. I was wondering when he was going to come pick me up in the straight, so it’s news to me when and where he went.

“Never discount Nicky Henderson round here, or ever. It’s been a tough couple of months, but the horses seem to be returning to form. Trust in the Guv’nor!”

“You’d have to think he might be going over three miles sooner rather than later. I don’t see why not – it depends on how quickly they recover from these races as to whether he can go on to Aintree – but it looks as though he will be looking for three miles. He was about in top gear all the way, but when he got there, he did it well and he quickened up well.” 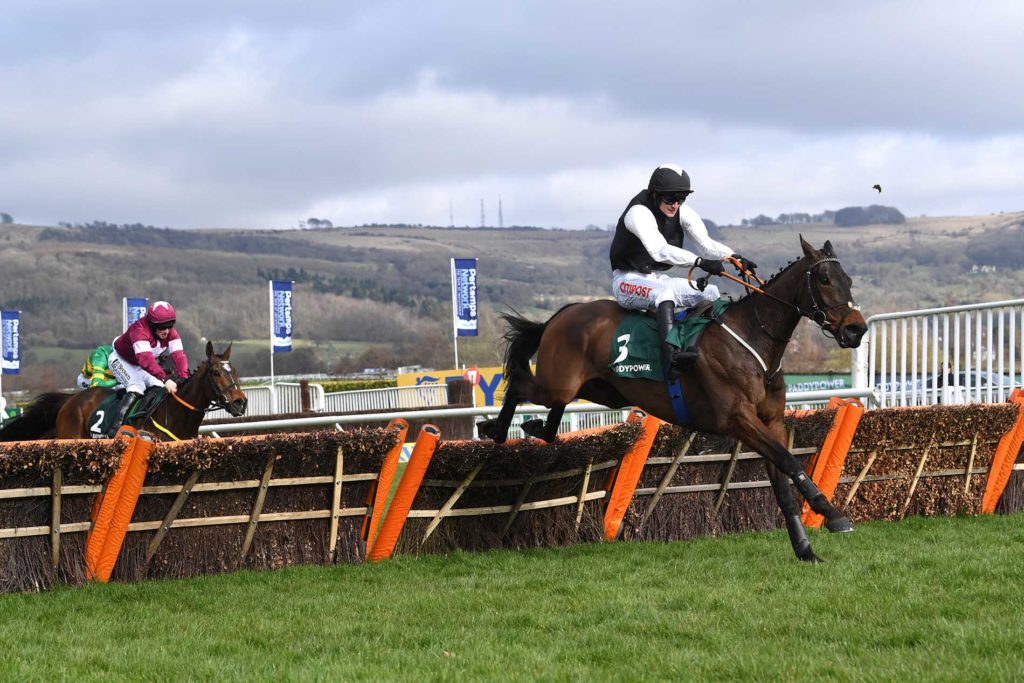 Flooring Porter was an impressive all-the-way winner of the Grade 1 Stayers’ Hurdle, a victory that owed much of its success to regular pilot Jonathan Moore who had decided to stand himself down from the ride on Thursday morning.

Having not recovered from a fall on Sunday, Moore was replaced by super-sub Danny Mullins and issued the instructions for Gavin Cromwell’s charge which Mullins followed to the letter.

After the performance, which had seen them win by a cosy three and a quarter lengths, Mullins said: “It’s fantastic. He is a very good horse. I got the call up maybe an hour before and in fairness to Jonathan Moore he gave me every little bit of information he had about the horse.

“Credit to him as he knew he wasn’t in good shape this morning and he stood himself down and that’s the mark of a great man that wants everything to go well. I’m sure he will be back in good shape for Punchestown and will be able to re-unite the partnership.

“It’s fantastic to get my first winner on the board at Cheltenham and being a Grade 1 as well. I’m really enjoying what I’ve got out of it today, but I’d say two per cent of the success is down to me and 98 per cent is Jonny, Gavin and all the team. He told me everything, but the horse will be racing in a few weeks so I’m not going to give away all the secrets now.”

Until Thursday, Cheltenham had not been a happy hunting ground for jockey Bryan Cooper as he endured a winless run that had stretched back four years. That was broken when he struck on the Paul Nolan-trained mare Mrs Milner in the Grade 3 Pertemps Network Final Handicap Hurdle.

Cooper said: “It’s great. I can tell you it’s been a lonely couple of years walking out of this place without any winners when you get used to riding them.

“I had her grand early doors, and she was jumping well, but I missed the third last and it just got a bit crowded, and I just had to sit and suffer. I knew I had a bit of pace, so if I did get knocked back a pace or two, I would get there easy enough.

“When you’re riding for these men [the Nolans] they don’t really give you instructions – they told me this morning ‘you’ve ridden enough winners here to know’. It’s great, they’ve been massive supporters of mine over the last couple of years and without them, I don’t know if I’d be here today to be honest.”

Prior to Mrs Milner’s success, Cooper’s last win at the home of jump racing had been on Road To Respect in the 2017 Grade 3 Brown Advisory and Merriebelle Stable Plate Handicap Chase.

Speaking about having to rebuild his career, Cooper added: “I had to start at the bottom and work my way up – there was nobody going to hold my hand and do it for me. I’m a big boy now and it was up to me to change things around and I’m just so grateful to be getting these rides, and to be riding for Willie here this week as well and getting the opportunities. I just have to start enjoying it now again.”

The Shunter lands bonus for Emmet Mullins and Paul Byrne

Connections of The Shunter were celebrating after their win in the Grade 3 Paddy Power Plate Handicap Chase also secured them a £100,000 bonus having won the bet365 Morebattle Hurdle at Kelso prior to success at Cheltenham.

Already the winner of the Grade 3 Unibet Greatwood Handicap Hurdle at the track’s November meeting last year, The Shunter provided both trainer Emmet Mullins and Jockey Jordan Gainford with their first Festival victories.

Mullins said: “He was very good today. He’s tough and durable, there doesn’t seem to be anything fazing him. It’s probably no great reflection on me, but at the time I thought he had to go for a beginners’ chase at Punchestown for horses rated 116 or less over hurdles.

“I wasn’t sure he’d be able to manage a normal beginners’ chase at that time off year, and to have come from there to here is an unbelievable journey.

“Jordan is catching everyone in Ireland’s eye at the moment. He’s very talented and the owner, Paul, was fairly insistent on claiming 7lb, and at that [level] Jordan was the only option. He’s very good and he showed that here today.

“It’s great from Kelso to give this bonus. Win, lose or draw, we always thought it was the right move to go to Kelso for the Morebattle Hurdle. It is a huge pot in its own right, and to go there and take on 13 others rather than go for the County Hurdle off the same mark and take on 24 was first and foremost. We got that one right, and it has just fallen into place since.”

In the Fulke Walwyn Kim Muir Chase, jockey Jack Kennedy, who had hit the deck when Envoi Allen departed at the fourth fence in the Marsh Novices’ Chase, landed Thursday’s closing race coming from last to first aboard the Denise Foster-trained Mount Ida. 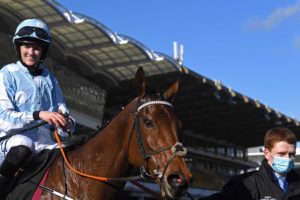