Tracks in Tier 2 will be able to accommodate 2,000 spectators from December 2

The prospect of racegoers returning to Cheltenham and other tracks next month moved a step closer on Thursday when the government revealed the tiers for the country when lockdown ends next week.

English racecourses that lie in Tier 2 zones can host up to 2,000 racegoers, which means Cheltenham’s International meeting on December 11-12 could see paying punters at the track for the first time since the Festival in March.

Other tracks in Tier 2 areas include Aintree, Ascot, Sandown and Newbury. Kempton also falls into the category, which means the Boxing Day fixture featuring the King George VI Chase could take place in front of a crowd.

The Wednesday, December 2 meetings at Ludlow and Lingfield are set to be the first to have the paying public back on course. Jockey Club Racecourses is yet to confirm whether Haydock and Kempton, which also race that day, will be ready to do likewise.

In a statement released on Thursday afternoon, the Racecourse Association said it “welcomes the return of spectators to English racecourses from Wednesday, December 2 and is supporting racecourses in preparing for this significant milestone.”

Overall thirty-five racecourses will be in Tier 2, with 16 racecourses in Tier 3 where only owners may attend under Covid regulations.

The RCA statement explained the process for those attending the races under the new rules. When visiting a raceday within a Tier 2 zone, spectators will be required to adhere to the following protocols:

• Purchase tickets in advance
• Provide full contact details for all within their party
• Wear a face covering at all times, unless eating or drinking
• Travel by private transport where possible
• Ensure social distancing from fellow racegoers outside of their household bubble

Racecourses in Scotland and Wales will continue to race behind closed doors for the time being. A further review of the national tier system will take place by Wednesday, December 16. 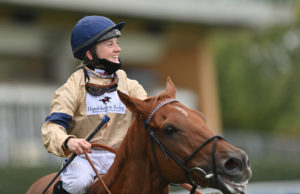 Up Next
Hollie Doyle named Sunday Times Sportswoman of the Year