British racecourses will have access to a further £6.5 million after the Levy Board relaxed rules around Capital Credits.

They will be able to waive payments allocated to them by the Levy Board and build up reserves, more commonly known as Capital Credits, which are ringfenced and used for future construction projects.

Waived funds cannot usually be liquidated by racecourses into cash payments but the Levy Board’s decision means that businesses will have access to finances to help those who have been impacted by the suspension of racing.

Alan Delmonte, Levy Board Chief Executive, said: “We want to provide flexibility around funds where possible, given the exceptional pressure on the sport while no fixtures are being staged.

“This now includes releasing Capital Credits balances to those racecourses that wish to have them for day-to-day cash requirements, rather than being only for use on capital development projects.”

Four plead not guilty to US doping charges

Four people arrested as part of the doping scandal that has left US racing shell-shocked pleaded not guilty on Tuesday to drug adulteration and misbranding charges.

Loui Grasso, a vet, supplier Donato Poliseno, trainer Thomas Guido III and assistant trainer Conor Flynn are accused of supplying performance enhancing drugs (PEDs) such as snake venom, sulker, ‘Bronk’ and ‘Red Acid’ for use on racehorses as well as covering up their creation and shipping with false prescriptions and labelling.

An indictment said: “Often, the con-conspirators submitted or directed others to submit prescriptions to pharmacies under the names and patient files of canine patients, in order to disguise the fact that the PEDS were in fact being obtained for illicit administration to racehorses.”

Geoffrey Berman, attorney for the southern district of New York, outlined in a letter that audio recordings between Grasso and vets Seth Fishman and Lisa Giannelli had been obtained.

Fishman and Giannelli have been named in a separate indictment that alleges PEDs were used by a number of trainers including Jorge Navarro and Jason Servis, the trainer of multiple Grade 1 winner Maximum Security.

Grasso and the alleged co-conspirators will appear in court on October 2 with prosecutors stating they will need six months to investigate the evidence against them.

Navarro, Servis and the other people named in the indictments last month have already pleaded not guilty to charges of misbranding and conspiracies to manufacture, distribute and administer adulterated or misbranded PEDs that were administered to racehorses.

Germany hopeful of May return for racing

Deutscher Galopp President Michael Vesper is hopeful of racing returning on May 4 following productive discussions between the racing authority and government officials.

The sport was planning to restart on May 1 but that was put back because of political restrictions due to the coronavirus outbreak.

Vesper said: “We have worked a lot in the past few days and have been in constant contact with governments, local authorities and the racecourses since then.

“We are also deliberately focusing on this week because we would then have the advantage that not much else is happening elsewhere, so we hope to boost betting turnover.

“On racedays without an audience, it is not so important that they take place at the weekend.

“It is fundamentally permitted to hold events such as racedays again from May 4. The regulations apply until May 3. We are now preparing to start then and talk to the municipalities and those who do have to decide.” 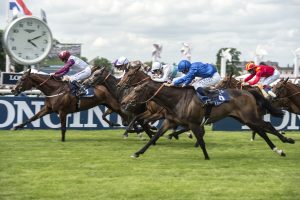 Up Next
Racing set to resume in France