Dual Group 1-winning stallion Mount Nelson has been acquired by Boardsmill Stud after a deal was struck with Newsells Park, where he stood for eight years.

The son of Rock Of Gibraltar was a smart performer on the racecourse for Aidan O’Brien and Coolmore. He won the Group 1 Criterium International as a juvenile before scoring in the Coral Eclipse as a four-year-old.

Since retiring to Newsells Park Stud in 2009, Mount Nelson has gone on to prove himself an adept stallion under both codes.

Out of Independence, he has sired 32 Group and Stakes individuals so far. These include Berkshire, an impressive winner of the Royal Lodge Stakes at two for trainer Paul Cole, and Librisa Breeze who has made giant strides over seven furlongs for Dean Ivory.

His highest rated son over jumps Penhill, was trained by James Bethell on the Flat before switching to hurdles under the tutelage of Willie Mullins. Only last month he won the Grade 3 Joe Mac Novice Hurdle at Tipperary under Ruby Walsh.

“Although we are sad to say goodbye to Mount Nelson, we are delighted that he is going to Boardsmill Stud where he will get every opportunity to cover a strong book of mares. Mount Nelson has been a good servant to Newsells Park, producing 32 Group & Stakes performers to date, including 7 Group or Stakes winners this year alone,” said Julian Dollar, General Manager at Newsells Park Stud.

He added: “He has proven himself a producer of top-class juveniles like Royal Ascot winner Berkshire and Purr Along, sprinters like Ninjago and Librisa Breeze and Classic & Group 1 performers like dual Oaks placed Volume. He can produce the most magnificent looking, athletic horses and I have no doubt he will receive great support with William and John Flood at Boardsmill.”

Bred by Cliveden Stud near Maidenhead, the 12-year-old has long been an attraction of William and John Flood at the County Meath-based stud. They eventually brokered a deal with Newsells with the help of Barry Lynch of Kert Lillingston Bloodstock.

He will be joining a roster which includes the Aga Khan’s high-class dual Group 1 winner Kalanisi and the French bred Califet, who has sired Gigginstown’s Grade 1-winning chaser Clarcam.

The team at Boardsmill have stated that Mount Nelson will compliment his neighbours nicely both from a physical and blood line perspective.

Watching his progeny race, they seem to like all types of grounds and he gets horses over all trips

John Flood of Boardsmill said: “Like most deals it took a bit of negotiating. Everyone at Newsells were very fond of and attached to Mount Nelson. He was the first sire they purchased to stand at Newsells and was the last horse purchased by the late Mr Jacobs, founder of Newsells Park Stud.

“I must say, Julian Dollar was very good to deal with and it is a testament to him and his team how well managed Mount Nelson was and how well he looked when he arrived at Boardsmill.”

He continued: “He is a magnificent looking stallion and is the most fantastic walker. Watching his progeny race, they seem to like all types of grounds and he gets horses over all trips. The fact they are tough and improve with age was a big attraction as well as the fact that he seems to get fillies as good as his colts.

“It would be no surprise to see his career under both codes continue to blossom. Plenty of his progeny have the physical attributes to make good jumpers and his stock seem to improve with age which is what most trainers, both NH and flat, like in their horses.”

A fee is yet to be announced for the 2017 breeding season. 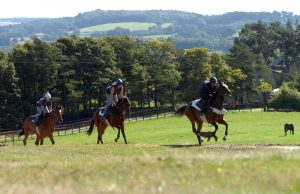 Up Next
Historic heartland