Following a winless 2010, Amour Propre has returned to the racetrack with renewed vigour this season, with his runner-up finishes in the City Walls Stakes and King George Stakes being topped by victory in the Flying Five at the Curragh on Sunday.

Bought for just 1,500gns as a yearling by his trainer Henry Candy, the now five-year-old son of Paris House was quick to belie his bargain basement price when reaching the track at two. His three juvenile wins culminated in a Group 3 success in the Cornwallis Stakes at Ascot.

Amour Propre’s natural speed drew comparisons to Airwave and Kyllachy, two other top-class sprinters to have emanated from Candy’s Kingstone Warren stables and the roll continued on his next start at three when he won the Palace House Stakes at the Craven meeting on his seasonal debut, for which he was given a career-high rating of 114.

The decision to retain Amour Propre at least year’s horses-in-training sales for 54,000gns now looks to be paying off with three extremely polished performances to his credit already this season.

Another battle-hardened sprinter to return to winning action at the weekend was eight-year-old Marchand d’Or, who landed Deauville’s Prix de Meautry.

With earnings of more than £1 million, his 12 victories include five Group 1s, three of which have been recorded at the Normandy track in consecutive runnings of the Prix Maurice de Gheest from 2006-2008. He has also won the July Cup and Prix de l’Abbaye de Longchamp. 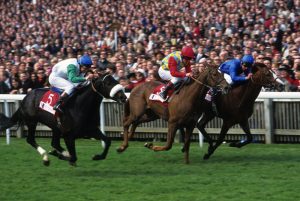 Up Next
Cirrus Des Aigles flying high for Even Top