Yearling sales on TV as new record is set
Stories

After a brutally cold winter, the fleece wraps are now off the Rowley Mile, and with the Craven meeting set to start in a week’s time, the team at Newmarket Racecourses has announced an increase in prize-money of £800,000 for the 2013 season.

“The July Cup is our one truly international race and the prize-money on offer is now equal to the Diamond Jubilee at Royal Ascot,” said Newmarket’s Head of Racing Michael Prosser. “We want to encourage the international horses to come here for the July Cup and for it to retain its status as the defining sprint in Europe.

“We also have aspirations to attract two-year-olds from America and all our Group 2 races for two-year-olds have increased in value from £60,000 to £80,000, apart from the Royal Lodge, which already had prize-money of £100,000.”

One of Newmarket’s two-year-old heroines of 2012 was on show on Wednesday morning ahead of her intended assault on the 200th running of the 1,000 Guineas on May 5. William Haggas paraded the Cheveley Park Stakes winner Rosdhu Queen at his Somerville Lodge Stables and indicated that she will be seen first in the Fred Darling Stakes at Newbury, in which she will not have to carry a penalty for her Group 1 success.

He said: “There’ll never be another Group 3 she can run in where she doesn’t have a penalty for her Group 1 win.

“What she did last year was remarkable. In the Lowther I didn’t think she’d stay but when they came to her she went again. I think she’s quite difficult to pass. She’s got guts. The Guineas will be a very tough race for her – her mother won over a mile as a two-year-old but there’s a lot of speed in the pedigree.”

With Johnny Murtagh being given first refusal for the ride on Rosdhu Queen, who won under four different jockeys when maintaining her unbeaten run last season, Haggas added: “She’s very straightforward and she thinks she’s good, which is half the battle. I’d never write her off.”

The Haggas team also has another filly with Classic pretensions in Lady Nouf, a daughter of Teofilo who won her sole start last season at Leicester in a seven-furlong maiden. She is owned by Saleh Al Homaizi and Imad Al Sagar who have already struck Classic gold with 2007 Derby winner Authorized and Irish 2,000 Guineas winner Araafa.

Her trainer said: “I think she’s useful. Her form is pretty strong but it’s maiden form. Her work’s been good and I haven’t yet got her off the bridle.”

Lady Nouf is likely to head to next Wednesday’s Nell Gwyn Stakes, which is being sponsored once again by Lanwades Stud. Kirsten Rausing’s Newmarket-based operation has announced a further commitment to racing at its local course and will also be sponsoring this year’s EBF Montrose Fillies’ Stakes, which is run on November 2, the final fixture of the season at the Rowley Mile. 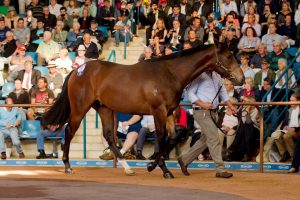 Up Next
Yearling sales on TV as new record is set