The late owner-breeder has left an indelible mark on the breed heralded by champions Dancing Brave, Frankel, Enable and many others

Prince Khalid Abdullah, who died on Tuesday at the age of 83, leaves behind an immense footprint on the Thoroughbred industry as the breeder of 113 individual Group/Grade 1 winners, among them 28 Classic winners.

In Juddmonte Farms, Prince Khalid Abdullah cultivated one of those rare self-sufficient entities. A group of early, significant purchases laid the foundations for the success that was to come and as various families came to be successfully developed, so the need to dip into the market and bolster the operation with outside purchases waned.

One of the beauties of Juddmonte is that a family is today instantly recognisable. Enable is the crowning achievement of the Fleet Girl family that joined the fold with the purchase of Ferrans Stud in Ireland from Dr Herbert Schnapka in 1982. Frankel, produced on a foal sharing agreement with Coolmore, hails from the John ‘Jock’ Hay Whitney stock bought on the advice of Jeremy Tree in 1983, as does the Peace family that is responsible for Byword, Proviso and Zambezi Sun. Then there is the remarkable success of Hasili, the dam of Dansili, Cacique, Champs Elysees, Heat Haze and Banks Hill, whose granddam Sookera was purchased from Robert Sangster.

Another matriarch, Slightly Dangerous, left behind the likes of Commander In Chief, Warning and Yashmak.

There have been many more – those descending from Bahamian, Mofida, Media Luna, Razyana, Monroe, Lost Virtue, Populi, Image Of Reality and her dam Toussaud to name but a few – that have contributed to Juddmonte’s standing as a titan of its era. In turn, it has become a brand that is sought after all over the world; in many cases, buyers are willing to pay a premium to secure access.

Similarly, breeders use its stallions in the knowledge that they will be supported by the powerful Juddmonte brand; Juddmonte can be credited with breeding the first Group or Grade 1 winner by ten of their past and current inmates.

Much of the early success can be credited to Humphrey Cottrill, in whom Abdullah placed his early trust, and Beckhampton trainer Jeremy Tree.

Tree was entrusted with Abdullah’s early string and in May 1979, sent out his first winner when Charming Native scored under Lester Piggott in a Windsor maiden.

Not long after, $50,000 yearling purchase Abeer became his first Royal Ascot winner when successful in the Queen Mary Stakes.

Waiting in the wings at Beckhampton was a son of In Reality purchased by Cottrill as a yearling for $225,000. Abdullah christened the near black youngster Known Fact and in May 1980, the hard-pulling colt provided the owner with his first Classic winner in the 2,000 Guineas, albeit on the disqualification of Nureyev.

Known Fact wasn’t a terribly successful stallion, firstly in Britain and then the US, but he went on to provide Abdullah with a first Group 1-winning homebred in Warning, which subsequently allowed him to become an important conduit for the Godolphin Arabian sire line.

He also heralded the beginning of an incredible association between Juddmonte and the top table of the turf. 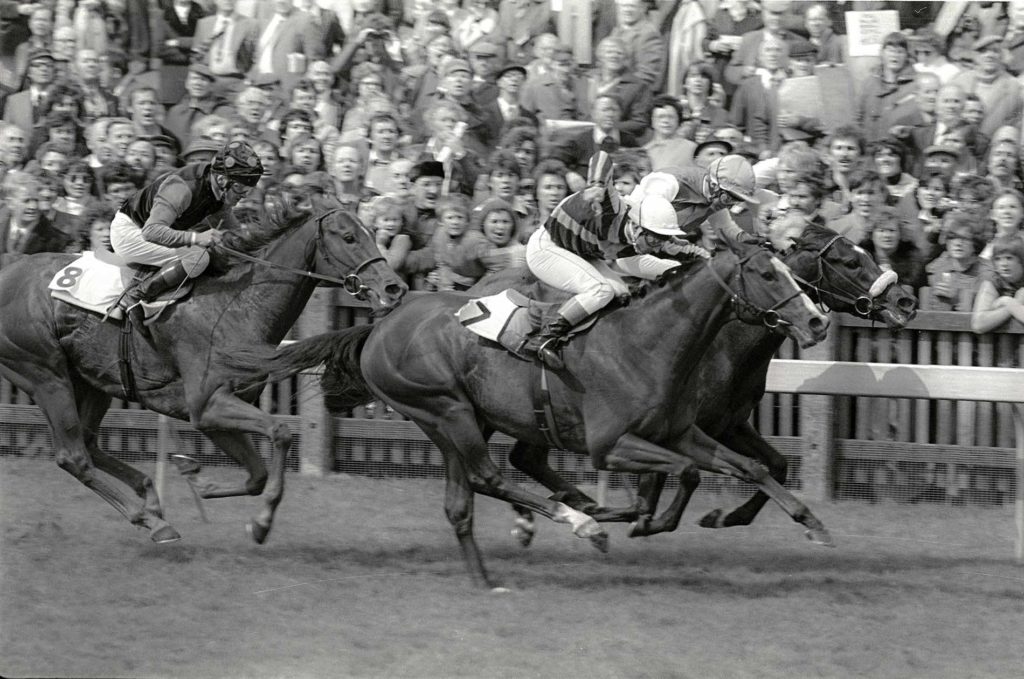 With the assistance of agent James Delahooke, such stars as Dancing Brave and Rainbow Quest swiftly followed.

Delahooke signed at just $200,000 for Dancing Brave at the 1984 Fasig-Tipton July Sale. It turned out to be a momentous transaction. Sent to Guy Harwood, the Lyphard colt was the star turn of the 1986 season, his brilliance defined by that outstanding winning kick in the Arc. Easy victories in the 2,000 Guineas, Eclipse Stakes and King George, not to mention that unlucky second in the Derby, sealed his place as a modern great and arguably the best to carry the pink and green colours prior to Frankel.

In Arc victory, Dancing Brave emulated Rainbow Quest’s success for Jeremy Tree the year before. Rainbow Quest was awarded the 1985 renewal on the disqualification of Sagace, having previously won the Coronation Cup in imperious fashion.

Dancing Brave and Rainbow Quest both retired to stud in Britain – Dancing Brave stood at Dalham Hall Stud while Rainbow Quest headed to Wargrave prior to making Banstead Manor Stud a permanent home – and were joined in due course by Warning, an excellent miler for Harwood whose victories included the 1988 Queen Elizabeth II Stakes and Sussex Stakes and 1989 Queen Anne Stakes.

In an illustration of how quickly Juddmonte developed into a powerful breeding force, Rainbow Quest’s first crop contained the homebred Derby winner Quest For Fame, whose dam Aryenne had been purchased by Delahooke during those early years. It was a landmark result for Tree’s successor Roger Charlton, who had sent out fellow homebred Sanglamore – out of Juddmonte’s first homebred Group winner Ballinderry – to win the Prix du Jockey Club just days before.

Similarly, Abdullah’s second Derby winner, the 1993 hero Commander In Chief, was also the product of two Juddmonte-owned parents, in his case Dancing Brave and Slightly Dangerous. Unraced at two, the sizeable colt made giant strides at three to win the Derby on his fourth start for Sir Henry Cecil before following up in the Irish equivalent. In all, 1993 was an annus mirabilis for Khalid Abdullah given that it also included the outstanding 2,000 Guineas winner Zafonic, Irish Oaks heroine Wemyss Bight and Group 1 performers Tenby and Armiger, who had run out the six-length winner of the Racing Post Trophy the year before.

“In an illustration of how quickly Juddmonte developed into a powerful breeding force, Rainbow Quest’s first crop contained the homebred Derby winner Quest For Fame”

Thus 13 years on from Known Fact’s Classic breakthrough and the Juddmonte brand was already operating at a significant clip of success.

That in itself pays tremendous tribute to the depth of its broodmare band, built upon a foundation of auction purchases and private acquisitions.

Alongside that, its stallion roster has never swelled to large numbers, instead generally holding steady at a select level in both Britain and Kentucky in line with the primary objective of standing a horse that could complement the broodmare band while offering appeal to outside breeders.

Commander In Chief, Workforce and Armiger were each sold to stand in Japan at the end of their racing days in transactions that looked to work out for the best.

Danehill, on the other hand, was the one that got away; sold to Coolmore at the end of his racing career, he went on become a breed-shaping stallion.

However, many of those that were retained for stud duty did become important influences.

Banstead Manor Stud, purchased from the Moriss family in 1987, housed an early success story in Rainbow Quest, the sire of 20 Group/Grade 1 winners. The son of Blushing Groom remains influential, particularly through his daughters.

Dansili is the sire of 21 winners at the top level, boasts high-class sire sons such as Harbinger and Zoffany, and is a successful broodmare sire.

Oasis Dream, meanwhile, remains an integral part of the roster with 17 Group/Grade 1 winners to his credit. His Group 2-winning son Showcasing is also a successful sire in his own right but Oasis Dream also continues to exert a real legacy as a broodmare sire; only last year, he featured as the damsire of Melbourne Cup hero Twilight Payment, Irish 2,000 Guineas winner Siskin and Prix Saint-Alary winner Tawkeel.

However, the presence of both Frankel and Kingman within the Banstead Manor stallion yard means that Juddmonte remains on a very strong footing.

Frankel exhausted all superlatives during his sublime career for Sir Henry Cecil and is now forging a reputation as a world-class sire at stud, primarily as the sire of 12 Group/Grade 1 winners. He cuts a striking profile by the figures as well, not only as the fastest stallion to reach 40 Pattern winners in history but in relation to a running statistic of 14% black-type winners to runners. 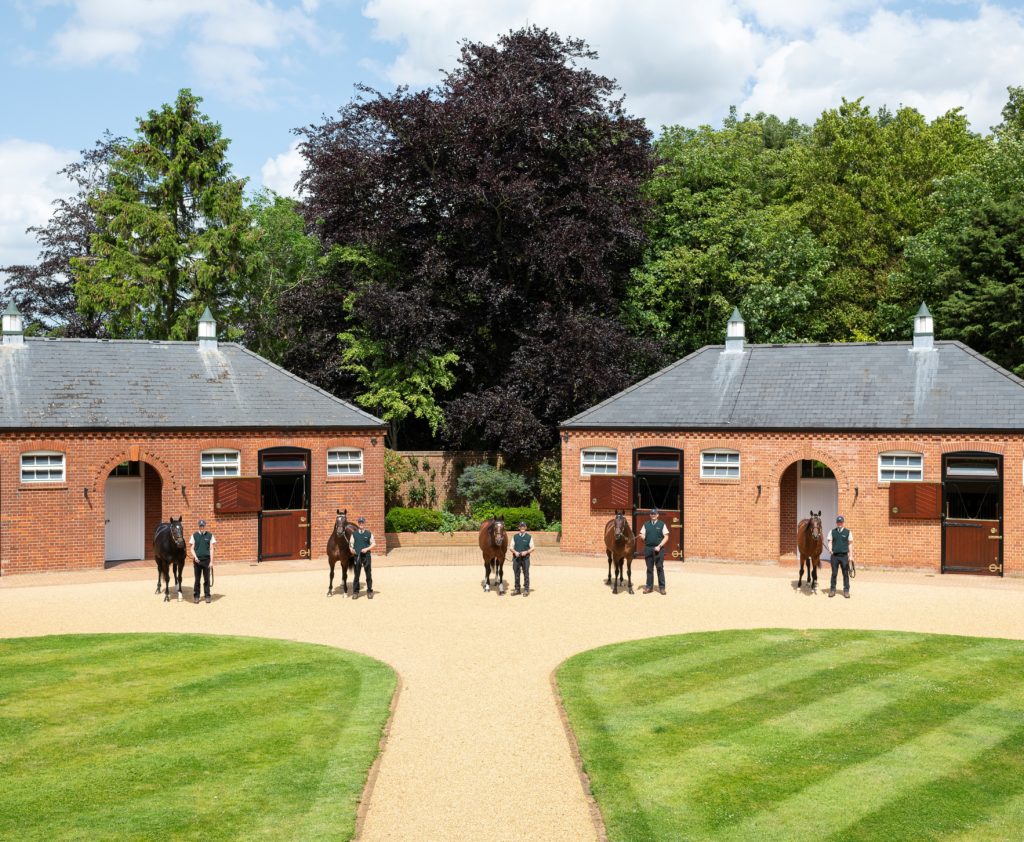 Kingman represents the essence of Juddmonte as the son of a homebred Classic winner in Zenda, herself a Zamindar half-sister to Oasis Dream from the famed Bahamian family. Kingman was a brilliant miler for John Gosden and it is striking how many of his better runners – think Palace Pier, Persian King and Calyx – possess a similarly strong kick. Like Frankel, his stock are keenly sought after all over the world and as such, his fee has risen from £55,000 to £150,000 in recent years.

The American arm, however, was dealt a major blow last year with the death of champion Arrogate, the richest racehorse in American history. A rare yearling purchase by the operation, Arrogate swept the Grade 1 Travers Stakes, Breeders’ Cup Classic and Dubai World Cup for Bob Baffert and leaves behind three crops, the oldest of whom have just turned two.

His death leaves veteran Mizzen Mast, a proven Grade 1 sire in his own right, as the sole stallion on the Kentucky roster.

At its peak, the Juddmonte portfolio consisted of eight farms; four in the UK, two in Ireland and two in the US. The original Juddmonte Farms in Wargrave was sold in 2017. Typically overseen by a team of long-serving staff, each farm has an important role to play, in particular the pre-training arm of Ferrans Stud in County Kildare.

Juddmonte heads into its next chapter with 40 years of excellence behind it, during which time it has drawn on the insight of a tightly knit team and that early fruitful investment in land and stock. Yet underneath it all, it was driven by the passion of one man, Prince Khalid Abdullah. Juddmonte was his creation and something for which he deserved to take immense pride. 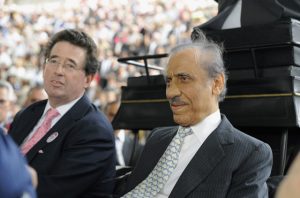 Up Next
Death of outstanding owner-breeder Prince Khalid Abdullah