‘Presenting racing is my dream job’

Ed Chamberlin, who will front ITV’s racing coverage next year, talks about his love of the sport

Charlotte and I get up just before seven as Polly, 10, and Sam, 7, need to be out of the house by 7.45 to get to school. I give Waffle, our springer spaniel, a quick spin in the garden and then check the sports headlines on my iPad while making a strong black coffee on my self-grinding machine, named Don Poli after last year’s RSA Chase winner. My winnings paid for the coffee maker!

I take the Times, Telegraph, Mail and Sun on my iPad so I can see what people are saying while I enjoy my coffee. I must admit I’m mad about coffee and love Brazilian beans. Breakfast is Alpen and fruit with another black coffee.

I enjoy doing the school run when Charlotte can’t do it, and afterwards take Waffle for a run on Broughton Down above where we live in Hampshire. My knees have never been the same since competing in the London Marathon so I am restricted to short, sharp runs.

Every work day is different. On Fridays I go into the office to plan the weekend shows, Super Sunday and Monday Night Football with my producer, Scott Melvin.

Saturday is generally travel day to wherever the football is, sometimes via a racecourse; I might drop in at Newbury or Sandown on my way to London.

On Sundays I need to be in the home ground studio by nine o’clock and I’m there all day at whichever match we are covering. Monday finds me in Sky’s high-tech studio and I don’t get home until one in the morning, with adrenaline still racing through me.

The day before Leicester won the league I spent the afternoon trying to equate what 5,000-1 was in racing terms. There’s nothing to match it, not even Foinavon’s Grand National. A victory like Leicester’s gives individuals and teams belief that they can do it. I’m a Southampton fan, so why can’t we go and do it?

Leicester’s feat is the greatest sporting story ever and to be presenting it was unbelievable. As good as it gets and right up there with the ‘Aguero moment’ when Manchester City snatched the 2012 title, and Sir Alex Ferguson’s last game at Old Trafford.

Lunch on the hoof means grabbing a Pret A Manger sandwich, otherwise at home I’ll try to be healthy and whip up some scrambled eggs. But I’d be talking a good game if I said I was eating healthy every day. Sometimes after a longer run or a trip to the gym I’ll spoil myself in the evening.

Football was not my original route into the professional world after reading politics at Exeter University, where, incidentally, in three years I didn’t miss a Newton Abbot or Exeter race meeting.

I joined the BHA Graduate Scheme, did work experience in Newmarket and wanted to go into racecourse management. Then I got sent to Ladbrokes for two weeks, stayed there for over three years and loved being an odds compiler.

I know my name has appeared in the betting to be the presenter of next year’s racing on ITV. It would be a dream job in many ways. This year my focus has been on the remarkable title race and finale to the Premier League season.

Racing is spoilt and at times doesn’t realise how lucky it is having such blanket coverage. It is brilliantly broadcast by Channel 4 and the two subscription channels, At The Races and Racing UK. You can watch every race, every day, and all three channels do different jobs in their different ways. It’s my afternoon escape and I love it.

I am going to Royal Ascot on the Tuesday, which is a completely different experience to Cheltenham, though I have to say nothing beats the Festival

I am going to Royal Ascot on the Tuesday, which is a completely different experience to Cheltenham, though I have to say nothing beats the Festival. But the pageantry and colour, together with the racing at Ascot, is something that we in this country do like nobody else.

Charlotte and I have supper at eight. She is a vegetarian and will cook what’s she’s having and I’ll add something to it. I enjoy sharing the cooking. But it’s my barbecuing skills that are second to none! Butterflied lamb is my signature summer dish and I rate fillet of buffalo from our local Broughton buffalo farm, better than any fillet of beef.

I’m in bed after watching the 10 o’clock news headlines and often read the next day’s Racing Post on my iPad. I still get terribly nervous before a show – as a result I’m a bad sleeper. I don’t use an autocue so I learn all my lines and wake up with the words swirling round my head the night before a game. After a match the adrenaline is still racing, making it hard to get to sleep.

I used to be a brilliant sleeper; now I’m hopeless. That’s the job, but I’m not complaining. 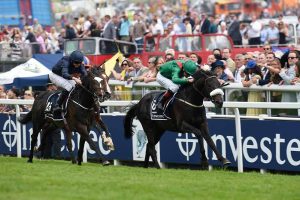 Up Next
A first Derby for Rosewell House