Alex Elliott was stretched all the way to £220,000 to secure a colt from the first crop of Darley’s exciting young stallion Harry Angel during the second and final session of the Goffs UK Premier Yearling Sale on Wednesday.

It was clear to see why the colt, who was consigned by Houghton Bloodstock as agent, had attracted plenty of interest given the way he walked around the ring and the early bidders included Clive Cox, who had trained Harry Angel to win the July Cup and Haydock Sprint Cup.

Elliott was a determined presence as the bidding increased higher and higher and he had to fend off Oliver St Lawrence, who entered the fray at the £190,000 mark, to secure the sale topper.

He said: “I’m absolutely delighted because first and foremost, apart from being an exceptional horse who was very hard for me to fault, the Thompsons have been very supportive of me. I’ve managed to buy them A Plus Tard and I’m delighted to buy a horse off Cheveley Park.

The Houghton Bloodstock consigned Lot 296, a colt from the first crop of yearlings of sale graduate HARRY ANGEL (@DarleyStallions) out of the L. winning mare RED BOX, is knocked down to @A_C_Elliott for £220,000. pic.twitter.com/XU8OkWfBAQ

“As for the horse, he was probably by the best horse this sales ring has ever seen. He’s out of a very fast mare, he vetted perfectly, and, in the back ring, which is where I like to watch them [go] round, he was a man against boys. I was all out but we’re pretty excited about him.

“It’s a new client of mine. We bought two fillies in Arqana and we bought one filly yesterday, the Mehmas, and then two horses today – a James Garfield and this guy.

“We think that there’s perhaps a little gap in the market with the passing of Sheikh Hamdan who was such an influential figure throughout the industry but especially at this sale. As I said yesterday, we’ve got the best bloodstock in the world and even if these horses just miss, they can still be very valuable commodities down the line.

“We’ll be open to trading but we’re trying to find the best horses. I’m just very grateful for the client backing me.”

Consignor Alice Fitzgerald’s draft of three yearlings was headed by a Starspangledbanner filly out of the placed Bated Breath mare Under Offer, who was acquired by Coolmore for £160,000.

Peter and Ross Doyle have had notable success in purchasing future stars from Redpender Stud over the years, think Canford Cliffs, Happy Romance and Toormore, and on Wednesday they purchased a £130,000 Dandy Man filly from the Irish operation.

The agents came out on top of underbidder Joe Foley, who stands the stallion at his Ballyhane Stud, for the yearling who is the first living foal out of the Frozen Power mare Nuclear Option whose further family boasts Group/Grade 1 heroine All Along. 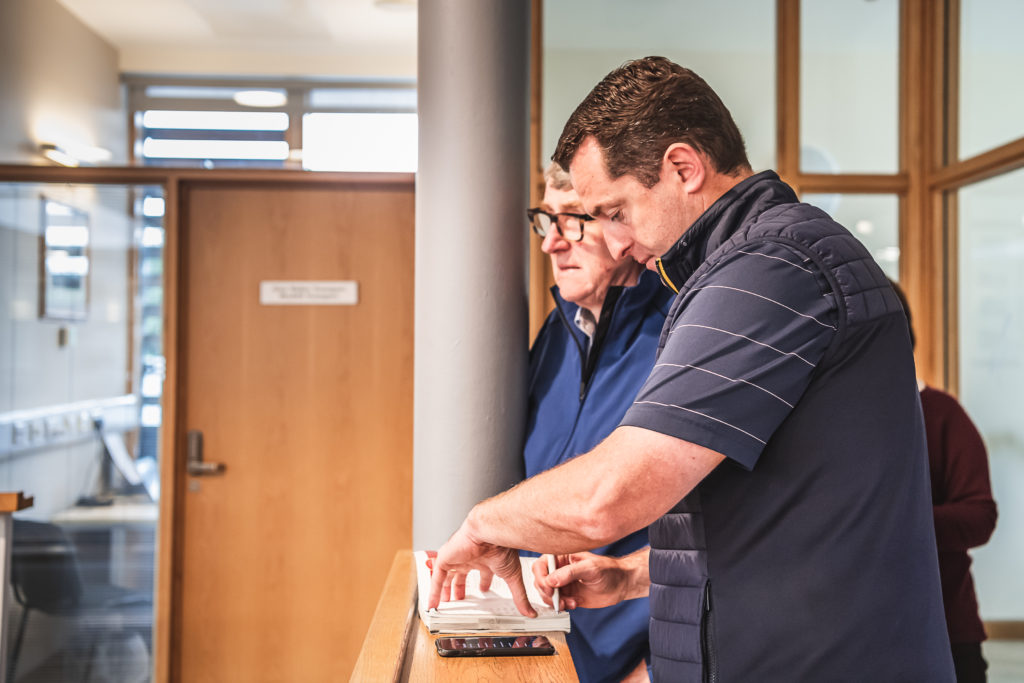 Ross Doyle said: “It’d be nice if she’s half as good [as Happy Romance]. Obviously, we had to pay a lot more for her, but she was probably the pick of the fillies in the sale for us and Richard Hannon told me not to leave without her.

“She’s just a bit different and stood out. She looks like she’s nearly two turning three physically already. She looks very mature and hopefully she’ll stay ahead of the posse.

“Luckily, we have a client who’s bought her and he’s a very good, loyal owner in the yard. We’ve had champions off them [Redpender].”

Early into Wednesday’s proceedings, trainer Richard Hughes struck at £125,000 for a Ribchester colt from Ballyhimkin Stud’s draft out of the King’s Best mare Mirabile Dictu. He is a half-brother to the winning trio Tres Belle, Ghzayel and Bonne Vitesse.

Ribchester has been represented by his first crop of two-year-olds on the track this year and has supplied 11 winners to date.

Of his new purchase, Hughes said: “I’ve done the rounds for two days and I thought he was the nicest horse here and just absolutely fell in love with his walk, the movement of him. He’s a solid big horse.

“Ribchesters – you’ve seen them at the breeze-ups, and they look like him so he’s going to be a fine horse. He’s very mature, strong. I own him at the moment so will have a few sleepless nights! I couldn’t help myself.”

Breeders Fiona and Mick Denniff secured their best ever result in the ring at the Premier Yearling Sale when their homebred Ardad colt out of the unraced Harbour Watch mare Pigeon Point was bought by Richard Brown of Blandford Bloodstock for £100,000.

Fiona Denniff said: “The mare, I bred her and as a yearling, we had something frighten them in the field. She was the first one out of the field and jumped two gates even though she was Flat-bred. We never raced her because she injured herself so bred from her instead.

“I was very lucky. I went to look at him [Ardad] when he came up to the sales and I just thought he was a lovely individual and would suit a few of my mares. I actually have a breeding right to him.

“We loved this one from day one. He was always so easy to deal with, very relaxed, never really put a foot wrong. Ed and his team have done a marvellous prepping him. Ed is only half an hour away from us – they stay at home right until they go into prep – and he had him eight weeks.

“I started to last year [use Whatton Manor for consigning] and it really suits because they’re so close and they do such a fantastic job.”

It was no surprise to see Brown secure the colt, given that he purchased the son of Kodiac for £170,000 at the Goffs UK Breeze-Up Sale in 2016 and at the 2021 renewal sourced the stallion’s first-crop son Perfect Power, winner of Sunday’s Prix Morny, for £110,000.

Brown added: “He’s been bought for Sheikh Rashid, Perfect Power’s owner, and he’ll go to Richard Fahey. He’s a smashing colt, there’s a lot of Ardad in him and the temperament of these Ardads is unreal.

“He looked like a real, cool dude walking round there and did a really good show out there. Obviously, we were slightly romantic after the weekend but in his own right, he’s a smashing young colt by a really exciting stallion. We’re delighted to get him.”

Brown struck later on in the session for the sale’s second top lot, a £210,00 colt from Tally-Ho Stud who is by the operation’s flagship sire Kodiac out of the unraced Pivotal mare Stunner.

He added: “He’s going to Richard Fahey and is for Sheikh Rashid’s brother, Sheikh Juma. He wanted to find one nice colt for Richard at the sale and his brother obviously had a very good weekend.

“This was a horse that we sort of fell on together, from a top-class farm that we’ve obviously had a lot of success from.

“He looks very forward; a very early foal out of a Pivotal mare and he’s a smasher. That’s further than I thought we’d have to go but Sheikh Juma showed great resolve and we’re delighted to get him.

“He was really the only horse in the sale that we were focussed on buying.” 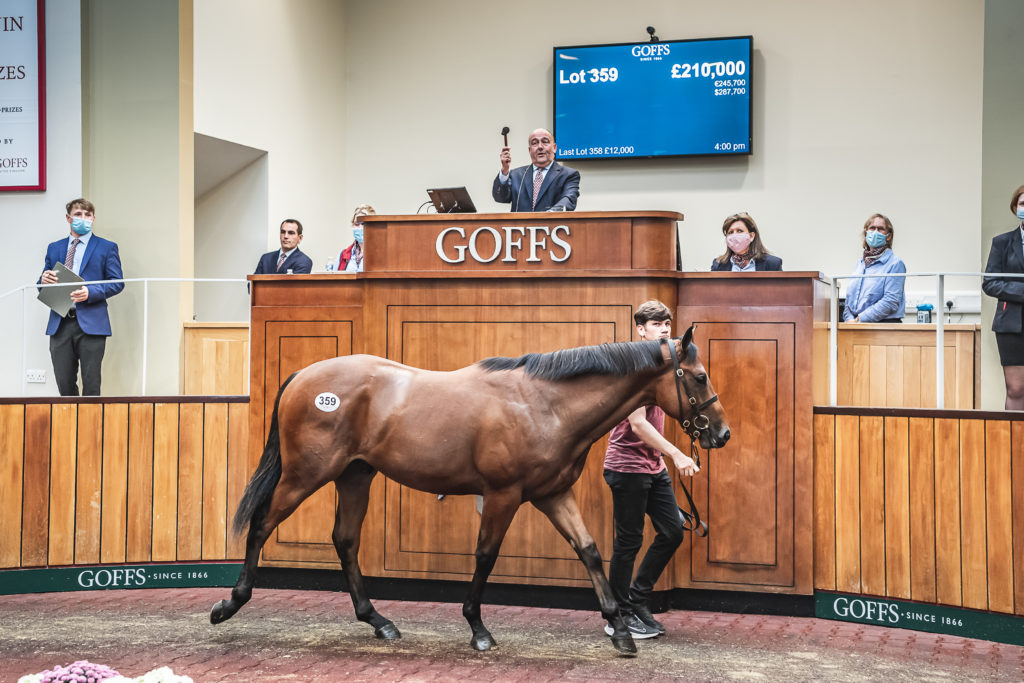 Reflecting on the auction, Goffs UK Managing Director Tim Kent said: “The Premier Sale is back on track! Last year’s sale endured its own Covid related challenges but, with the help of a very loyal band of vendors and purchasers, we’ve seen a remarkable trade over the two days and proved to everyone that 2020 was a one-year blip due to circumstances beyond anyone’s control.

“The car park has been overflowing since Sunday morning and the footfall of genuine buyers has been incredible. There has been a real buzz around the Sales Complex over the last few days and it’s great that this has resulted in trade which started well yesterday, finished strong last night, and kicked on again today.

“The impressive 89 per cent clearance rate shows the demand for Premier Yearlings is as strong as ever. The fact that the 13 six-figure yearlings were purchased by 11 different buyers demonstrates the diversity of the buying bench associated with this sale whilst our policy of going ‘back to the future’ when selecting the traditional ‘Donny yearling’ has clearly proved popular with buyers.

“It’s also rewarding to see the sale topped by a son of Harry Angel – a brilliant sprinter who we sold at this sale in 2015. The Premier Sale has proven its ability to produce the very best, having also sold the likes of Dark Angel and Wootton Bassett, and to see them excel at stud is a great advert as to what can be found at this sale.

“We’ve said this before but it is never more relevant than today; we simply cannot do with without our clients. Without them, we are nothing and we would like to thank all of our vendors for putting their faith in the Goffs UK team.

“We are absolutely delighted that this loyalty has been well rewarded, and we wish all purchasers the best of luck with their new racehorses. We are already looking forward to next year, when we will see the next star graduates emerge, and build again on two great days in Doncaster.” 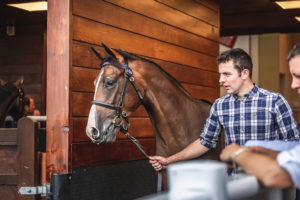