Potters Corner, an impressive winner of last year’s Welsh National, will bypass the 2020 renewal later this month as trainer Christian Williams pinpoints his stable star towards the 2021 Grand National.

Revealing the news on his website, Williams said: “After a lengthy discussion with the owners of Potters Corner it has been decided to scratch the horse from the 2020 Coral Welsh National.

“Having won the 2019 running it would have been brilliant to take him back to defend his title, but we have made no secret the Aintree Grand National is our main focus for this season. Following his success in last year’s race it was evident the stamina-sapping contest left its mark, and it took a lengthy period of time to get Potters Corner back to his usual self.

“To hopefully give him some longevity we’ve decided to go down the cross-country route so successfully navigated by Tiger Roll in previous years. Therefore, he’ll receive an entry for the Glenfarclas Cross Country Handicap Chase at Cheltenham on December 11.

“All being well, Potters Corner would then head back to Cheltenham for the Festival next March and then on to Aintree in April.” 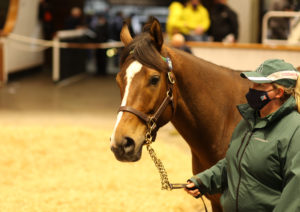 Up Next
Aunty Bridy makes 410,000gns on opening day of December Mares Sale