Richard Brown of Blandford Bloodstock has final say at 135,000gns

A colt from the first crop of Group 1 winner Postponed found favour to top the Tattersalls Guineas Breeze-Up Sale when selling to Richard Brown of Blandford Bloodstock for 135,000gns on Friday.

Bought as a foal for Peter and Ross Doyle Bloodstock for 20,000gns at the 2019 Tattersalls December Foal Sale, the colt is the fifth foal out of the winning Malibu Moon mare Micaela’s Moon, herself a half-sister to the dam of Group 1 winner No Nay Never.

Brown revealed that the colt, who was offered by Glending Stables, was purchased for resale syndicate Never Say Die and is set to go into training with David Simcock.

He said: “A client bred Postponed, so I have followed him all the way through, and I am giving him a big chance. He did a cracking breeze. He just showed a great action, it wasn’t a speedy breeze, but it was the style he did it in, he has a good attitude.

“No Nay Never is sitting there under the second dam, the fact that he is so high up in the page, I really liked that. I don’t see this horse running until August or September, he is a horse for the future.

“David is on his way to Goodwood, so he has no idea that we have bought him or how much we gave so I might be in for a bollocking! I just thought he is a smashing horse.

“The syndicate is all about resale. We aim to sell as three-year-olds. The two really smart ones we have got now are three-year-olds and we still own them, but they are there for resale. The ten people involved are all friends and clients, it has been fantastic. We had Teppal who won the French Guineas.

“At the moment we have two really smart horses, Man Of Riddles and Onesmoothoperator, both won on their debuts and are getting ready to go again. Man Of Riddles will have an entry in the Cocked Hat Stakes and we are sort of dreaming a bit with him. There are great people involved in the syndicate and I think they will be really excited with this horse.”

There was a fantastic result for Irish-based jockey Ian McCarthy with his Mehmas colt out of Cheworee, the only horse he prepared for the breeze-ups this year, when he was bought by David Redvers for 105,000gns.

McCarthy said: “He is a horse who has a had a great preparation and we’ve liked him all along. We’ve had plenty of interest the last couple days, he did a lovely breeze ridden by Micky Cleere, and he is by the right sire, isn’t he?

“Gerry McCormack pinhooked him as a foal or €3,000, it is luckily enough now that he was not sold as a yearling! I prepped him for us, he has been very straightforward. As time went on he just developed, he got much stronger and through the last eight weeks he has really turned a corner – he takes his work well.”
Breeze-up consignor Robson Aguiar was responsible for two lots that were purchased by trainer Michael O’Callaghan in the shape of a 95,000gns Magician colt and a Postponed filly who sold for 82,000gns.

Of the Magician colt, O’Callaghan said: “The Magician is a lovely horse, he did a good breeze, he was very professional. He came highly recommended, everything was right about him, he had a good vet, the whole lot. He is bred to be a miler, but he has plenty of pace as well so we will kick on with him. A nice type of horse.”

Aguiar was on hand to reveal more about the Postponed filly and added: “She is by a first-season sire, she was late in Book 3. She caught my eye in the ring and I spoke to her consignor [Sophie Buckley of Culworth Grounds] and she recommended her.

“The filly’s grown a lot, she is a late foal born on May 21 and there’s a lot of improvement in her. She will be a late season two-year-old and I think she will be a class filly as a three-year-old.” 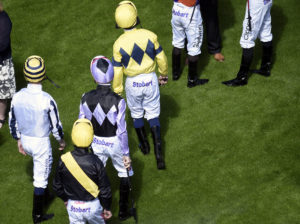 Up Next
The Owner Breeder joins sport’s social media blackout