Monsun died last September at the age of 22 but his influence will continue to be felt for seasons to come as was amply illustrated by a Group 1 double for his offspring at Longchamp on Sunday.

Five-year-old Maxios got the better of Planteur to land the Prix d’Ispahan, following on from his success in the Group 2 Prix d’Harcourt last month.

The Wertheimers’ Silasol, whose dam Stormina is a half-sister to Arc winner Solemia, proved that she has trained on from her debut season top-level win in the Prix Marcel Boussac, landing the spoils by just a head in the Prix Saint-Alary.

Another of Monsun’s offspring had a hand in the winner of the Oaks d’Italia, his 2007 Horse of the Year son Manduro being the sire of Charity Line, who gave Stefano Botti back-to-back Classic successes following on from last weekend’s win the Derby Italiano with Biz The Nurse.

This season alone, Monsun has already supplied the winners of eight Group races, with Triple Threat landing the Prix La Force, Pirika the Prix d’Hedouville, Ocovango the Prix Greffulhe and Novellist the Grosser Preis der Badischen Unternehmen in Monsun’s home country. Another significant winner has been the Queen’s Estimate, who may well represent her owner in the Ascot Gold Cup after her tenacious victory in the Sagaro Stakes earlier this month.

Of more pressing interest, however, will be the first British start for the French-trained Ocovango, who bids to give Andre Fabre his second victory in the Derby on Saturday. The British-bred colt is a graduate of Lord and Lady Lloyd-Webber’s Watership Down Stud and is a grandson of their Group 1 Fillies’ Mile winner Crystal Music. 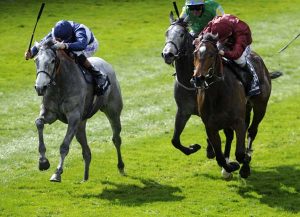 Up Next
Saluting the Judge