Positivity the key in quest for success

The breeder registration stage of BOBIS closed at the end of February with over 3,000 yearlings and two-year-olds entered. We anticipated that two-year-old registrations would be slightly less than the yearling registrations and this proved to be right. Shrewd breeders and connections rightly identified those horses whose careers were on target and were likely to be campaigned in Britain. Whilst breeders of yearlings still have time to register their stock, the response from those who took advantage of the reduced fee of £150 suggests that the take-up will certainly grow in the second year of the scheme.

I am not minded to contrast and compare this outcome. I would rather we find a solution to the fact that there are now two schemes for breeders and vendors in 2013. I would, however, like to acknowledge that a great deal of effort was made in a short space of time to get this far, and thank James Oldring, who stepped into the role of Project Director, and with support from Weatherbys, the TBA executive and the BBM team, got the message across that with a total potential prize fund of £2.5 million in 2013, BOBIS deserved support.

Breeders understood that with a potential 2013 prize fund of £2.5 million, BOBIS deserved support

With 420 eligible races in 2013 and a further 430 races added in 2014, BOBIS will distribute a far greater reward to Flat breeders than the Breeders’ Prizes Scheme. Undeniably, the Breeders’ Prize Scheme was a victim of numerous funding cuts over the years and, although we fought hard to retain it, I believe that BOBIS will be more effective in changing behaviour and, importantly, incentivise owners to retain their broodmares in Britain.

On this month’s theme of accentuating the positives, March 4 saw the annual Godolphin Stud and Stable Staff Awards, which are now in their ninth year, with nominations reaching their highest ever number. I would like to congratulate Cheryl Cory (Goldford Stud) and Laura Hamilton-Smith (Chasemore Farm), winners of the Stud Staff Award and David Nicholson Newcomer Award respectively.

Another industry positive was the recent launch of Great British Racing. GBR’s Chief Executive Rod Street presented Racing Enterprises Ltd’s plans to take Racing For Change to the next stage to the TBA Board last month. Mixed early reactions to Racing For Change have abated and, although detractors cited the ‘Frankel factor’ as the reason for the tremendous success of the new Champions’ Series, the marketing and promotions side of the industry has helped to improve racing’s public profile.

Racecourse attendance grew by 7.5% between 2009 and 2011, with a record 6.1 million people going racing. A commitment from QIPCO to sponsor the British Champions’ Series until 2017 was fantastic news and, together with Investec’s commitment to sponsor the Derby extended to 2022, British racing now has a marketing function to instil confidence.

In February I outlined plans for the inclusion of British Bloodstock Marketing in this new structure and, with enhanced resources and professional support geared to encourage the purchase of bloodstock and to promote the excellence of our breeding operations, GBR’s focus will include the ‘Buy in Britain’ and ‘Breed in Britain’ message, supported by an overall marketing budget of £1m, funded by REL, the BHA and the Levy Board. The TBA will complement this marketing resource, with breeders and stud farms seen as essential participants, and we look forward to developing this relationship.

Closer to home, the Flat season starts this month. The recent announcement from the European Pattern Committee that the seven-furlong Rockfel Stakes would switch to three weeks before the Fillies’ Mile is a sensible and progressive move.

The forthcoming breeze-up sales will be one of the early indicators of the health of our industry. Whilst the economic situation does little to encourage investment, I believe that the range of initiatives that British racing has undertaken demonstrate that for the first time the industry has approached this with professionalism and, importantly, realistic funding resources. Time will tell. 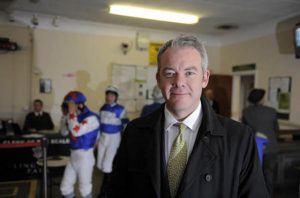 Up Next
Learning to juggle