Politologue on point in Grade 2

With only a week to go until Christmas, Paul Nicholls looked to unwrap a star of the future as his five-year-old Politologue took no prisoners in the Grade 2 Mitie Noel Novices’ Chase.

Under Sam Twiston-Davies, the grey took his three rivals along from outset, attacking the first fence.

The Colin Tizzard-trained Royal Vacation was his nearest pursuer early on with Grade 3-winning hurdler Rock The Kasbah a few lengths off in third.

As they raced out of Swinley Bottom second time around, Rock The Kasbah tried to apply pressure on the leader with Richard Johnson in the saddle. Almost level four out, Politologue then winged three out under a motionless Twiston-Davies and the pair drew clear by seven-lengths.

Neat jumps over the final two fences saw Politologue idle to a comfortable four-length winning margin from the Philip Hobbs-trained Rock The Kasbah.

The son of Poliglote was stepping up from his ten-length debut win over fences at Haydock a month ago, and looked to take this two-mile-and-five-furlong prize very much in his stride.

“Sam said he idled after the back of the last. We always knew he’d be good over fences. He was just a big, raw four-year-old last year, but he’s shown us plenty since he’s come back in this season and it was nice to see him do what he did at Haydock first time out,” reflected Nicholls.

He added: “It’s unlikely he’ll go for the RSA, but he could go for the two-and-a-half-mile race (JLT). I’m not that keen on going three miles yet, but he will get three miles, no doubt about it.

“I’m really focusing on next season and just minding him for that. These horses are for the future for us and we do not want to over-face them this year.”

The champion trainer has now taken the last three runnings of this contest with his stable jockey in the plate. Ptit Zig and Le Mercurey, both owned by Chris Giles and Colm Donlon, took the 2014 and 2015 renewals.

Politologue’s owner, John Hales said: “I said when he won at Haydock that was the finest first round of novice jumping from any that I have ever had, including One Man. This one is hopefully a bit special.”

He was just a big, raw four-year-old last year

It was a red-letter day for the Ditcheat team as only half-an-hour earlier their Novice hurdler Capitaine landed the Grade 2 Kennel Gate Hurdle.

In similar fashion, the son of Montmatre lead from flag-fall and developed a healthy lead over his rivals early on.

Sporting blinkers and a noseband the four-year-old kept on well for Twiston-Davies, beating his stablemate Captain Forez by just over three lengths. 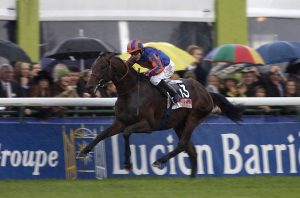 Up Next
Hurricane Run passes away aged 14