Leaving aside personal satisfaction – not an easy matter considering that my day job has been lifted by the deeds of Taghrooda, Mukhadram, Muhaarar and others – 2014 has been a good year for the TBA board and executive in our mission to provide meaningful support for all members.

Publication of the Economic Impact Study early in the year marked the release of perhaps the single most important piece of work ever put together by the TBA. It provided an enormous amount of independently verified statistical information, most notably demonstrating the crucial role that small breeders – those with two or three mares – play in providing the raw material for the British racing industry and beyond.

A study of this kind is of no real benefit if it is not accepted outside the confines of those who commissioned it, and I am delighted that the EIS was well received across the board.

Acceptance by the Levy Board, for instance, was important. It means now that when we go to them and the BHA to discuss matters affecting breeders, we are armed with factual evidence, independently verified, which underpins our arguments about their plight, especially among National Hunt breeders.

Nor is it of any value if such a study is pushed to the back of a drawer and forgotten after the initial rush of interest. It has to be acted upon. In the case of the EIS, we have already added the findings to our ongoing work on a scheme that centres on National Hunt mares and will provide financial support in this crucial area of breeding.

The EIS will continue to be a vital tool in the executive’s kitbag, particularly when they and board members tackle the job of political lobbying. This often unseen, unsung area has become increasingly important, and its emphasis is unlikely to shrink in the near future. Dealing with the government and the EU does not work like that!

The opening of the thoroughbred export market to China, the retention of notifiable disease status for CEM and EVA, and continued entitlement to single farm payments for stud properties, following the CAP review and reform – none makes headlines in the way that a big-race win or a major sale might do, but they were all achieved with painstaking effort and contact through individual lobbying.

Change is not always for the better, and the government’s approach to one part of its Red Tape Challenge was a good example. In seeking to remove notifiable disease status for CEM and EVA, they hoped to save money, but if they had looked more carefully they would have realised that there wasn’t any money to save.

Worse still, though, getting rid of this element of so-called red tape would have been severely counterproductive. The TBA and Tattersalls, which added its weight to the campaign, estimated it would have resulted in the loss of £30 million of annual overseas trade.

EU deliberations also present serious challenges, and with a new intake of MEPs taking their place after the May elections, we have put time and effort into refreshing old links and making new ones. Interestingly, among the latest batch of newcomers to the Brussels MEP roster is Jane Collins, who stands out from the crowd on two counts. She is a member of UKIP and, probably more significantly, a very keen horsewoman.

As far as next year is concerned we will need to keep a close eye on the general election, ensuring that whatever the outcome we demonstrate the breeding industry’s value to the rural economy and the significant opportunities it creates for inward investment. Similar messages will be conveyed closer to home, as part of the TBA’s shareholder role in the Horsemen’s Group, where we will continue to monitor British racing’s structure from within.

The BHA is undergoing huge structural change, and we will have to get to know, deal with and establish a good relationship with a new team, particularly ensuring that the four new independent directors are aware of and alive to the interests of thoroughbred breeders. 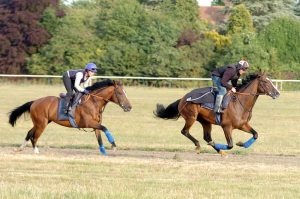 Up Next
Epiphaneia with facile Cup win