After months of deliberation and discussion, details of the new Plus 10 scheme, which is set to replace both the British Owners and Breeders Incentive Scheme (BOBIS) and Racing Post Yearling Bonus Scheme (RPYBS), have been announced. The £5.5 million scheme will provide bonuses of £10,000 on 460 two- year-old races in 2015 – 100 of which will be run in Ireland – with that figure set to rise to 550 in 2016 when three-year-old races will also be incorporated.

With many horses already signed up to BOBIS, Plus 10 will operate alongside that scheme in 2015, while the RPYBS will be phased out over the coming year. Thoroughbreds are eligible for Plus 10 if they are by a British or Irish-based stallion or out of a mare who resides in either Britain or Ireland. In common with BOBIS, there is no limit to the number of Plus 10 bonuses a horse can win.

“The launch of Plus 10 marks an important development for the British and Irish bloodstock and racing industries,” said Julian Richmond- Watson, Chairman of the Plus 10 Committee. “By combining with Ireland we are able to offer larger bonuses, spread across a more targeted cross-section of races which will expand to cover both the two- and three-year-old racing seasons.”

Plus 10 has already received a major vote of confidence from Darley, which has studs in Britain and Ireland as part of its global breeding operation, and has thus far signed up 332 foals to the scheme.

Sheikh Mohammed’s bloodstock advisor John Ferguson said: “As well as providing welcome prize-money bonuses to owners and breeders in Britain and Ireland, Plus 10 also recognises operations like Darley which operate across multiple jurisdictions. It enables owners to purchase bloodstock with the knowledge their ownership experience will have the added benefit of racing for Plus 10 bonuses across their two and three-year-old seasons.

“We believe Plus 10 will positively impact breeders large and small due to the incentive it offers people to invest in British and Irish bloodstock and by rewarding those who opt to race locally. As a mark of our support for Plus 10, Darley has registered 332 foals into the bonus scheme, ensuring our clients have the opportunity to enhance their racing returns.”

Stage 1 registration is completed by the breeder when the horse is a foal (by September 30 of that year) and will cost £150 or €187.50. Another payment is required when the horse is a yearling, by either its breeder or owner if it has already changed hands, and that will cost £200 or €250, payable by December 15. The final stage of registration comes in the horse’s two- year-old season when a fee of £350 or €437.50 is required by March 31. The person who has paid the foal registration will receive 10% of any Plus 10 bonuses won, as will the payee of the yearling stage, while 75% will go to the person paying the final-stage registration. The remaining 5% of bonuses will be paid to the trainer, jockey and stable staff.

The proximity of the scheme launch to the first British yearling sales at Doncaster – the Premier Sales on August 26 and 27 plus the following day’s Silver Sales – means that the catalogue pages for those yearlings will not carry the logo for eligible horses as the catalogues had already gone to press. All horses already signed up to BOBIS are automatically eligible for Plus 10 and others can be made eligible prior to appearing in the sales ring.

Members of the Plus 10 team will be busy on the phones to vendors between now and then, along with upholding their pledge to Doncaster Bloodstock Sales (DBS) to have a strong presence in Doncaster throughout the auction days. Door cards and rump stickers will also be provided for all eligible lots.

Henry Beeby, Managing Director of DBS, said: “We’re a little disappointed that this wasn’t sorted out sooner – and we did offer to delay the printing of our catalogues by four or five days. However, we’re appreciative of the promised pro-activity of the Plus 10 team both before and at the sales.”

In order for this season’s yearlings to be eligible for Plus 10 races next year, they will need to be signed up to the scheme by September 30. Further details can be found at www.plus10bonus.com. 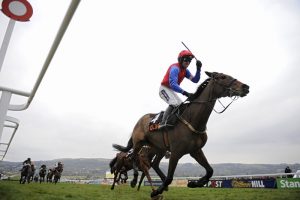 Up Next
Grade 1 race for mares at Cheltenham