Place on top in Boyne Hurdle

Sutton Place, one of Ireland’s most promising young hurdler’s, continued his upward momentum by the landing this year’s renewal of the Grade 2 Ladbrokes Ireland Boyne Hurdle.

A race which has been won by the likes of Cheltenham Gold Cup hero War Of Attrition, the six-year-old gelding was looking to extend his winning sequence to five.

Held up in mid-division by Barry Geraghty, in the familiar JP McManus silks, Sutton Place came under pressure before three out and looked in a bit of trouble.

He gradually got on terms with the leaders but was still a length-and-a-half down on his stable mate De Plotting Shed after the final flight.

With 150 yards to go, Sutton Place forged ahead and kept on nicely to take the two mile and a half contest by just under four lengths.

Gordon Elliot’s charge impressed on his return to action last month when running out a seven-length winner of the Grade 3 Limestone Lad Hurdle at Naas.

Elliott said: “We were riding him maybe a little negatively with the trip. Barry said he’s a horse that you’d be better off grabbing a hold of and riding a race. He was a bit sloppy with his jumping because we wanted him relaxed.

“Chasing will be his game and whatever he does this year will be a bonus.”

A son of Mahler, who won the Queen’s Vase at Royal Ascot for Coolmore, he now secures the third Graded victory of his short career and looks to be one of the most exciting prospects in training.

Chasing will be his game

“He’s big and immature, he’s a lovely big horse and probably a lad that wants a fence really,” said Geraghty.

“I thought for a second turning in I was in trouble but when I asked him for a bit he found a bit.

“It’s very hard to say he’s ready for that [Champion Hurdle] yet. It’s a big difference here to the pace they’ll be going in a Champion Hurdle so it could be a big ask at this stage.”

It was later confirmed that Sutton Place would not be supplemented for the Stan James Champion Hurdle next month and in fact won’t be going to the Festival at all. 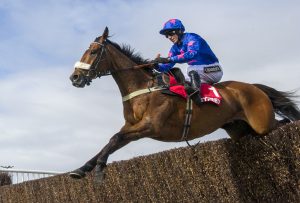 Up Next
Second Ascot Chase for Cue Card