PJA advise jockeys to stay away

More than 30 jockeys and trainers have been hit by fraudsters

The Professional Jockeys Association have warned jockeys to move their accounts away from the high street banks following a string of reported frauds, the first dating back to 2014.

The PJA, in it’s October newsletter published on Tuesday, stated that banks were ‘unwilling and incapable’ of preventing fraud from happening under their current systems.

In October 2014, it was revealed that several jockeys including Rab Havlin, Joe Fanning, Andrew Tinkler and Paul Hanagan had been targeted by an individual acting as an imposter, withdrawing cash from the riders’ accounts.

Royal Ascot winning-rider Havlin received a debit alert on his mobile phone the morning after the money was taken and at the time was surprised they hadn’t take more than the £2,600 that they took.

Earlier that year, a handful of other jockeys with accounts at NatWest and Lloyds Bank fell victim to fraudulent dealings with around £50,000 stolen from jockeys’ accounts.

Part of the newsletter read: “What is most scandalous is that on almost every occasion the banks admit to not following their own procedures, handing significant sums of cash over – in some cases several thousands of pounds – despite signatures that don’t match those held by the bank and/or warning flags on the account not to issue cash withdrawals following previous frauds.

“In the light of the significant and ongoing losses, which must now amount to a significant six-figure sum, the PJA and BHA have come to the conclusion that, given the ineptitude of the major high street banks in preventing the fraud and their lack of interest in prosecuting it, the only way to prevent the frauds from continuing is to move their current account banking off the high street.

“Those that are and chose to remain on the high street, please continue to keep a very close and regular eye on your transactions and report any suspicious activity immediately to your bank.”

Paul Struthers, Chief Executive of the PJA stated that he was at a loss to understand how the fraudsters managed to get the personal details of jockeys and carry out their criminal activities.

He felt that the situation had got to the stage whereby advising jockeys to get their accounts of the High Street was the best and safest option. 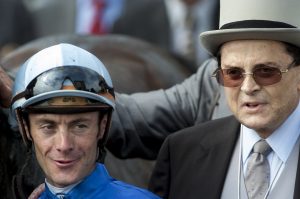 Up Next
Brush with greatness