The big New Year’s Day meeting at Cheltenham may have been lost to waterlogging but a long trip from Somerset to Edinburgh for Musselburgh’s first fixture of the year was worthwhile for the David Pipe team with two of its four runners recording their fifth successive wins.

The smartly-bred Swing Bowler – by Galileo out of the Pipe stable’s former star mare Lady Cricket – remained unbeaten when justifying favouritism to land the valuable Hogmaneigh Handicap Hurdle in the hands of Conor O’Farrell.

Racing for her breeder David Johnson, whose retained jockey Timmy Murphy is currently sidelined with a back injury, the six-year-old mare has now won two bumpers and three hurdle races. She is the fourth foal of the French-bred Lady Cricket, who won 11 races in France and Britain, including the Grade 2 Game Spirit Chase at Newbury and Grade 3 Thomas Pink Gold Cup at Cheltenham. Her first foal, Cricket Boy (by Alflora), gained black type when third in a Listed bumper on New Year’s Day five years ago but never finished better than fourth when tried over hurdles.

Later on the card the German-bred Home Run, an early hurdling winner for his sire Motivator, was the second Pipe runner to gain an impressive fifth win on the bounce when landing the two-mile handicap hurdle under the stable’s conditional Frances Hayes.

In fact, Home Run, who races in colours of the trainer’s father Martin Pipe and whose five recent wins have all come since December 7, has made the most of conditionals’ weight allowances. He was partnered in the first three victories of the quintet by Samuel Welton (twice) and Kieron Edgar, while the gelding will always be fondly remembered by amateur Michael Heard, who rode his first winner under rules on him just two days before Home Run’s most recent victory.

The stable’s first jockey Tom Scudamore brought up a New Year’s Day treble for David Pipe when guiding Buddy Bolero to his second consecutive win in just four starts, this time at Exeter. 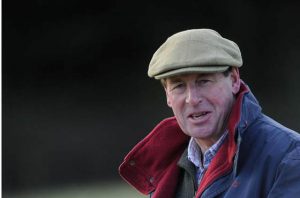 Up Next
The comeback Kim