There’s plenty to celebrate at Mickley Stud, with a Group 1-winning juvenile for Phoenix Reach plus two new stallions

In a Shropshire field stands a well-rugged and muddy-legged sire who could swagger into any of Europe’s hallowed stallion stations and proudly say two words. Not ‘Up yours’, but ‘Elm Park’.

The sire is, of course, Phoenix Reach, who, ahead of the covering season, happily roams a couple of acres at Richard Kent’s Mickley Stud unaware that his juvenile son Elm Park, recent winner of the Group 1 Racing Post Trophy, is now a leading candidate for the breed-defining Epsom Derby.

Not bad for a stallion who stood this year at an advertised fee of £1,500 and covered just nine mares. It would be fair to say the 14-year-old’s fee was negotiable in the spring, and Kent admits: “We would have covered a mare for a load of straw.” Times have changed, and he will stand at a fee of £5,000 next season.

On the one hand it is a totally improbable story; on the other it is confirmation of the mysteries of breeding. It reminds us a top-class racehorse can produce similar offspring, and gives hope to all stallion masters that their boy cracks the code.

Kent, a man of Cork but a resident of Britain for 23 years, is one of those hard-grafting, multi-taskers who deserves luck, although he takes no credit for Elm Park’s conception.

It was planned by Emma Balding, whose son Andrew trained Phoenix Reach to win Group 1 races on three continents. In 2007 the horse’s owner, Andrew Christou of Winterbeck Manor Stud, retired him to the National Stud and it was his covering of Lady Emma’s mare Lady Brora in 2011, his final season in Newmarket, which resulted in Elm Park.

It is ironic Phoenix Reach left the National Stud – ostensibly to gain access to a pool of jumping mares in and around Mickley – when his best foal was about to enter the world, but that is not uncommon in the annals of stallion movements.

Reflecting on the sire’s arrival, Kent says: “We had a very nice foal here by Phoenix Reach that really caught my eye – he is now named Phoenix Returns and has recently won and been placed in handicap hurdles.

“The recession was starting to get going and I knew Phoenix Reach wasn’t really hitting the heights in Newmarket – middle-distance winners were going out of fashion – so I suggested to William Huntingdon [Andrew Balding’s uncle and an advisor to Christou] that he might do better coming to a farm in the country and getting more country [jumping] mares. It was decided to give him one more season in Newmarket and the following year the horse came to us.

“He had been a dual-purpose sire and we continued along that route, but a lot of the older owner/breeders who liked middle-distance stallions had gone out of the game. Now, with so much interest from Australia, the middle-distance sire is coming back into fashion, and that’s before you factor in the Dubai Carnival, demand from Qatar and jump racing. There are a lot of options again.

“We were keen to stand Phoenix Reach because he had won three Group 1 races, he is sound and has the most beautiful temperament – you could bring him into the house. With those attributes you can recommend him to any breeder.”

Elm Park’s Group 2 Royal Lodge Stakes win, followed by the Racing Post Trophy success, has changed the racing and bloodstock world’s view of the stallion, and therefore it was not such a surprise when one of his yearling daughters, bred at Winterbeck Manor Stud and a full-sister to a recent juvenile winner, topped the yearling section at DBS’s Autumn Sale with a £70,000 valuation.

Kent says: “The longer you stay in this business the less you know – you could never have forecast this sort of success. After Elm Park won at Doncaster we had lots of jumping people asking us for good packages, but we had to say no. He deserves a fee increase, just to show respect to the horse, and so he will stand for £5,000 [Oct 1] next year.

“The lesson is that you should never turn your back on a horse that wins three Group 1 races. Elm Park put up a special performance in the Racing Post Trophy and skipped away from the opposition. He looked very happy about the job, but that is typical of stock by the sire – they are all happy and have confidence.”

Without the chosen son, Phoenix Reach would have remained under the Flat radar. Yet closer inspection shows other foals from his relatively small crops have performed admirably. At the turf season’s close they had garnered 13 wins from 28 runners at a strike- rate of 46%, and included Whiplash Willie, second in the Group 2 Doncaster Cup and a close fourth in two Group 1 staying races, Rawaki, a conditions race winner and Listed- placed, and Chesil Beach, who ended the season with four straight wins. The latter pair were bred by Emma Balding and run in the colours of Kingsclere Racing, which owned Elm Park outright until selling an equal share to Sheikh Fahad.

Kent says: “Realistically we hope Phoenix Reach can cover 40 mares next season. I’ll be very disappointed if people who appreciate racing and racehorses don’t use him.”

Kent’s work involves Flat and jumping sires, mares and foals, pinhooking, buying stores and selling them as horses in training, breakers and racehorse ownership.
In fact, just about anything connected with thoroughbreds.

You can sense his pride that son Finn, 19, is now working at Mickley, although he is about to gain further stud experience overseas, while Kent says of daughter Aoife, 17: “We got her to muck out her first stable three weeks ago, so that’s a start.”

Two other children, Fraser and Nell, are too young to help their dad, and when asked if they are into pony racing, Kent says: “No – all my family were bred to stay close to the ground.”

The shortage of quality jumping mares in Britain has led to changes in Kent’s business, and he says: “We are now trying to produce horses you can market, we can’t rely purely on standing jumps stallions. You have to work in the industry, selling here and buying there, and going with the market. We love being involved, so hard work is a pleasure. And I like partnerships because I like talking. You spread the risk and share the fun.”

Elm Park’s Racing Post Trophy win has turned a bloodstock spotlight on his corner of Shropshire, yet Kent could reflect on a good year before that dramatic Doncaster win.
He says: “We used to board Treble Heights, the dam of Brown Panther, before she died, and now keep her three-parts sister Extreme Pleasure, plus another mare for Michael Owen, who we advise on breeding. It was great when Brown Panther won the Irish St Leger. We sold Blazing Speed, who has won two Group 1s in Hong Kong, and we’ve bred 70-odd winners during 2014.

“It was also a marvellous day when Ballynagour won the Byrne Group Plate at the Cheltenham Festival. He was bought for Allan Stennett from Kevin Ross and was pre-trained at Mickley Stud before joining David Pipe.”

Reliable Overbury had to be put down earlier this year, but new blood has arrived at Mickley Stud.

In Phoenix Reach (Alhaarth) and Multiplex (Danehill) the farm has two horses capable of getting winners under both codes, Captain Gerrard (Oasis Dream), whose oldest crop are three, is steadily compiling winners here and in Australia, while Yorgunnabelucky and Heeraat are about to stand their first season at Mickley.

Roger Brookhouse’s Yorgunnabelucky (Giant’s Causeway), whose oldest crop are foals, is a full-brother to Shamardal. He arrived recently after two seasons at Throckmorton Court Stud, while Heeraat (Dark Angel), a Group 3-winning sprinter, was retired from racing by Sheikh Hamdan this summer.

Kent says: “Multiplex has been here eight seasons and will be with us for life. He has sired the winners of 110 races, and this year has had six two-year-old winners over five and six furlongs, three point-to-point winners, and bumper and hurdle winners. He is an all-rounder whose pedigree is a mix of speed and stamina. For a working farm which is trying to produce sound horses we can sell, he has been ideal.

“Captain Gerrard was bought in partnership with Australian interests and recently did his fifth shuttle season in a row, so he is paying his way and has had the winners of 58 races.

“Yorgunnabelucky is an ideal horse to improve the bloodlines of a jumping mare and, while we would take a Flat mare, his future lies with some of the bigger National Hunt breeders.

“Heeraat is standing in partnership with Shadwell, the first time we have entered such an agreement with them. Being by Dark Angel, a lot of commercial stallion masters were trying to get him, but I had been following his career since Liam Cashman pinhooked him as a foal. I’d idolised Liam from when I was a lad, and Heeraat was his sire’s most expensive first-crop foal. He was sound and tough, and from a fantastic line out of a Green Desert mare.

“The first man to book two nominations to him was Paul McCartan, the breeder of Tiggy Wiggy, which gave us a confidence boost.” 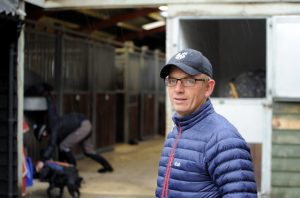 Up Next
Onwards and uplands