General Manager to step down after 27 years

Juddmonte’s General Manager Philip Mitchell has announced that he is to retire from his role later this year.

Mitchell, 68, who is also a member of the TBA Board, has worked for Prince Khalid Abdullah’s operation at Banstead Manor Stud in Newmarket for 27 years and will spend the next six months working with the Juddmonte team to ensure a smooth transition. His successor has not been announced.

“I could not have worked for a more knowledgeable or fairer person than Prince Khalid to whom I am indebted,” said Mitchell.

“I am so very proud of what we have achieved here. I am confident that Juddmonte will continue to thrive going forward and will be working with the team to ensure the continued success of this great organization.”

Douglas Erskine Crum, CEO of the Juddmonte Group, paid tribute to his colleague, saying: “Philip is not departing for six months, but it is not too early to say, on behalf of everyone connected with Juddmonte, a very big thank you to him.

“It is important to recognise his outstanding achievements over the past 27 years, during which time he has been responsible for overseeing the success of Frankel, Kingman, Oasis Dream and many other Juddmonte champions, including the remarkable broodmare band.

“Philip has been at the heart of Juddmonte’s success and established himself at the very top of the worldwide breeding industry. He has guided the operation with professionalism, skill and humour and is rightly widely respected.” 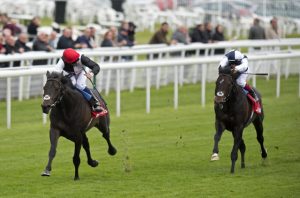 Up Next
Valiant quest