A year on from a season that was severely disrupted by the coronavirus pandemic, the Tattersalls Craven Breeze-Up Sale resumed its traditional role as the curtain raiser for the European sector on Tuesday evening.

It was in June last year when the 2020 renewal was able to be staged and while Covid-19 protocols continue to be the norm at Park Paddocks, this year’s auction had a distinctly more normal feel.

Tuesday’s market proved to be selective with horses hitting or missing with prospective buyers, a trend that was highlighted by some pinhooks failing to make a return on their investment.

Practical Joke filly the star of the show

As the only lot on offer by Ashford Stud resident Practical Joke, Tally-Ho Stud’s filly by the sire drew plenty of admirers and she topped Tuesday’s session when selling to Alex Elliott on behalf of Peter Brant’s White Birch Farm for 360,000gns.

It is a result that further underlines how well Practical Joke’s first crop of two-year-olds have been received, having supplied the $750,000 top lot at the OBS March Sale and a filly who fetched $800,000 at Fasig-Tipton.

A half-sister Futurity Stakes second Rebel Tale, she is out of Purr And Prowl and was purchased for $185,000 from Brookstone Farm at Keeneland November as a foal. She made her way to Ireland after missing engagements in last year’s Keeneland September and Fasig-Tipton Kentucky October Sales.

Plans call for the filly to enter the barn of Chad Brown, who trained Practical Joke to land the Grade 1 prizes the Champagne Stakes, Hopeful Stakes and H. Allen Jerkins Stakes. 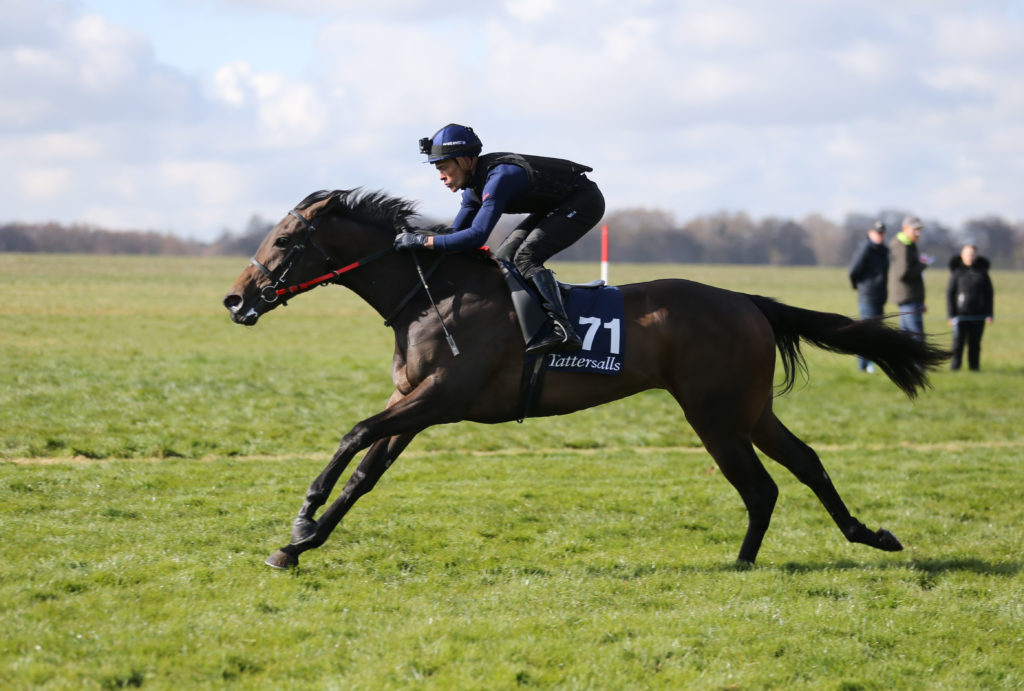 Elliott said: “She’s a beautiful filly and Roger [O’Callaghan] has been high on her for a long time. She’ll head back to the US to go to Chad Brown. She’s a typical Craven horse – scopey with size and quality.

“The two-year-old guys in Florida have been raving about the Practical Jokes all winter. It’s one thing for them to think they’re good but it’s quite another to go and do it, and this horse looks like he’s doing it.

Roger O’Callaghan of Tally-Ho Stud added: “She is as good a filly as I have had to breeze. She has been a genuine natural from the start. I bought her at Keeneland November as a foal with Archie St George [St George Sales at Brookstone Farm]. She didn’t make the yearling sale, and we brought her here. The sire line through Into Mischief is magic.”

Another individual to hit the right notes in the ring was Star Bloodstock’s Night Of Thunder filly who was bought by Matt Coleman on behalf of Peter Swann’s Cool Silk Partnership for 265,000gns.

Swann, Chairman of Scunthorpe United, is no stranger to success from the breeze-ups having bought Norfolk Stakes winner Prince Of Lir for £170,000 at the Goffs UK Breeze-Up in 2018 and Group 1 winner Sands Of Mali from the Tattersalls Ireland Ascot auction for £75,000.

The filly is out of the placed Oasis Dream mare Militate, herself a sister to John of Gaunt Stakes winner Main Aim and a half-sister to the Group 2 winner Weightless. This family traces back to Grade 1 Matriarch Stakes heroine Price Tag.

She had been one of the lots to catch the eye in Monday’s breeze on the Rowley Mile and Swann said: “I thought her breeze was excellent. She’s very strong and she has a real pedigree behind her – if she wins a race, we’re halfway there.

“She’s the sort of breeze-up horse that we look for. I’m not sure who will train her – I haven’t answered my phone yet!

“I think we’ve had 62 breeze-up winners. It works well for us. And with this filly, we’d love to have a go with Ascot and win some of the money back with a bonus.”

It marked an excellent result for Star Bloodstock who had purchased the filly with Byron Rogers at Book 2 of the Tattersalls October Yearling Sale last year.

Robson Aguiar came into the spring with his best draft to date and he was rewarded early on in the session when Roger Varian parted with 240,000gns to secure a Dabirsim filly from his consignment.

The third foal out of the Smart Strike mare Ironique, the filly’s further family includes Poule d’Essai des Poulains hero Falco and Prix Marcel Boussac third Legerete. She had been pinhooked by the Brazilian for €50,000 as a yearling at Arqana.

Varian said: “She breezed well but looked to have plenty left in the tank. She’s got plenty of scope, moves nicely, is mature and looks to have a good mind. She’s for a client in the yard and if she’s ok after this, we’ll look to get on with her. 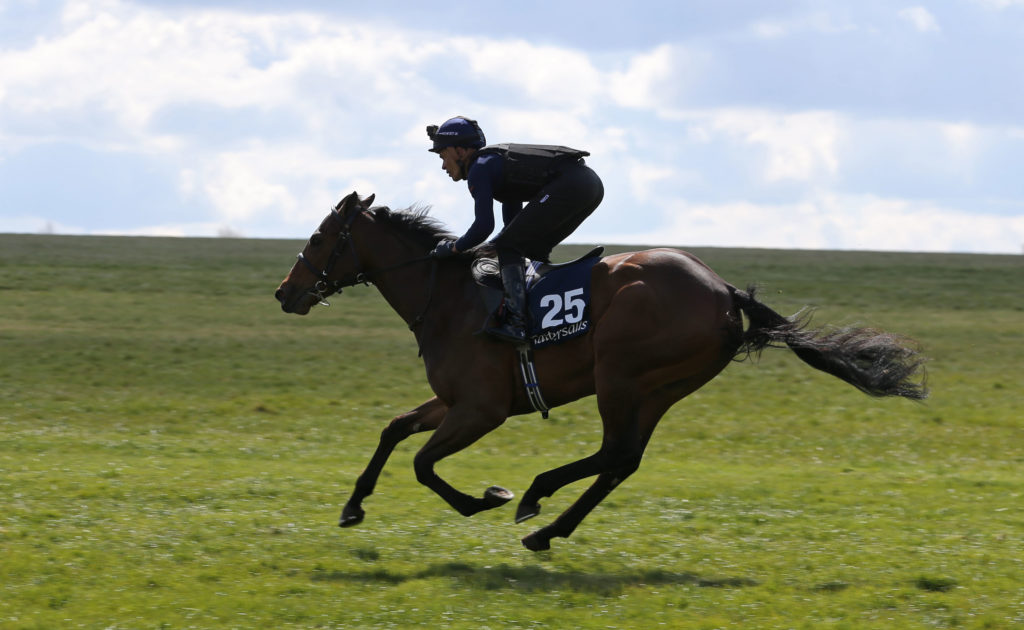 “I hope she has got plenty of scope and is not just a rock and roll bullet. She ticked a lot of the boxes in this sale – she could be a nice one for the bonuses. We’re in a dangerous time as far as prize-money goes and you can’t knock any of the incentives.”

Buyers know what to expect from Aguiar’s stock, a point underlined on the Rowley Mile hours earlier when the George Boughey-trained Forca Brasil obliged in the five-furlong novice stakes sporting the colours of Kia Joorabchian’s Amo Racing.

Clearly impressed with the way in which Aguiar prepares youngsters, Amo Racing were the ones to sign the docket at 150,000gns for a Kodi Bear colt from the family of Nahrain and Benbatl.

Michael Fitzpatrick of Kilminfoyle was another consignor to secure a good result on Tuesday when his Toronado filly whom he had pinhooked for €33,000 through Federico Barberini last year made 210,000gns to Kerri Radcliffe.

The first foal out of the winning Acclamation mare La Undecima, the filly hails from the family of King’s Stand Stakes victor Equiano.

“She is a very racy filly and looks like she could be a Royal Ascot filly and that is what we’re looking for,” said Radcliffe. “She has been purchased for Peter Leidel, who was part-owner of Lady Aurelia.

“Hopefully, she is another Lady Aurelia! She will be trained in England – no decisions have been made yet. Peter has not been back to Royal Ascot since Lady Aurelia, and that was a factor for him.

“We were happy to take home a filly or a colt, but I really liked her, and I think I have a thing for fillies rather than colts. She comes from a good consignor who gets results and that makes a big difference. She is a very nice filly, she behaved well, and she did everything right.”

Matt Coleman was active later in Tuesday’s trade when he acted on behalf of Sheikh Mohammed’s Godolphin to snap up an Oasis Dream colt from the draft of Norman Williamson’s Oak Tree Farm for 210,000gns.

The agent said: “I was on the phone to Anthony Stroud and David Loder, who are not here – they thought he was one of the picks of the sale. He breezed very well; he obviously has a good pedigree. He is a grand looking horse – Norman has done a good job with him.” 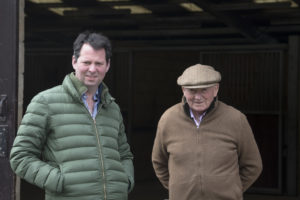