Organisation previously sponsored the race between 1995 and 1998

The Pertemps Network Group was unveiled as the new sponsor of next month’s St Leger by Arena Racing Company on Monday.

The organisation, who previously sponsored the Classic between 1995 and 1998, has signed a one-year deal with the option of continuing the sponsorship from 2021 onwards. This year’s running of the Group 1 at Doncaster will be worth £350,000.

“With the incredibly difficult circumstances that the industry has faced as a whole this year, we are hugely grateful that Pertemps Network Group have been able to once again support Doncaster Racecourse and the St Leger. We very much look forward to working with them this year, and hopefully into the future also.”

“In these unprecedented and extremely challenging times, the hospitality and entertainment industry are facing an overwhelming difficult period and their future remains under threat. It gives us enormous pleasure that we are able to support Doncaster Racecourse and the St Leger in this way.

“We have been fortunate to be a part of some of the greatest races and everyone at Pertemps Network Group looks forward to more history being made.” 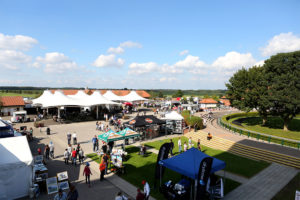 Up Next
Henry Cecil Open Weekend to be held online