Perfect ten for Aidan O’Brien in the Irish 1,000 Guineas

Belle Josephine edges out Joan Of Arc at the Curragh

Trainer Aidan O’Brien captured his tenth Irish 1,000 Guineas on Sunday as Belle Josephine flew home to deny stable companion Joan Of Arc in a tremendous finish to the Group 1 fillies’ Classic at the Curragh.

Run on testing going after persistent rainfall at the track, No Speak Alexander under Shane Foley and Joan Of Arc with Ryan Moore in the saddle set the early fractions and looked like dominating the finish too, as their 12 rivals struggled to land a blow.

Just as Joan Of Arc had mastered No Speak Alexander and looked likely to take the spoils, Seamie Heffernan conjured a terrific late burst from Belle Josephine and in a head-bobbing finish, gained the verdict by a short-head, with No Speak Alexander a length away in third.

It was another superb result for the master of Ballydoyle, owners John Magnier, Michael Tabor and Derrick Smith, and super-stallion Galileo, sire of the first two horses home.

Earlier on the Curragh card, hot favourite Broome was denied his fourth win of the season in the Group 1 Tattersalls Gold Cup (1m2f) as Helvic Dream edged home in the final strides under Colin Keane.

Helvic Dream, a four-year-old gelding trained by Noel Meade, better known for his training exploits over jumps, relished the heavy ground to record his first success at the top level.

Serpentine, wide-margin winner of the 2020 Derby under Emmet McNamara, again failed to show his true form in the ten-furlong contest, finishing seventh of the eight runners under Wayne Lordan, beaten over 17 lengths.

The Group 3 Gallinule Stakes (1m2f) fell to the Johnny Murtagh-trained Earlswood under Ben Coen, one of the rising stars of the Irish weighing room. 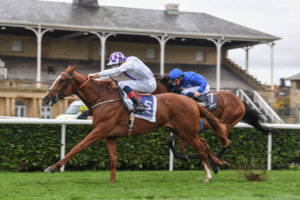