No, not that one, but Darley’s young Australian sire

A study of this weekend’s global stakes results may have a few people scratching their heads at the appearance of the name of Cheltenham Gold Cup winner as the sire of one of the leading juveniles at this early stage of the Australian season.

Denman, a Group 1-winning son of Lonhro, has made an immaculate start to his career as a stallion with his first two runners both winning on debut in Australia on Saturday, including a Listed success for Law at Randwick.

Grapevine got the ball rolling when winning over 1000m (five furlongs) at Doomben in Queensland for trainer Brian Guy. Later in the day it was the turn of Law, who faced the challenge of lining up in a stakes race for his first racecourse appearance in Sydney.

Trained by Gai Waterhouse, the youngster was clearly well prepared for his debut and duly landed the Listed NSW Thoroughbred Breeders’ Plate by half a length under Tim Clark.

While his British-trained and Irish-bred namesake was winning his second Hennessy Gold Cup at Newbury, the Australian Denman was rising to prominence by winning the Group 1 Golden Rose Stakes, along with another three Group races and two Listed races in Sheikh Mohammed’s colours through the 2009/10 season.

He was subsequently exported from Peter Snowden’s Sydney stable to that of Saeed bin Suroor in Newmarket but never raced for Godolphin in Britain.

Out of the Vain mare Peach, Denman shares the same near-black coat of his sire Lonhro and grandsire Octagonal, both of whom raced in the famous cerise colours of his breeder, Woodlands Stud. 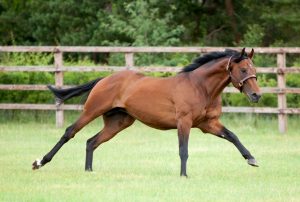