Following the extension to the current Covid restrictions announced by the Irish Government, Part 2 of the Goffs February Sale will now be held as a live online sale on March 11.

The sale has already undergone several alterations, firstly shifting from its traditional February slot to March 2 before moving back again to March 11.

“Whilst this is not our first choice, an online option offers an opportunity to trade and several vendors implored us not to simply cancel the sale,” said Goffs Group Chief Executive Henry Beeby. “We recognise it will not suit some and that buyers would prefer a physical sale, as would we, but we must react and adapt to the latest Government directives. At this stage we simply cannot say with any degree of certainty when we could hold a physical sale that is both safe and compliant in the short term, and vendors need certainty as they plan their year rather than yet more delays”.

Vendors will be asked to upload conformation films and veterinary information to the Goffs website. Every weanling will be presented with a veterinary certificate against while the online information will also provide a farm location should local buyers wish to arrange a socially distanced pre-sale inspection.

Goffs reported that since its inception in July last year, the online platform has received nearly 7,400 bids from 22 countries with over €7.6 million of business successfully concluded. 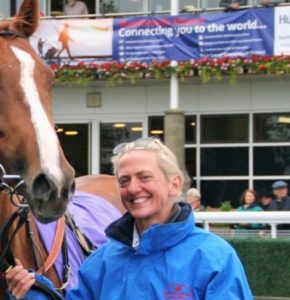 Up Next
Rebecca Edmonds crowned Employee of the Year