A strong renewal of the Goffs UK Breeze-Up Sale concluded on Thursday evening with sons of Twilight Son and Galileo Gold, both consigned by Tally-Ho Stud, topping proceedings at £210,000 apiece.

The first of those to hit that lofty figure was their Twilight Son colt who was snapped up by Michael O’Callaghan.

It was at this sale last year that the trainer had sourced Molecomb Stakes winner Steel Bull for just £28,000 and while he had to pay considerably more for this colt, he will be hoping he’s found another star in the making.

Prepared by Tally-Ho Stud after being bought for just €28,000 at last year’s Goffs February Sale, the colt is out of the winning Exceed And Excel mare My Lucky Liz and is from the family of German Group 1 winner Germany and the Listed-winning pair Go Angellica and Bredenbury.

O’Callaghan said: “I saw him three weeks ago and loved him. He’s by a good stallion and came highly recommended from a great hotel – we’ve done very well buying off them before.

“Then he took in everything well over here. He breezed very well and walked round here like an old handicapper – hopefully that’s the last time he looks like a handicapper!”

Best of luck to @MDOCallaghan with this smashing Twilight Son colt – bought @GoffsUK for £210,000 pic.twitter.com/MR1WHRcCBV

O’Callaghan also went to £140,000 during the session to secure a Footstepsinthesand colt who was offered by Woodtown House Stud.

Out of the placed Harbour Watch mare Serenity Dove, herself a half-sister to the Listed winner Madhya, it was easy to see why O’Callaghan struck for this colt as he shares his sire with I Am Superman.

Previously trained by O’Callaghan in Ireland, the five-year-old switched to the stable of Peter and Paul Snowden last year and was last seen winning the Group 2 Ajax Stakes at Rosehill last month. O’Callaghan still retains an ownership interest in the horse.

Tally-Ho Stud made sure the auction finished with a bang when their colt by first-season sire Galileo Gold went the way of Armando Duarte for £210,000, marking an excellent return on the £25,000 he had been pinhooked for at last year’s Tattersalls Ireland September Yearling Sale.

The colt is a half-brother to Nigel Tinkler’s Listed winner Acklam Express who was last seen finishing a remarkable third on the far-side rail in the Group 1 Al Quoz Sprint in Meydan last month.

Duarte said: “He’s for an English client. We don’t know about the sire yet but the mare has already produced a good horse. We bid on one earlier and didn’t get it, and this horse was the only one after that we were interested in.

“We were looking for an Ascot type of horse and this one looked like he fitted the bill – he looks precocious.”

No Nay Never colt goes the way of Richard Brown

Having caught the eye with his breeze on Doncaster’s Town Moor on Monday, Mocklershill’s No Nay Never colt justified the buzz behind him as he sold for £200,000 to Richard Brown of Blandford Bloodstock.

Bidding had opened at £150,000 for the colt who is the first foal out of the Mastercraftsman mare Habbat Reeh.

While Habbat Reeh was unraced, she is a half-sister to Boomshackerlacker who was trained by George Baker to win five races under Rules including a trio of Listed contests – the Prix Saraca, the Hessen-Pokal and the Prix Jacques de Bremond.

Brown said: “He’s for a new owner who asked me to highlight one colt out of the breeze-ups. He did an excellent breeze. I’m not sure who will train him. This has been a lucky sale for us down the years.”

New sale topper at the Doncaster Breeze Up Sale, Lot 74 – the No Nay Never colt from @Mocklershill1, sells to @BlandfordBldstk for £200,000 @BrzUps pic.twitter.com/xV5u84a53V

Brown’s Blandford Bloodstock colleague Tom Goff was also active during Thursday’s trade and in the early part of the session he went to £150,000 to secure a filly by Tally-Ho Stud’s exciting young sire Mehmas.

It was a fabulous return for Roderic Kavanagh of Glending Stables in Ireland who had utilised the services of Peter and Ross Doyle to pay just £25,000 for the filly at last year’s Goffs Sportsman’s Yearling Sale.

Kavanagh said: “You dream of six figures but that was beyond expectations! She’s been a joy to prep, very straightforward. Obviously, daddy can do no wrong and the Shamardal mare is a big help.

Katie McGivern’s Derryconnor Stud was rewarded handsomely on Thursday when bloodstock agent Oliver St Lawrence parted with £180,000 to secure her Kodiac filly who had recorded the fastest breeze on Tuesday.

McGivern paid the bargain price of £13,000 for the filly at last year’s Tattersalls Ireland September Yearling Sale and the consignor was delighted with the result having suffered a serious fall on the gallops in recent weeks.

She said: “I’d always have a lot of time for a Kodiac filly and the mare is two from two – one is rated 90 and the other is 80 so I thought that there would always be some value there. At £13,000, she was a no brainer.

“The only thing about her is that she was small and she has a bit of white above the knee that takes away a bit from how powerful she is. I don’t usually get horses vetted but I thought I would just in case she was cheap and there was something other than her size stopping her – and she was fine.

“Her homework was good but you just need a bit of luck on the day – they need to run straight and true – and she did a very good breeze.

“I own her outright and this is life changing. We’ve been looking at putting in a straight gallop and so we might do that now.”

Johnny Collins of Brown Island Stables was another consignor smiling after his work walking from barn to barn during Keeneland’s September Sale paid off on three occasions, headed by a Blame colt who was bought by Jono Mills for £175,000.

The colt had been picked up through Chad Schumer for $14,000 as a yearling and is out of a half-brother to Grade 1 scorer to Dance To Bristol.

Mills had earlier signed for a filly by the same sire at £78,000, who Collins had purchased outside the ring in Keeneland for less than the $20,000 she was bought back for.

Earlier in the session, Collins had witnessed his colt by Jimmy Creed go from a $30,000 pinhook to £135,000 two-year-old when bought by Edgar Byrne.

Cowell goes back to familiar source

Five years since selecting future Royal Ascot winner Prince Of Lir from Con Marnane’s Bansha House Stables, trainer Robert Cowell is hoping lightning can strike twice as he secured a colt by Kodiac from the leading consignor for £170,000.

Prince Of Lir was sourced by the Cool Silk Partnership and Stroud Coleman for the same sum before going on to provide connections a reward on their investment as he came home in front in the Norfolk Stakes at Royal Ascot.

Like Prince Of Lir, Thursday’s purchase is by Tally-Ho Stud’s flagship sire Kodiac. The colt is the second foal out of the winning Dream Ahead mare Dream Dana and is related to Group 1-winning sprinter Wizz Kid. 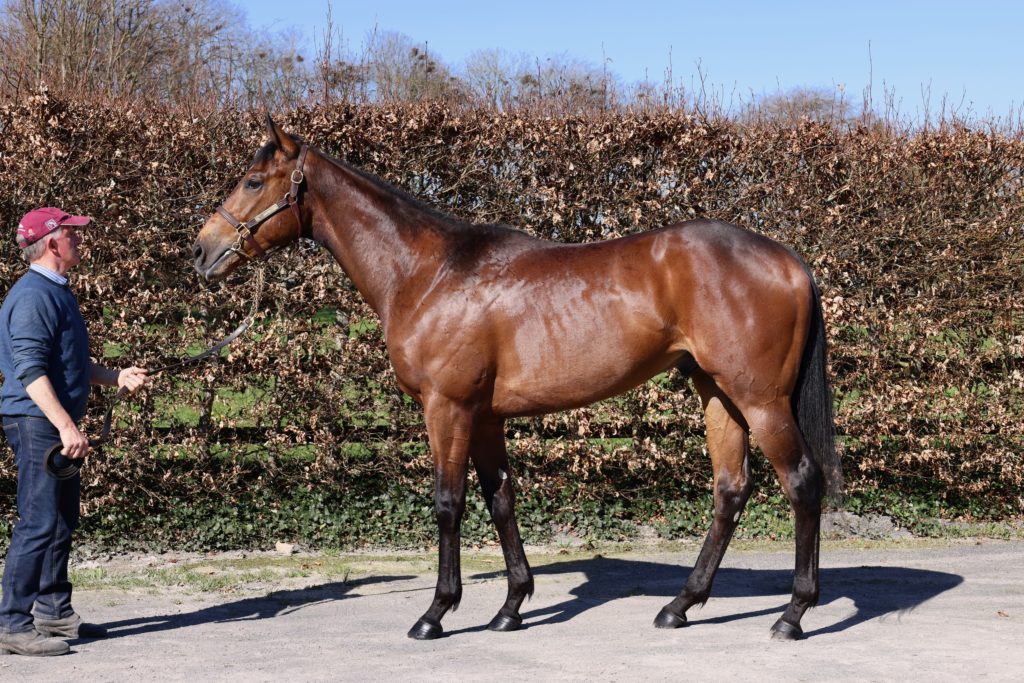 Trainer Robert Cowell is hoping this Kodiac colt from Bansha House Stables will follow in the footsteps of Prince Of Lir – Photot: Goffs UK

He had been pinhooked by Marnane for £46,000 from last year’s Goffs UK Premier Yearling Sale.

Cowell said: “Middleham Park have taken a half share in him with a client at the yard so hopefully that will be a nice partnership with a fun horse – hopefully we can repeat what Prince Of Lir did!

“He’s a lovely model – he’s got a lovely action; good walk and he did a great breeze – and he’s come from the right outfit. So hopefully all the stars have aligned.

“I’d hope he’ll be precocious. Con usually has them pretty fit and if all goes well, perhaps you’ll see him on the track in about three weeks’ time. Ascot is the dream obviously, but he has size and substance so he’s about next year too. There’s a lot to like about him!”

Earlier this week, owners John and Jess Dance revealed they had purchased Manor House Stud in Middleham and are to install James Horton as their private trainer at the birthplace of Dante.

The news came less than a year after the pair had announced a temporary wind down of their operations to step back from racing and revaluate their involvement in the sport.

The operation utilised the internet bidding facility in operation for the Goffs UK Breeze-Up Sale as they added another Kingman to their ranks in the shape of Oak Tree Farm’s colt out of Hasten who cost £140,000.

Manor House Stud also signed at £120,000 for a New Bay colt from the draft of John McCartan’s Gaybrook Lodge Stud, and they paid the same sum for Tally-Ho’s homebred son of Mehmas out of Patience A Plenty.

Goffs UK Managing Director Tim Kent said: “This is an incredible business and today has been an amazing day. To have the ability to hold the sale on its original date and at its intended location was the first success. To then smash all records is something that we couldn’t have envisaged in the lead up to this sale and the results are very positive for the industry and for our loyal vendors who really backed us with some very nice horses.

“This sale has a brilliant record on the track and has produced five Royal Ascot winners since 2016, a fact that was not lost on buyers at any point today. We would like to extend a sincere thank you to everyone who purchased today, and we are sure that we will see many of them at Royal Ascot in eight weeks’ time.

“In 2016, we saw two colts who shared the sale topping price – Prince Of Lir and Ardad – who went on to win the Gr.2 Norfolk Stakes and Listed Windsor Castle Stakes at Royal Ascot that year. We hope that that is a good omen for this sale and we would like to extend a big thank you to our vendors who provided us with a catalogue of real depth to market to our international audience, whilst we would also like to thank Doncaster Racecourse who produced superb ground to show our Breezers to maximum effect.” 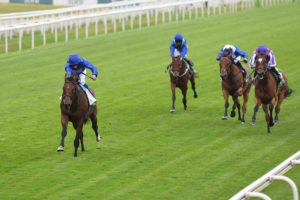