Grand National-winning partnership team up with Midnight Shadow at Cheltenham

It was a victory for the north in the big race on the second day of Cheltenham’s November meeting as Midnight Shadow captured the Grade 3 Paddy Power Gold Cup for the Grand National-winning partnership of jockey Ryan Mania and trainer Sue Smith.

Mania soon had Midnight Shadow, owned by Mrs Aafke Clarke, in a lovely position tracking the leading pair as Coole Cody and Adam Wedge set the fractions in the extended two and a half mile handicap chase.

Despite some scrimmaging coming down the hill, Midnight Shadow moved stylishly into a challenging position approaching the second last fence. Coole Cody, still up for the fight, got in too close to the obstacle and fell, leaving Midnight Shadow with the race at his mercy.

Yet there was still time for plenty more drama as Midnight Shadow pecked after jumping the final fence and then idled on the run-in, giving favourite Protektorat and Harry Skelton half a chance. They closed rapidly near the line but ultimately failed to reel in Midnight Shadow, who scored by three quarters of a length, with Lalor a length and a half away in third.

The winning trainer said: “It’s out of this world, we only had one horse to bring down here and he is a good horse – he’s always been a good horse – so he’s paid us back today. It was terrifying to watch! There aren’t many horses that could have done what he’s done at the last and I just thought ‘that’s it’ – but he just picked himself up and kept going.

“It’s magic. Nowadays it’s nice for us because you don’t often come across a horse like this and he’s a very special horse. I’m probably a bit more emotional because I’m that much older! It is special and it’s special for everyone because we’re only a small yard and the northern yards don’t get to do this very often, so it’s lovely.

“I’ve got 45-50 at the yard but they’re not all Midnight Shadows! These are once-in-a- lifetime horses, the same as [Grand National winner] Auroras Encore and that old boy is stood in a field is looking very well now. Harvey [Smith] bought him at Doncaster Sales and he’s by Midnight Legend and I believe he was bred by Mr Smith-Maxwell, who has the horse ambulance here.

“He’s entered for the King George at Kempton and I’m going to see how he comes out of this first.”

Earlier on the card the Milton Harris-trained Knight Salute landed the Grade 2 JCB Triumph Trial Juvenile Hurdle (2m½f) for the Four Candles Partnership under Paddy Brennan, the rider doubling up in the closing race, the Listed mares’ bumper (2m½f), aboard Bonttay for trainer and joint-owner Fergal O’Brien.

Mike and Eileen Newbould’s Third Time Lucki looked every inch an Arkle Trophy candidate for next year’s Festival with a decisive success in the Grade 2 novices’ chase over two miles, scoring for the trainer-jockey partnership of brothers Dan and Harry Skelton.

JP McManus’s Grade 1-winning chaser Sporting John made a successful return to the smaller obstacles with a ready victory in the Listed three-mile hurdle under Tom O’Brien, riding for his boss Philip Hobbs.

At Lingfield, the William Muir-trained Pyledriver, successful in the Group 1 Coronation Cup at Epsom in June, proved too good for nine rivals in the Listed Churchill Stakes (1m2f) under regular rider Martin Dwyer. 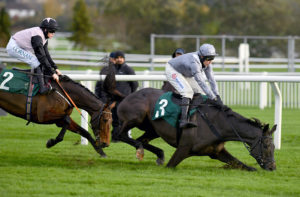