Roger Teal and Cieren Fallon are no strangers to recording notable firsts together and they were at it again on Tuesday as Oxted provided the pair with their maiden Royal Ascot winner as the five-year-old reigned supreme in the Group 1 King’s Stand Stakes.

It was only last year that Teal and Fallon combined with Oxted to win the Group 1 July Cup, providing both with their first strike at the highest level.

The decision by Teal to drop Oxted back to the minimum distance for the first time since winning the Portland Handicap at Doncaster in September 2019 proved to be a masterstroke.

A race that was run at a relentless fraction saw Battaash unable to stride into the lead as he had done when winning last year’s edition of the race, and jockey Jim Crowley had to settle with following the progress of Maven, Winter Power and Que Amoro.

Battaash was in front with two furlongs left to run only for his effort to falter on what was his first outing of the season while Oxted had been left with space in between horses to make up ground from the back.

Oxted’s stamina kicked in and he sealed the contest in an instant with Fallon celebrating just before the line. Late finishers Arecibo and Extravagant Kid took second and third respectively.

Fallon said: “It’s a dream come true, a Group 1 at Royal Ascot. All credit to Roger, Harry, Sue and the team back home. 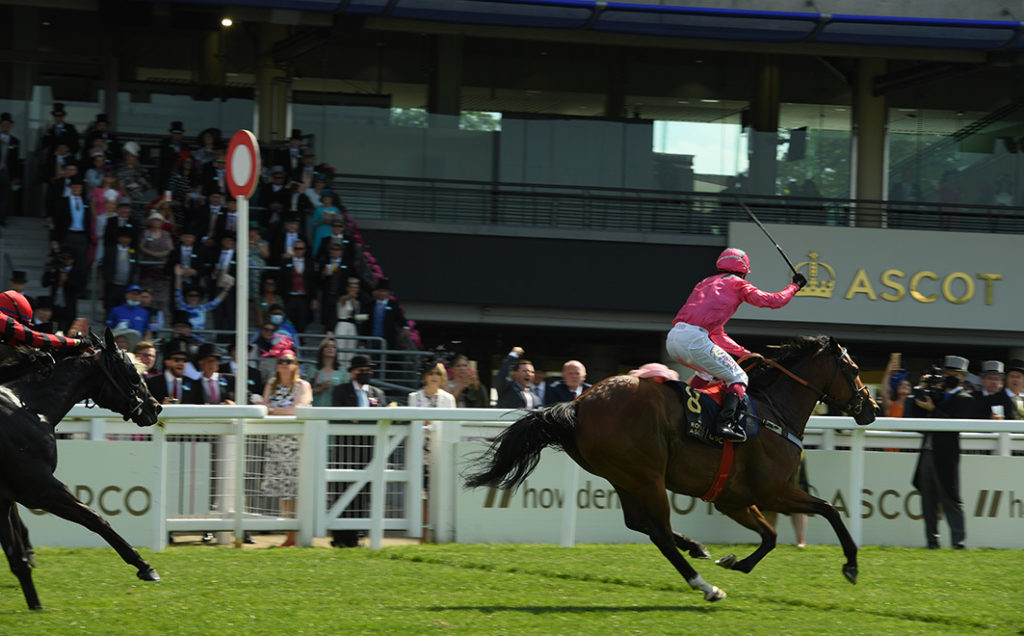 “I got a lovely trip; they went a real solid gallop early on and I didn’t panic. Normally he’s a horse that can be quite keen, but they’ve gone that hard, I’ve just given him his head, let him get into a nice rhythm and just picked them up when I’ve needed to. He’s shown that the July Cup wasn’t a fluke, he’s a proper Group 1 horse.

“It means a lot to me, all my family and my friends. I’ve got so much support around me, my boss Mr Haggas, Sheikh Fahad, I’m just so blessed to have all the people around me to help, motivate and encourage me.”

Teal added: “It’s just unbelievable. I mean I’m speechless because we’ve dreamt about these days for so long, I mean we had it in the July Cup last year, but a Royal Ascot Group 1. I mean, come on! A yard of our size, doing this is amazing.

“Harry’s done all the work with him. It’s just a big family affair. The lads back home are amazing with the hard work they put in. It’s just credit to everyone, and the owners for supporting me. Dreams do come true.

“This is obviously his first run back over five furlongs, so I said to Cieren, just keep it simple. Just go straight from your draw and see how it pans out later on. When we were quite outpaced, I thought oh no, maybe I’ve done the wrong thing.

“But then at halfway I saw Cieren just revving him up a bit and I saw him react, and then it was like poetry in motion. Stamina kicked in then. We knew there was going to be pace, for sure, with the likes of Battaash. But he’s got a great cruising speed; he was a little out of his comfort zone, but he was able to use his stamina.” 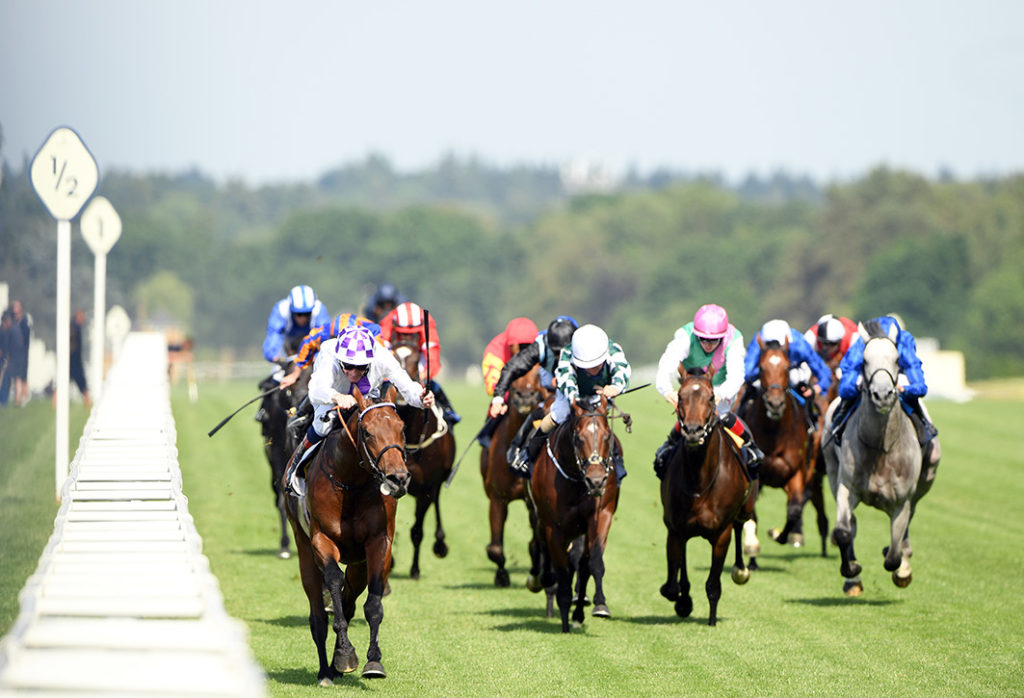 Poetic Flare showed just how tough he is as he produced an impressive performance to win the St James’s Palace Stakes by four and a quarter lengths to add to his victory in the QIPCO 2,000 Guineas last month.

Jim Bolger’s homebred son of Dawn Approach had also finished second behind Mac Swiney in the Irish 2,000 Guineas last time out and had disappointed when finishing down the field in the French 2,000 Guineas.

Those efforts proved not to have left their mark on the three-year-old and winning jockey Kevin Manning said: “The ground is what this horse needs. You want that good, quick ground and that’s what we got today, and he showed how good he is.

“He travelled very well; there was a nice, even pace in the race and always something to aim at. He just travelled so easy into the race, and when I asked him to pick up, he put the race to bed in a matter of strides.

“I couldn’t believe that I was travelling so well and was half sitting down rather than having to go forward. He’s an unbelievable horse. He’s a very tough individual who does himself very well. He has taken his racing very well.”

Frankie Dettori on the mark with Palace Pier

Royal Ascot got off to the perfect start for jockey Frankie Dettori despite having to work hard on Palace Pier before the son of Kingman pulled clear of the field to win the Group 1 Queen Anne Stakes that opened the card.

Dettori could be seen crouched low and pushing Palace Pier as Pogo and Prince Eiji towed the field along with three furlongs to go. Once responding to his jockey’s urgings, Palace Pier moved through the gears swiftly to comfortably beat Lope Y Fernandez by one and a half lengths. Sir Busker was third.

The jockey said: “Wow, wow. What can I say? He has shown again that he is the best miler around. You can rely on Palace Pier. It is like getting one of the proper guys to take the first penalty and they will put it in the back of the net.

“He is one of the best horses in the world and everything went right. Thirty-one years ago I rode my first Royal Ascot winner on Markofdistinction in the Queen Anne. A lot of water has gone under the bridge since then.

“Palace Pier is the best miler in the world. He goes on any ground, he is very kind, does what you ask him to do. He comes from behind, can be up there and he is a great partner to have in these races. It’s not just me, he should take the credit.” 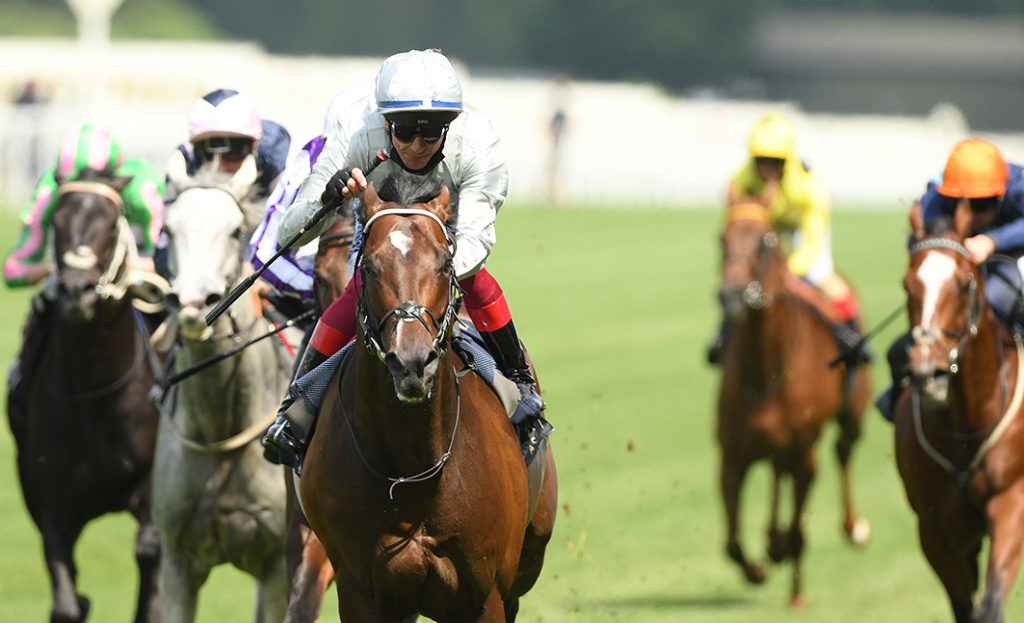 The success followed the colt’s victory in the St James’s Palace Stakes last year and it secured a first Royal Ascot winner for the training partnership of John and Thady Gosden.

John added: “It was a slowly run race over a straight mile and he’s a very relaxed horse – you saw how he cantered down, he hack cantered down.

“I think we were very aware that there was no pace in the race. We suspected a slow pace, which is what we got – a slow pace and a slow time – but then, don’t sit out the back when they kick, with two and a half, three to run.

“He has done it really smoothly; he has come through, won his race, and is exactly like his father [Kingman], as soon as he gets there, he has done enough. And if I worked him at home with a very ordinary horse, he’d just stay with them – that’s his game.

“If you are odds-on like that, it would be a bit odd if you weren’t nervous, because your only thing round the corner is a banana skin, so it can happen. He had a normal blow afterwards – he has done more in his work at home than he did today. I’ve been second in this race three times – it took Thady to get me over the line!”

There was a double on the day for John and Thady Gosden as Amtiyaz, partnered by Hollie Doyle, held off a slew of onrushing horses to capture the Copper Horse Stakes that closed Tuesday’s card.

The stand’s side draw proved advantageous for Berkshire Shadow as the Andrew Balding-trained two-year-old flew home under the drive of jockey Oisin Murphy to win the Group 2 Coventry Stakes.

Much of the build-up had focussed on Wesley Ward’s filly Kaufymaker but as her challenged dropped away, a host of horses looked left to be in with a chance including Ebro River, Eldrickjones and Vintage Clarets.

All the while, Berkshire Shadow was closely following Vintage Clarets and once switched to the stand’s side rail, he soon hit the front in the final furlong to win by one and a quarter lengths. Eldrickjones was second with a further neck back to Vintage Clarets in third.

Winning owner Paul Spickett said: “I am feeling ecstatic! This is a childhood dream come true. I can’t thank everyone enough – it’s been a magical day and I wouldn’t miss it for the world.

A brilliant performance from Berkshire Shadow!

Watch the moment he forges away to land the Group 2 Coventry Stakes for @oismurphy and @AndrewBalding2 pic.twitter.com/4KzFcVYzR7

“We haven’t owned horses for very long – this is our seventh year – so we started off with Berkshire Beauty and Berkshire Honey, whom I still own as mares. I’ve just got a passion for it, big time.

“I had a very good mentor in Andrew’s mother [Lady Emma Balding] who told me in no uncertain terms, do not spend a lot of money. I took that on board from Emma and we started off. I should have come back with one, but I got two, to my wife’s horror.

“But the good thing about today is that this horse was bought for my wife. She loves greys and wanted to get back into racing after two years. It couldn’t be a better day. Back home we have all the family, the work guys, Charles – my unofficial racing manager – my dad, and thank you to everyone at Kingsclere; they’ve been amazing.

“The pre-race vibes were we’re going to win! But there were a lot of good horses. We wanted to run again after Newbury, but we couldn’t, and Andrew said let’s go straight to Ascot. Win or lose, and we won. It’s very special.”

Reshoun wins at a big price

Trainer Ian Williams landed the 2m4f Ascot Stakes as Reshoun held off the late challenge of M C Muldoon to win at odds of 66-1 while the Listed Wolferton Stakes went the way of the Kevin Ryan-trained Juan Elcano. 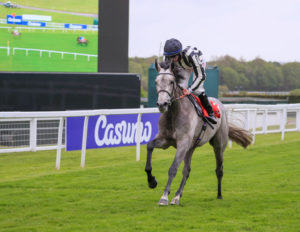