A racehorse owner has devised a bespoke pre-training system to help prevent injury to his runners when they move into full training.

Mehmet Kurt, whose silks have been carried to success in two Turkish Derbys, developed a prototype on his farm in Southern Turkey, where over 1,000 thoroughbreds were trialled on the system.

The chosen site for the ‘Kurtsystem’ is adjacent to Kingwood Stud in Lambourn, which is owned by Mr Kurt and used to be the former training residence of the late John Hills.

Kurt preferred this location over Newmarket owing to his love of the valley and its proximity to Heathrow Airport.

“This is all about one man’s desire to actually improve the welfare of the horse. This is not about training the next Cheveley Park winner, this is more about making sure they’re ready for when they enter training and a proper regime.”

Essentially a monorail in design, each horse is harnessed into cabins – there are ten in total – allowing each to work at varying speeds from trot to canter. There is a veterinary cabin at the back of the vehicle, which can be used to assess each horse individually, checking their heart rate and blood pressure among other indicators.

The inspiration for the project came many decades ago, when an expensive foal acquired by Mr Kurt broke down.

Kurt said: “You spend millions on horses and then they are injured by a couple of riders who don’t know much about them; all you can do is sit there and watch it happen.

“The training starts before the structure of bone and muscle is complete. When the foal that I loved got injured, I said to myself either I’m going to solve this problem or I’m going to leave this [sport] for good.”

Construction of the Kurtsystem is into its final stages and is on schedule to be deployed by the start of the British Flat season.

Throughout the process, the Royal Veterinary College has been heavily involved, visiting the site regularly to advise on the build.

Kurt hopes that Lambourn-based trainers, some of which were invited to view the prototype, will want to use his facility this year. 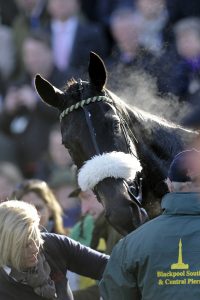