Aidan O’Brien broke the half century mark of Royal Ascot winners with Even Song in the Ribblesdale Stakes and quickly made it 51 when Order Of St George justified favouritism in the Gold Cup, named this year in honour of the Queen’s 90th birthday.

For those who had doubts about the four-year-old beforehand, the question on most people’s lips was whether his stamina would last out the extra six furlongs. Although hardly a straightforward victory, he delivered in fabulous style.

In what turned out to be a stop-start pace, last year’s Prix du Cadran winner Mille Et Mille stretched out the field from halfway making it a gruelling test in the conditions. Ryan Moore found himself being shuffled back aboard Order Of St George and was short of room as the field bunched on the turn for home.

With the likes of Max Dynamite suffering bad interference around him, the colt was switched to the outside by the three-time champion jockey and reeled in the leaders to score by an impressive three lengths.

The son of Galileo has thrived since tackling staying trips and really caught the attention of the racing fraternity when demolishing last year’s Irish St Leger field at the Curragh.

For Moore, who took last year’s meeting by storm with nine winners, this Group 1 victory brought his tally up to three for the week.

“It was a nightmare the whole way, but he’s a class horse and class horses win races,” reflected Moore. “He picked up very well and at the end of two and a half miles, to still be pouring it on is a very good performance.”

It was a nightmare the whole way, but he’s a class horse and class horses win races

The Coolmore operation, which primes its horses to peak at the Royal meeting year on year, have now taken the Gold Cup on a record seven occasions. Order Of St George’s success follows on from Leading Light two years ago, Fame And Glory in 2011 and Yeats, successful four times between 2006 and 2009.

O’Brien said: “He only had one run this year. It’s a tough race, it’s a long way two and a half miles and it was a little bit messy and a little bit rough back there.

“Because he had never run the trip, Ryan had to put him asleep and it was marvellous.”

Day three of Royal Ascot began with the Group 2 Norfolk Stakes and triumph for sprint maestro Robert Cowell with Kodiac colt Prince Of Lir. The breeze-up purchase, owned by The Cool Silk Partnership, came with a steady run to oust the same rival he beat first time out at Beverley, The Last Lion, by half a length. It was a landmark first success at the Royal meeting for champion all-weather rider Luke Morris.

Godolphin hit the target for the fourth time this week when their three-year-old colt Hawkbill, trained by Charlie Appleby, made it five wins in a row in the Group 3 Tercentenary Stakes, beating another Godolphin runner in Prize Money.

In the penultimate event, the ultra-competitive Britannia Handicap for three-year-olds, the well-fancied Defrocked held on in a close finish for Jamie Spencer, despite drifting across the track inside the final furlong. The winner, owned by Michael Buckley and trained by Jamie Osborne, had just a short-head to spare over Abe Lincoln, the winning margin giving no indication of his superiority.

Rounding off Ladies’ Day was the King George V Handicap and yet another debut Royal Ascot win, this time for the combination of jockey William Twiston-Davies and top jumps trainer Alan King, who has excelled with his Flat runners in recent years.

Their three-year-old charge Primitivo looked to relish the step up to 1m4f and won convincingly despite drifting across the course, a common trait of the week. In a sad footnote the Queen’s Guy Fawkes suffered a fatal injury in the contest. 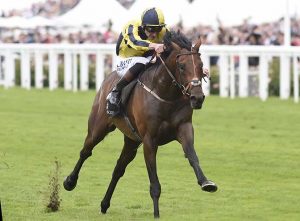 Up Next
Boat sinks Japan's star