Britain might be paralysed by Covid-19 but for thoroughbred studs up and down the country,life goes on. The care of livestock does not bend to restrictions; it is seven days a week and for many people a way of life, not a job.

In response to the UK lockdown brought into force by the government on March 23, which required all but essential workers to stay at home and the closure of non-grocery shops and public spaces, the TBA released a set of protocols for breeders that allowed for the continuation of the necessary travel and activities for thoroughbred breeding operations.

“Through full and strict adherence to the protocols,” the TBA wrote, “the British thoroughbred breeding industry is able to demonstrate it can responsibly comply with the current government advice.”

In it, the TBA stressed the importance of hygiene and social distancing. Guidelines for walking in mares for covering and transporting stock were also set.

The vast majority of stallion studs in Britain and Ireland have remained open throughout the spring for covering bar the odd example, none of which shut their doors for an extended period of time.

In the case of the National Stud in Newmarket, the current situation has actually contributed to an increase in demand for their services. The National Stud was already preparing itself for a busier season prior to the outbreak thanks to the arrival of two new stallions in Advertise, last year’s Commonwealth Cup and Prix du Maurice de Gheest winner, and Irish St Leger winner Flag Of Honour to complement their other young residents Aclaim, Rajasinghe and Time Test.

“Last year we were up about 33% in boarding numbers and right now we’re up on that again,” says Stud Director Tim Lane. “We’re almost at full capacity.

“We’re certainly covering more mares this year. But I also think some of it comes down to the fact that a few of the vets around the country might not be doing so much outside vet work.

“Our spelling side is also up. We started to get a few more come in from the trainers when the government made the lockdown announcement – it’s understandable that owners and trainers are wanting to spell more horses with all the uncertainty around everything at the moment.”

On the other side of Newmarket, David and Patricia Thompson’s Cheveley Park Stud is in the midst of another busy foaling season as their team manages the books of their resident public stallions Pivotal, Ulysses, Twilight Son and Mayson. 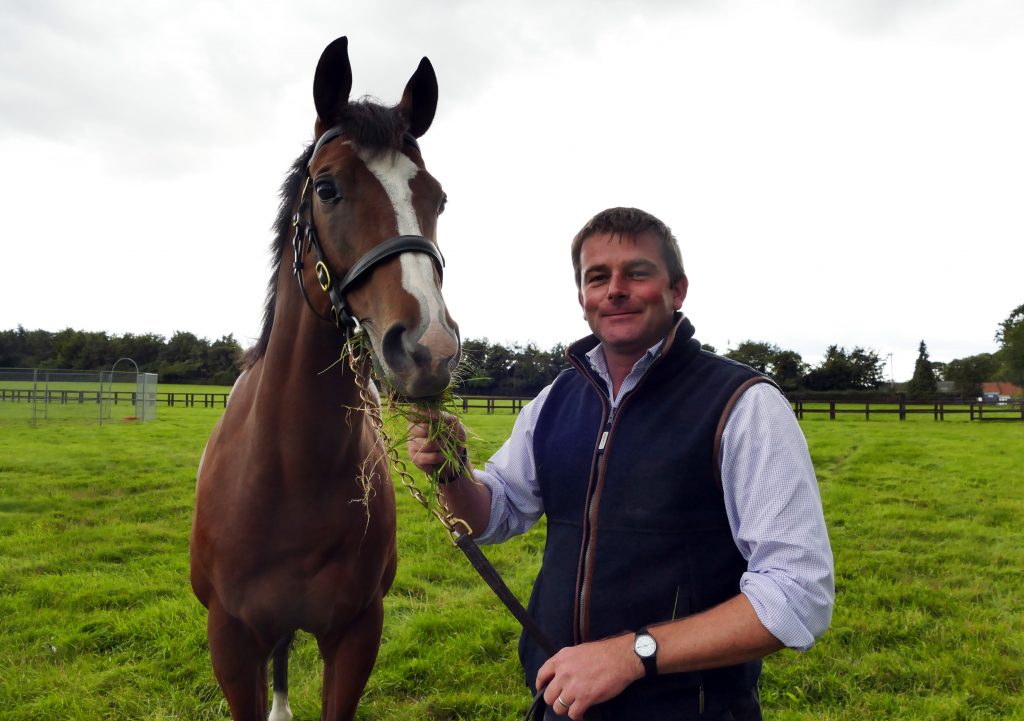 Tim Lane: National Stud director reports an increase in demand for their

“It’s business as normal although obviously we’ve been following all the TBA recommendations and protocols to the letter,” says Chris Richardson, Managing Director of Cheveley Park Stud. “We must pay credit to the TBA in all this; they’ve done a fantastic job.

“We have 150 mares on the place and we’re fortunate that our regular vet is able to attend on a daily basis. Eighty-one of our mares have foaled and now we’re waiting on another nine – I have to say I’m glad it’s not the other way around!

“We’re obviously lucky that we have our own stallions that we can use. But we do like to support outside stallions as well. Fortunately, the majority of those mares down to go to stallions in either Ireland or France foaled earlier on and have come back.

“Now if we can get to May 1 and we’re still covering, then I think we’ve done very well. It will certainly help us save the crop of 2021.”

Vet work is obviously key to the smooth running of any stud and in that respect, Ed Harper, Stud Director of Whitsbury Manor Stud in Hampshire, was quick to pay tribute to the role played by their resident vet Charlie Pinkham. With four stallions on its books, namely Showcasing, Havana Grey, Due Diligence and Adaay, and a large broodmare band, the stud is coming to the end of a typically busy spring.

“We’re lucky in that we have Charlie Pinkham on site,” says Harper. “Since the lockdown, he’s been working at Whitsbury only – Charlie has been important in our growth and now our continuation during lockdown, and we’re lucky in that we can give him enough business while the other vets at Pinkham Equine do outside work.

“Our stud secretary Carole Steele has also done a great job of keeping the show on the road – she’s basically isolating in the office.”

TBA protocols stipulate that all “associated paperwork must be completed and sent electronically in advance”, and that the unloading and re-loading of the horse at its destination “must be conducted by the staff at the destination”, removing the need for contact between any staff.

“We leave the foals on the box, take the mare and we’re lucky in that the four stallions we have are quick coverers in the shed,” says Harper.

“It’s working well in that regard. Obviously with this being a global pandemic, it’s on the news every second of the day, so everyone is on board.” 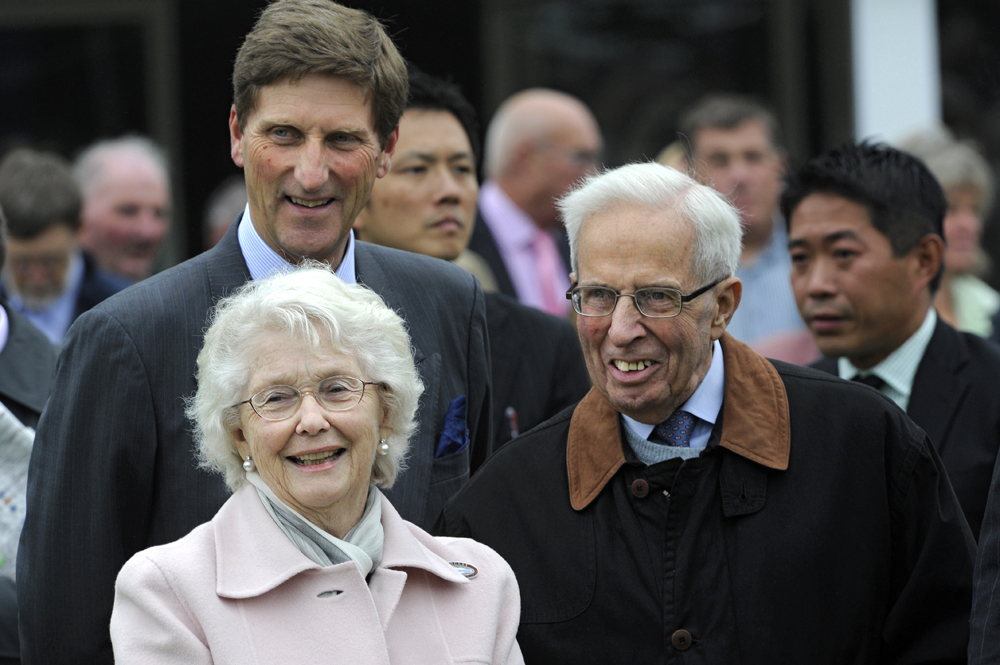 Patricia and David Thompson with Chris Richardson (back left)

Similarly at Cheveley Park Stud, working through the breeding season in accordance with the current guidelines has also been a smooth process.

“We take the mares and foals off the box ourselves and load them back up ourselves,” he says. “Obviously the most important thing is to place people at minimal risk. I have to say that the staff have been fantastic, they’ve all rallied round and are adhering to the recommendations.

“We have 24 staff houses split across the studs and that’s also been a huge help. And the office is being run on a part-time basis – there is one person in at a time.”

With the majority of nominations signed by breeders prior to the coronavirus outbreak, the fallout of the pandemic sadly won’t be fully felt by the British stallion industry until later in the year and beyond. “So far we have only lost a handful of mares from our stallions,” says Harper. “Showcasing lost a few coming in from France, which is understandable.”

However, the ramifications of no racing in Britain or Ireland is already being felt by those stallion masters behind a horse with its first runners. We all know examples of young stallions who gained an extra clutch of mares off the back early spring two-year-old success; those sharp types will get their chance when racing resumes but the likelihood is that they will now have to compete against the more expensive, summer type of two-year-old.

“We’re all hoping that racing will proceed at some point”

“I remember Showcasing’s first winner arrived in early April that season and then several days later, Cappella Sansevero won easily on his debut at Dundalk,” says Harper. “I think we booked an extra 45 mares that year in May to him off the back of those early winners. And it was not just us who benefitted but the breeders who had supported him, too.”

Both Whitsbury Manor and Cheveley Park Stud currently share that frustration as they await the first runners by their residents Adaay and Twilight Son; Adaay, who stands at Whitsbury Manor Stud in partnership with Shadwell, was an expensive breezer who won the Sandy Lane and Hungerford Stakes at three while Twilight Son developed into a Group 1-winning sprinter and now bids to enhance the legacy of Pivotal and his sire Kyllachy at Cheveley Park Stud.

However, frustrations aside, all things as ever must be kept in perspective. 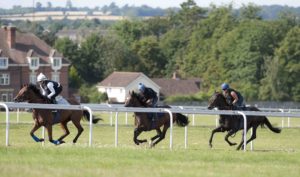 Up Next
Racing plans for resumption on June 1