As home to Classic-producing sire Aclaim and top sprinter Advertise, Manton Park Stallions enters it first season in 2023 with a select but exciting roster of horses

Such is the tough nature of the stallion business that the launch of a new yet sizeable operation has become an increasingly rare event. That is particularly true of the British side of the industry, which is a very different beast to that of 25 years ago when private stallion operations populated the landscape up and down the country.

Which is why Martyn and Amy Meade’s launch of Manton Park Stallions on the storied Manton Estate near Marlborough in Wiltshire should be regarded as such a welcome addition for the 2023 season. The land is steeped in racing history, whether once as the training base of Alec Taylor and his son Alec junior, who sent out 21 British Classic winners during his tenure from 1894 to 1927, or that latterly of fellow Classic-winning trainer Peter Chapple-Hyam. Meade, who trains in partnership with his son Freddie, swapped Newmarket for Manton in late 2017 and today occupies the vast estate with fellow Group 1-winning trainer Brian Meehan and Ollie Sangster, who starts his training career next season.

However, not since the early part of the 20th century, when 22-time winner Bayardo, one of the greatest horses of his era, held court under Alec Taylor’s stewardship has Manton housed a stallion operation.

Thus the arrival of Advertise and Aclaim to Manton Park heralds the dawn of a new era. It is the brainchild of Meade, who trained both Aclaim and Advertise to Group 1 success; Aclaim, the older of the two, won the Prix de la Foret in a career that also included a win in the Challenge Stakes while Advertise hit Group 1 heights as a two-year-old when successful in the Phoenix Stakes prior to sweeping the Commonwealth Cup and Prix Maurice de Gheest at three.

Nor is the Manton Park umbrella confined just to British shores since it also covers the top-class stayer Technician. Trained by Meade to win the Prix Royal-Oak during a productive and progressive three-year-old season, the son of Mastercraftsman stood his first season at Haras de Montaigu in France this season

Both Advertise and Aclaim began their stud careers at the National Stud in Newmarket and successfully so, with Aclaim the sire of 1,000 Guineas winner Cachet and exciting sprinter Royal Aclaim out of his first crop and Advertise represented by yearlings that sold for up to 500,000gns at last month’s Tattersalls October Sale.

However, as Meade outlines, it was always the plan to one day embark upon running their own stallion operation at Manton.

“It was always in the back of our minds to do this,” he explains. “It was one of our rationales to link the racing with a stallion operation and therefore aspire to competing in the higher levels of racing with the idea that stallions and possible broodmares can then be created.

“And we managed to do that fairly early on – we managed to have that Group 1 success with a couple of horses but they came a bit earlier than we thought they might, at a time when we weren’t established enough to be able to stand them ourselves.

“So the natural thought was to send them to the National Stud in Newmarket, which we did, and they’ve done a very good job with them.” 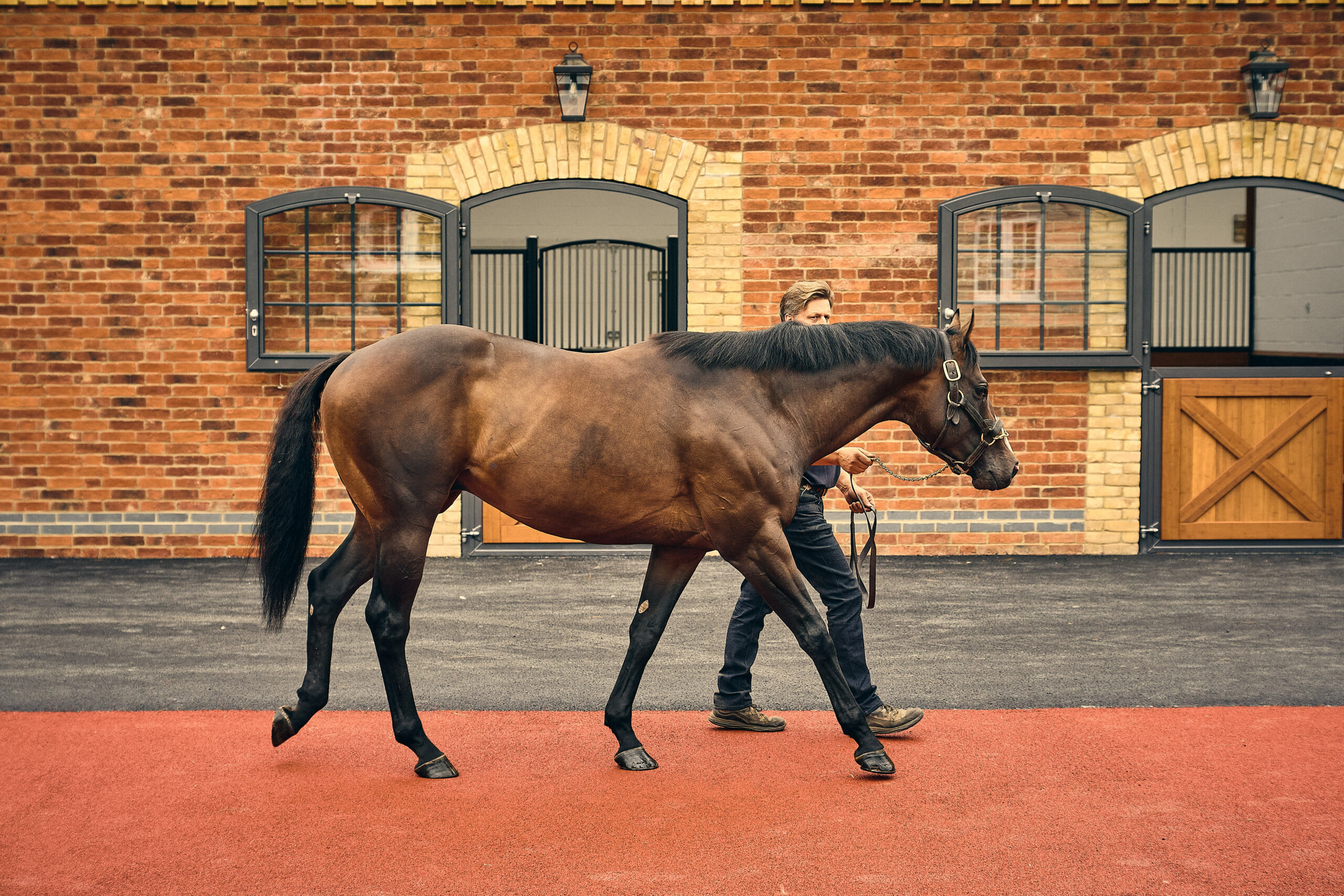 Advertise: first-crop of yearlings were well received at the sales. Photo – Dominic James

Manton Park heads into its initial season with several factors on its side, not least the fact that in Aclaim, it starts out with a young Classic-producing sire on its books. Having sired 27 winners out of his first crop of two-year-olds last season, Aclaim’s progeny progressed as anticipated into this year to the point that he now has six stakes performers on his record. The tough Cachet, whose win in the Nell Gwyn Stakes and second place in the Poule d’Essai des Pouliches sandwiched her front-running 1,000 Guineas victory for George Boughey, is the star of the show. Then there is Royal Aclaim, who quickened away from some good older sprinters to take the City Walls Stakes at York in the manner of a Group 1 horse.

Aclaim heads to Manton following a shuttle season in Australia at Aquis Farm, where he covered a full book of mares that included Group 1-winning sprinter Loving Gaby.

Meanwhile, it is crunch time for Advertise, whose first crop of 114 take to the track next year. But the omens are good, especially in light of the reception given at the sales to his first yearlings. Led by a colt out of Squash sold by Tally-Ho Stud for 500,000gns to agent Richard Knight, eight of his yearlings sold for six figures, and to a wide variety of buyers that also included American agent Ben McElroy, Charlie Hills, Andrew Balding and American-based owners Blue Devil Racing, who plan to send their purchase, a filly out of Treeline bought for €300,000, to Joseph O’Brien.

As for Meade, he will have 11 – a ‘comfortable number’ – under his care next season.

“I think what we have gives us a great leg up to start with,” says Meade. “It’s very difficult when you’re starting out to find the stallions with the quality needed to make a mark. You might get away with a Group 2 or Group 3 winner but I think it’s a huge struggle. And I think if you’re going to do that, then you need a mass of mares either owned by yourself or followers. Otherwise, I think you’ve got to start at that Group 1 level. And then of course you need an awful amount of luck.

“Also I think it helps enormously if you know the horses to start with. If people buying into stallions or making them haven’t had the relationship with them from the start, then you might not quite know what character you’re going to get.

“If you look at Aclaim, he was always a great fighter. The physical make-up of the horse is important but so is character and Aclaim had a will to win – he was not going to let anything get past him. And you think, well is this actually going to transpose to his progeny? I think clearly it has – he gets so many winners at all levels and then look at how tough Cachet is.”

While Aclaim was bred by Meade’s son-in-law Dermot Farrington, an integral part of the Meade team, with Canning Downs, Advertise was purchased by Farrington from his breeder Cheveley Park Stud as a Goffs UK Premier Sale yearling. Out of the Pivotal mare Furbelow, he shares his sire Showcasing with this season’s successful first-crop sire Tasleet. 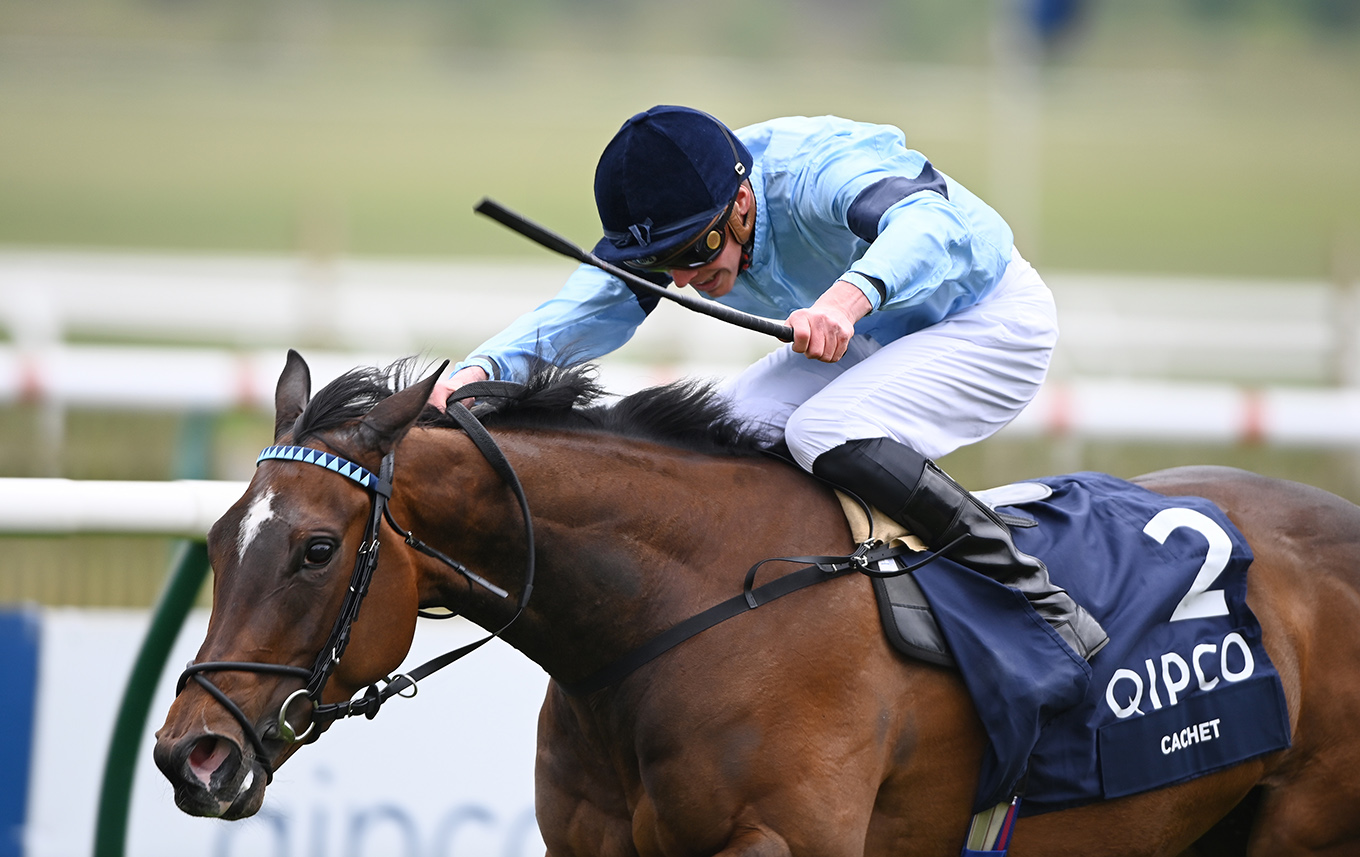 “Advertise is another horse we know very well,” says Meade. “What I’ve been very pleased about this sales season is that you can see he’s stamped his stock. They do seem to be of a type, and that seems to be a plus.

“I’m quite fond of horses with size and substance, and you’ve got that with him, there is something to work with there. And the other great thing about him is that he was so sound in training, he never missed a day. He was an easy, straightforward horse – he just got on with it and stepped up to the plate when needed.

“He rarely ran a bad race and went through all those two-year-old races [in addition to winning the Phoenix Stakes, he was placed in the Coventry and Dewhurst Stakes] before training on at three. It’s very unusual to have a horse who can win Group 1 races in England, Ireland and France. He always lived up to expectations.”

With the launch of a new venture comes the formation of a new team. With Meade at the helm, Richard Wright has been appointed as bloodstock director while Olivia Johnston has assumed the role of bloodstock co-ordinator. Investment has been plentiful with a new stallion yard and covering barn nestled within the estate, surrounded by the rolling paddocks that currently host the outfit’s 12-strong broodmare band and their followers. As befits an elite breeding operation, it is a group where the emphasis is on stakes winners and well-related mares.

“The thing is now we have to perpetuate it,” says Meade. “That’s what we’ve got to try and achieve, to keep on improving the stock.

“As an organisation, we’ve also got to get close to the breeders. It’s easy to look at the top end of the market and the headline lots and think it’s fantastic – that it’s a licence to print money. But of course it’s not. For a lot of breeders, I think it’s a very difficult time.

“We have to have that special relationship with breeders, to understand their particular requirements and then try to be flexible.”

He adds: “We’re a new establishment with a new team but we’re attacking it all with great enthusiasm.” 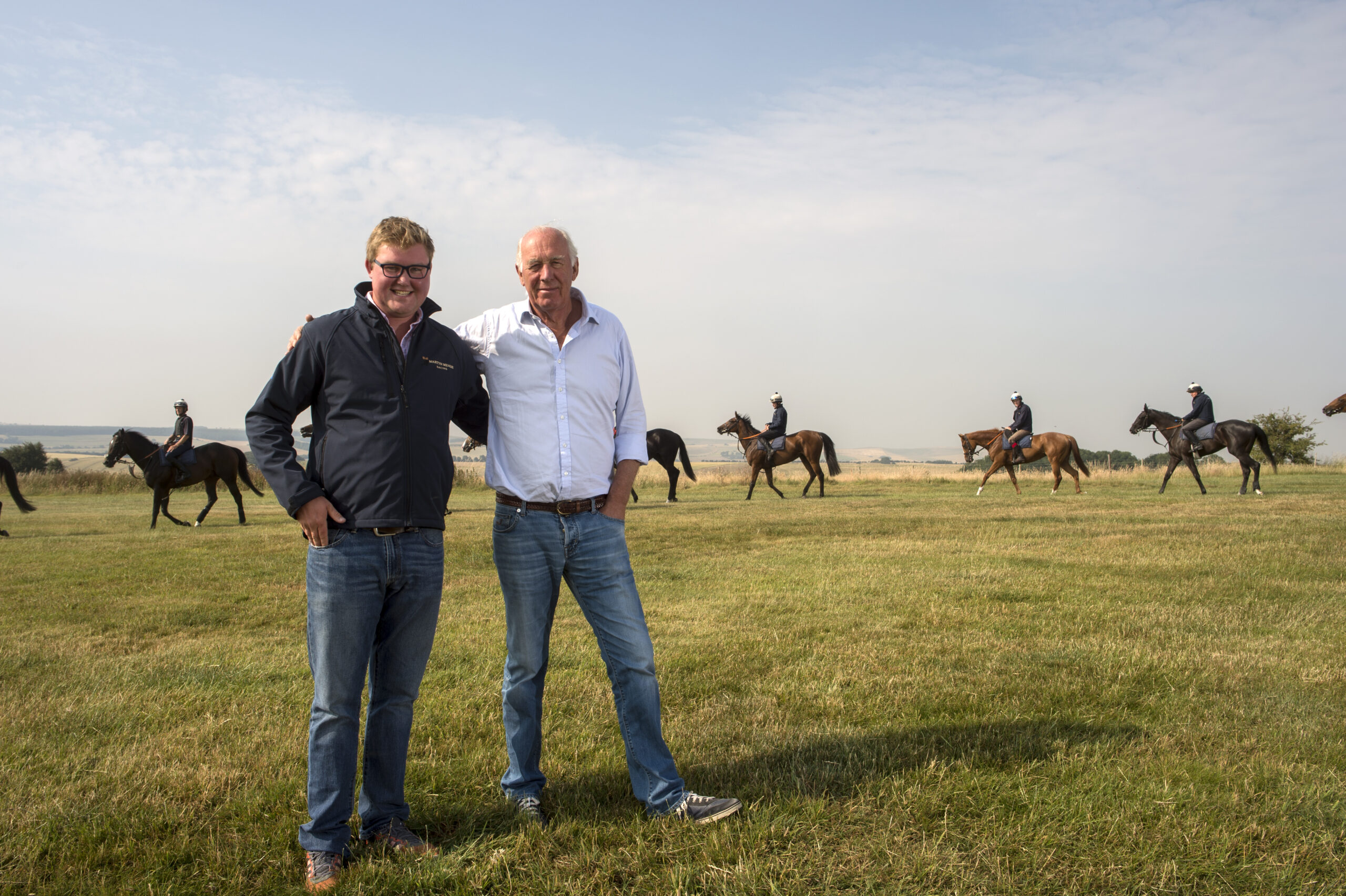 Martyn Meade, pictured with son Freddie: ‘as an organisation, we’ve also got to get close to the breeders’. Photo – George Selwyn 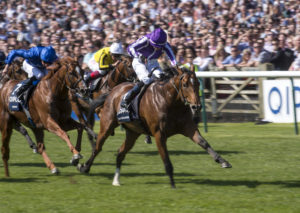