Challenges ahead for yearling season as Orby Sale concludes
Stories

Nestled in the countryside surrounding Banbury in Oxfordshire is a rich seam of land that has played a role in the development of some of racing’s most revered names.

It was at Eydon Hall Farm in the Northamptonshire village of Eydon, 12 miles from Banbury, that Bosra Sham, Markofdistinction, Barathea and Gossamer spent their formative months for renowned breeder Gerald Leigh while on the other side of Banbury lies the village of Kirtlington, home to Kirtlington Stud from where Arthur Budgett bred his two Derby winners Blakeney and Morston.

Charles and Sophie Buckley’s Culworth Grounds Farm, a neighbour to Eydon Hall, is a newer name to the world of British breeding but in the five years that it has been sending yearlings to the sales, it has risen to become a respected participant in its field, one whose reputation has been buoyed by the presence of several memorable pinhooks. With its draft increasing year by year and an established foothold in this competitive industry, it is already doing its bit to maintain that rich neighbourhood tradition.

Culworth Grounds has been in the ownership of the Buckleys for the past 14 years. Previously a farm with an emphasis on cattle and cereals, the 1,000-acre estate has undergone a gradual yet comprehensive programme of development that today sees it host differing facets of rural enterprise while keeping agriculture at its heart.

Included in that are the thoroughbreds, the work and pride of Sophie Buckley. Having started out with three pinhooks five years ago, Buckley and her team will this year head to the sales with 25 yearlings under their wing, four of whom are catalogued to Book 1 of the Tattersalls October Sale in Newmarket. With progeny by the likes of Churchill, Golden Horn and Ulysses to offer, there must be a live chance that Culworth Grounds will surpass its previous auction high of 160,000gns, paid by Shadwell Estate Company at last year’s October Sale for the Cable Bay colt Ertikaaz; remarkably, that colt had been a mere €4,000 pinhook by the farm the previous November.

“That was the moment I thought ‘oh this is what I want to do’. From then on, I intently followed racing”

“A couple of years ago, I decided to take the leap and bought three foals with the help of Matt Coleman and Sam Hoskins – they came in with me on my first ones,” says Buckley. “Of those three, two made a profit and one broke even. So it was a good start and every year since, we’ve bought more foals. At the same time, I’ve started to invest in mares. Right now I have shares in ten of them, some I own fully and others with partners. So now we have 25 yearlings to sell this year.”

Although not born into the industry, Buckley was bitten by the bloodstock bug at an early age.

“I don’t come from a racing background,” she says. “My father is a farmer. But I grew up in County Kildare, and there’s lots of racing everywhere.

“I started from absolute zero, mucking out in dressage and showing yards. But then I did a year in my gap year for Angus Gold and Hubie de Burgh, opening doors at all the sales, and that was the moment I thought ‘oh this is what I want to do’. From then on, I intently followed racing.

“As a hobby, I had shown horses and it’s a very similar concept – you have to buy a horse to fit into a category and produce it nicely to win. So I knew that’s what I wanted to do but wasn’t sure how I was going to make the leap to do it. 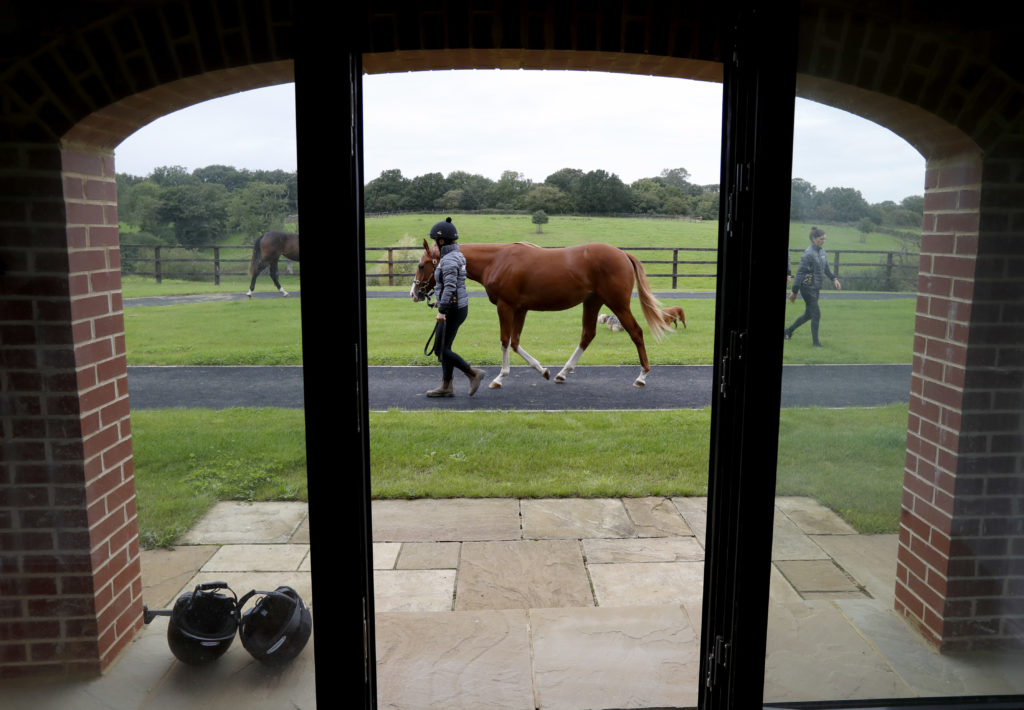 “I went to Edinburgh University and did rural resource management and then I did a MBA Equine at Cirencester. From there I went to Darley to work as a marketing executive for a year – I really enjoyed that but soon realised that if I was to do it properly, I’d have to make some money. So I decided to leave the industry totally, went to London and did some property development with my husband. One went very well and that helped us to buy Culworth Grounds.”

Then a farm with no stables, the Buckleys have now developed the property to the point where it has become self sufficient across various sectors.

“It was just a farm and pretty run down,” says Buckley. “There were no stables. It was totally barren land.

“The stud now works alongside the wider farming business and the farming team do a great job keeping all the paddocks in good shape and providing us with our own forage and bedding. We get electricity from our own solar park, feed from our local mill at Heygates and quarry our own stone for roads. We also make our own haylage and bedding. The farm is a big work in progress but each year we try and develop something new – it’s all part of trying to keep everything as sustainable and efficient as possible.

“I always obviously wanted to do the horses and one of the other diversifications we did was turning the cattle sheds into stables.”

The first group of foals to be pinhooked included a Fast Company colt bought for 36,000gns as a foal who blossomed into a 75,000gns yearling. The following year, a Slade Power filly progressed from a €33,000 foal valuation to that of 110,000gns as a yearling, while in 2018, the farm celebrated the sale of a War Command colt for 100,000gns; now named Kipps, he has developed into a smart handicapper for Hughie Morrison.

Every consignor has their own favoured methods of bringing a yearling to its peak. At Culworth Grounds, the emphasis is on exposing the youngsters to as many different situations as possible and that includes heading out on the estate’s gallop alongside Buckley on her hunter.

“I like my yearlings to do something different every day,” she says. “We’re trying to prepare them for everything and I want them to leave me as confident horses.

“So we try to put them in as many different situations as we can.

“I have a big hunter that I take them out with. It’s something I like doing for many reasons. Firstly, they’re going in a straight line and not just in circles. We’re also getting them out and about and they’re going up a gallop – that’ll be one less thing for them to worry about down the line. We don’t fully break them in but we also put a saddle on them before they go to the sales. 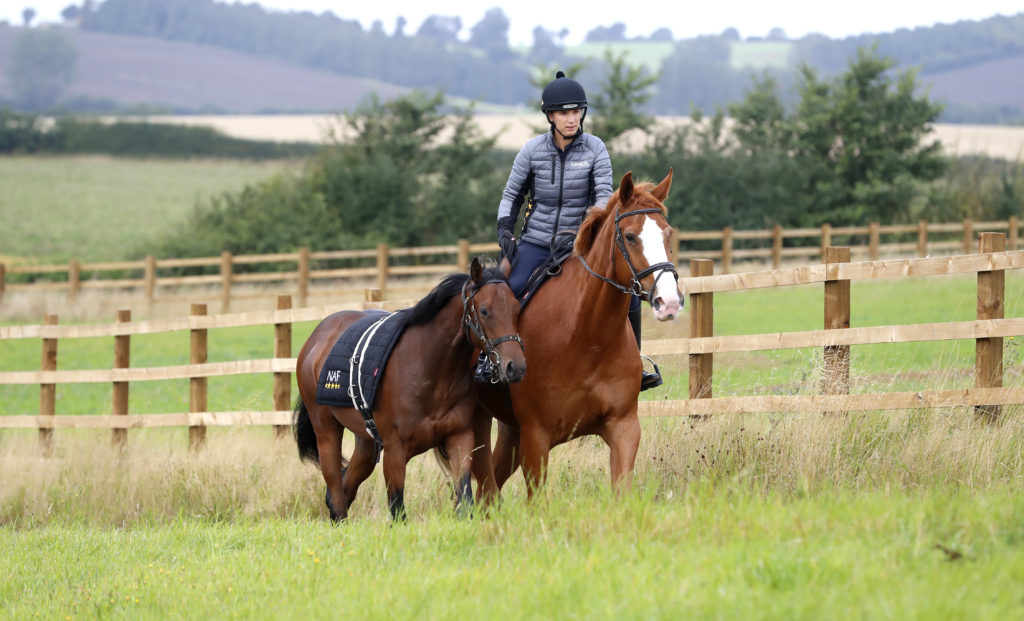 Yearling prep is a varied exercise at Culworth Grounds Farm and includes heading out on the estate with Buckley and her hunter – Photo: Dan Abraham

“It’s about trying to give them all the experiences we can so when someone goes to pre-train them, they’re hopefully civilised and not a lunatic. They’re like children – it’s a bit like sending them off to their first day at school, you hope you’ve put the confidence into them so it’s not going to be a complete nightmare for them.

“Not every horse will be perfect but it’s not all about the money – our aim is to give someone a really good product so that they want to say, ‘yes we’ll go back’.”

“We are working hard on building a great team for the future,” she says. “Essentially, the team is everything for producing the best horses, from the people who work for us directly to our vets, Walnut Hill Equine, and farrier, Sean Wheelan. Kate Leatherbarrow, my stud groom, and Eva Filgate, who is assistant stud groom, are in charge of the horses. Lucy Steel runs the office and marketing.

“NAF are a very important part of the team as well and I work closely with them to ensure all the horses are looking and feeling their best on the inside out.”

This year, Culworth Grounds will take a batch of three yearlings to Book 1 of the Tattersalls October Sale, including a homebred filly from the first crop of Ulysses.

“I’m excited because she is the first homebred that I have had go to Book 1,” says Buckley of the filly out of Last Echo, a Whipper relation to champion two- year-old Priory Belle.

“She’s the second foal of the mare and her first is an Adaay colt, Echo Beach, who was second on his second start recently for Hugo Palmer.”

“I would like to do both, to pinhook and try to breed a nice one. I love the pedigree side of things”

The Ulysses filly is joined in the draft by a pinhooked Profitable filly who is related to the Classic-placed Musis Amica and a Golden Horn half-sister to Listed winner Ifrachy who is out of Group 3 heroine Killachy Loose.

Meanwhile, the Book 2 draft consists of four entries, among them a colt from the first crop of Churchill and a Mastercraftsman colt who is related to top New Zealand sire Tavistock.

Another ten yearlings will go to Book 3 including those by Belardo, Time Test, Postponed and Sir Percy.

“I love what I do,” says Buckley. “But I would like to expand the breeding side because I think the pinhooking is getting very hard, it’s very competitive and the nice foals are very expensive. So I would like to do both, to pinhook and try to breed a nice one. I love the pedigree side of things.”

Culworth Grounds has already dipped its toe into the yearling market at the Tattersalls Ascot Yearling Sale. Although low-key, the sale was well attended by agents and trainers, some of whom were encouragingly happy to buy on spec, and in the case of Culworth Grounds, there was a 100% clearance rate from four offered.

“It could have been a lot worse,” says Buckley, alluding to the early British yearling sales. “It is going to be tricky, there’s no question. It’s a year not to be greedy and to focus on selling. In short, I think if you want to sell your horse, keep it simple and be very realistic.

“I try to be positive. There is going to be value out there. And not everybody will have done badly from Coronavirus – some people will have done well and it’s about finding those people and bringing them in.

“I also think it will make some people do more with their lives, and for some that could mean investing in a racehorse. That could be a positive out of all this, people saying ‘you only live once and let’s just go for it’.” 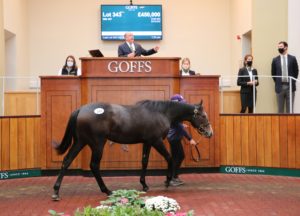 Up Next
Challenges ahead for yearling season as Orby Sale concludes