One man and his dog (and quite a few horses)

The watersplash in the middle of Aldbourne is a new feature courtesy of the recent flooding but by the time Baydon Hill is climbed, up out of the village to the sun-speckled fiefdom of Malcolm Bastard, it’s easy to forget the drudgery of the long, wet winter.

Here, on a bright morning at the end of February, the longest-serving British breeze-up consignor is celebrating his 59th birthday with his own private view of plump Wiltshire hills, one of which serves as a testing six-furlong canter for his young equine protégés, who appear, two by two, in steady procession.

Bastard’s slightly shuffling gait as he beetles about the yard organising the two-year-olds has little to do with his age, one suspects. It is, however, very much in keeping with his determinedly understated manner.

“I’m pretty quiet and boring,” he claims later over coffee and a hot cross bun. This particular brand of negative self-promotion is refreshing in the loudmouth days of social media and has clearly done Bastard no harm in the years between giving up his hair-raising life as a journeyman jump jockey in the late 1980s to concentrate on the then relatively new arena of breeze-up sales. It’s a profession allied to a different type of risk.

“I’ve been around a bit I guess but not as long as Willie [Browne] – he’s outstanding,” says Bastard of his Irish counterpart who is responsible for the successful Mocklershill operation. While Browne has recently started training a few horses alongside breeze-up consigning, Bastard augments his sales commitments with a thriving breaking and pre-training business.

“We’ve been doing the breeze-ups for 26 years now. I was still at the tail-end of my riding career when I started to do a bit of it. I was lucky early on that I did fairly well so I packed in riding as I wasn’t really getting any rides. For 14 years that’s all we did – pinhooking – then people sent a few yearlings to be broken in and that side of the business has built up from there. It helps to pay for the breezers if things go wrong. It’s a pretty tricky job to do on its own.”

The “we” refers to Bastard’s long-term partner Fiona Plummer, who is responsible for the office work connected to the significant number of equine residents and their owners, and also to Jim Guest, a fellow former jump jockey who worked at Fred Winter’s with Bastard and is now very much his right-hand man at Baydon Hill Grange.

“Jim and I have been friends for 40 years and he does all the breaking,” adds Bastard.

The yard’s list of pre-training clients reads like a who’s who of major owner/breeders. George Strawbridge, Lady Rothschild, James and Anita Wigan, Lady Howard de Walden, Anthony Oppenheimer, Lady Bamford, Highclere Thoroughbred Racing, Highclere Stud and the Duke of Roxburghe are all patrons, not to mention the Queen.

“We have some nice horses coming through here,” says Bastard, again the master of understatement.

While the homebreds are being put through their paces prior to going into full training, at the forefront of the operation in these early spring months are the 30-odd breeze-up horses with a more pressing engagement. In a swinging canter, around 16 of them make their way up the deceptively taxing woodchip gallop which weaves around the hill back up towards the yard.

Bastard and Guest are happy with what they see – content-looking horses coping well at this early stage of their careers, their trace-clipped winter coats slowly being surrendered to reveal a promising gleam beneath. Of the 13 youngsters heading to Tattersalls’ Craven Sale in mid-April, a broad-blazed New Approach colt is particularly pleasing his handler, while a substantial son of Raven’s Pass is another to take the eye.

Content for now, the consignor says: “The closer you get to a sale the more difficult it is to sort out any problems but I’m pleased with how things are going at the moment. The horses are forward enough as the weather hasn’t been too bad but we’ll see when we get there whether we make any money or not.

“You never know going into a sale. It’s the same at every sale now – everyone wants the top 25% to 30% but after that you go into freefall a little bit.”

While the strength of last season’s yearling and foal sales could imply a potential bonanza for this year’s two-year-old sales, it must be remembered that the inflated yearling prices means a greater risk for the breeze-up consignors who invested last autumn. The market can still be fickle and patchy.

“You need a bit of everything really,” he continues. “Sire power opens doors and makes people come to look at them, but they still have to perform up to a certain level. It’s not always the fastest horses that are the best, but they have to perform. Obviously people like horses by fashionable sires – they’re fashionable for a reason: because they’ve been doing well.”

Over the years, Bastard has seen plenty of changes to the breeze-up scene, most significantly perhaps the emphasis on timing, which he believes is not necessarily a positive development. 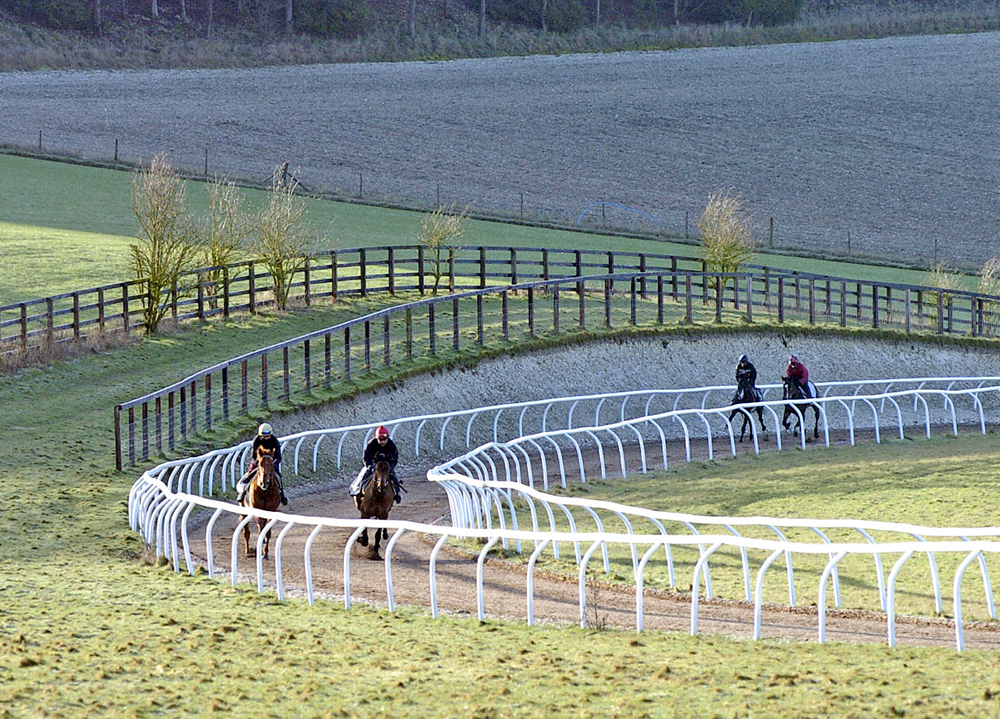 “It’s much more competitive now than when I first started as there are so many more people doing it,” he says. “There are a lot of good customers for a certain number of the horses but it’s difficult to get them all sold.

“I’m dead against the idea of bringing in formal timing. It’s been mooted but it’s not the be-all and end-all for horses to do an outstanding time. People do like it but you’ve got to have the horse in one piece at the end of it to pass the vet. You certainly want to be doing a pretty tidy time, there’s no question about that, and if you’re lucky enough to do a very fast time and be in one piece then you’ll do even better, but in my opinion it would be a bad thing to bring in timing like in America. I think it could lead to a fair bit of wastage.”

He adds: “When we first started you could have your horses going up in a pair, nice and neatly with a good action, sensibly on the bridle, and you’d get them sold but that’s a very rare thing to see a pair now.”

His opinion that timing isn’t everything is borne out by one of his 2012 Craven Sale graduates, the subsequent Dante Stakes winner and Derby runner-up Libertarian, who changed hands for 40,000gns.

Bastard recalls: “I think Libertarian did a time of about 30 seconds, which is seriously slow when the quick ones that year were doing about 22.5 seconds. But he was a big, backward, weak horse and the way he runs his races is steady early on and picking up at the end.”

Libertarian is one of two Classic-placed Baydon Hill Grange graduates in the last four years as Native Khan, “a proper horse who went from day one at home”, was transformed from a €70,000 yearling into a 180,000gns breezer before going on to finish third to Frankel in the 2,000 Guineas, as well as winning the Solario and Craven Stakes.

Putting the finishing touches to this year’s breeze-up team is peppered with a couple of whistle-stop visits to Hong Kong, where six European-bought horses he has prepared for the Hong Kong Jockey Club (HKJC) have recently touched down, with another larger batch to follow. His renewed connection with the HKJC comes about through another old weighing-room friend, Mark Richards, now the principal buyer for the organisation.

With plenty on his plate at this time of the year, Bastard could be forgiven if nerves start to fray as the clock ticks ever closer to sales time but on this sunny morning he certainly exudes the impression of a man with very few worries.

“Go and ask them in the yard and see what they say,” he grins. “I can be pretty feisty at times – I like things done the way I like them. Yes, there are worries coming up to sales time and you have to be realistic about whether a horse will make it ot not, but I have a few shares with other lads [consignors] and they have a few shares with me. We try to mix it up a little bit so we’re not too exposed.

“We get a little bit quieter here through July, August and September but I love being busy. I love being out on the gallops every morning. What else would I be doing?”

Formerly a farm which had fallen into disuse, Baydon Hill Grange was built ten years ago from scratch to house the burgeoning breeze-up and pre-training operation, and the hilltop setting is now home for Malcolm Bastard, Fiona Plummer and their two children, Ted and Millie. Just to keep things simple, the family’s dog and cat are also named Ted and Millie, but there’s another ‘child’ currently vying for favouritism and that’s 14-month old Border Collie Bob, who plays a major part in his master’s ‘getting away from it all’ strategy. 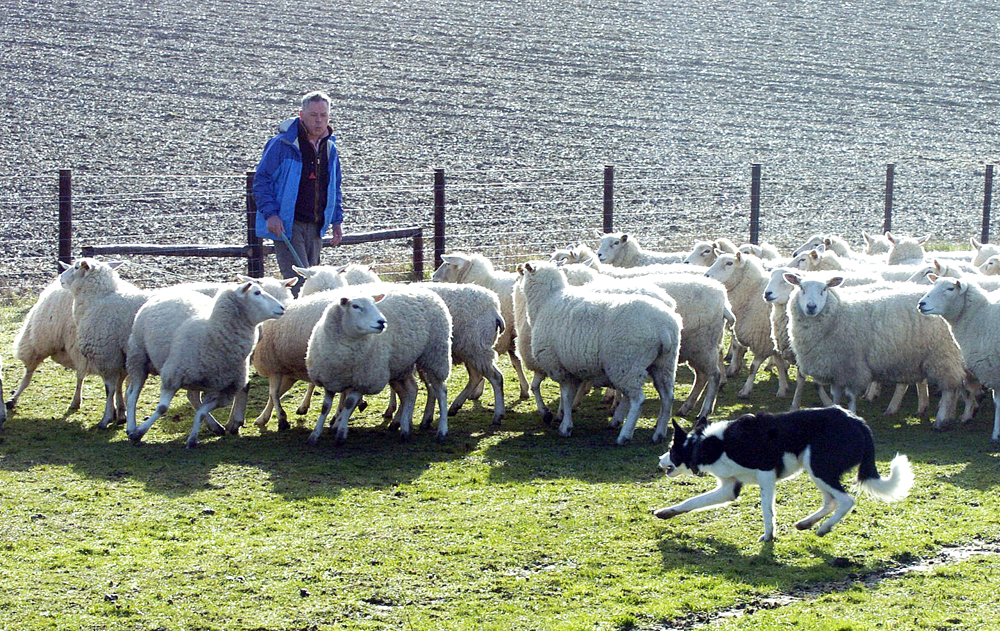 He says: “I’m mad on salmon fishing. I go to Norway every year and I have a rod on the Wye every other Friday through the season, but I also have 120 ewes which make money and I like my sheepdogs. I have a couple of dogs but I’m not very good with them.

“Bob’s only young and he’s going quite well. I think I’m doing okay until I go for a few lessons with a pal, Dick Roper, and I come home with my tail between my legs. The dog’s alright, it’s just me!”

With no real persuasion needed, the would-be shepherd and his dog hop aboard the quad bike and speed to the bottom of the gallop, where the enclosed sheep provide an interesting sideshow for the horses, and set to work. Bob is nothing if not keen and yields to the commands of his master. Eventually.

“I’m not firm enough with him,” says Bastard, who admits to spending two evenings a week watching the Gaelic version of One Man And His Dog on Sky. “It’s my hobby and I probably let him mess around too much. I never let the horses mess around but I know what I’m doing with them. With the dogs I get into a situation and I don’t quite know how to stop them doing it wrong.”

And just in case he hasn’t got enough on his plate, he adds: “I’m hoping to go to the nursery trials with Bob next winter if I can get him up to that standard.” 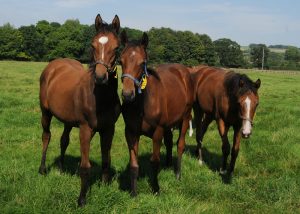