Owner/breeder Reg Bond must be delighted with the recent run of success for his former colour-bearer Monsieur Bond, who now stands at Norton Grove Stud in Malton, though he may have just a twinge of regret at selling his son Hoof It as a foal for 6,000gns in 2007.

Out of the Danetime mare Forever Bond, Stewards Cup winner Hoof It can rightly be considered as one of the most exciting sprint prospects in Britain and may head next to the Nunthorpe Stakes at York’s Ebor meeting.

All is not lost, however, as Bond has tasted success this season with Hoof It’s full-sisters Ladies Are Forever, a Listed winner at two and victrix in July of the Group 3 Summer Stakes, and Forever’s Girl, now a seven-time winner. Furthermore, the two-year-old three-parts brother Bop It, by Misu Bond, won his second race at Hamilton the same day Hoof It lifted the Stewards’ Cup for Lee Westwood and Chubby Chandler.

The mare’s other runner, Chosen Forever, is also a multiple winner, and she has a yearling full-sister to Hoof It entered for Doncaster’s Premier Yearling Sale on August 31 (lot 165).

Though the siblings have been campaigned from northern stables, their bloodlines are etched in the former Newmarket yard of Neville Callaghan, who trained both their grandsires, the paternal half-brothers Danehill Dancer and Danetime. 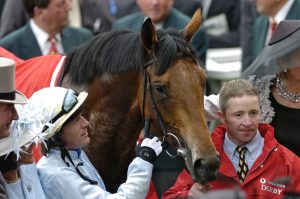