A new monthly awards series sponsored by sports betting community OLBG and aimed at increasing the number of National Hunt fillies and mares in training was launched at Cheltenham Racecourse on October 20.

The OLBG Mare of the Month Award, which will be run in association with the TBA throughout the 2012/13 National Hunt season, will reward the trainer of the mare deemed to have delivered the most outstanding performance of the month, with a prize of £1,000 being given to the staff in the winning stable along with a memento for the trainer. At the end of the season the trainer who has won the highest number of individual races with mares will be given a 12-month free lease on a two-berth Equi-Trek horsebox.

OLBG sponsored the Grade 2 David Nicholson Mares’ Hurdle at last season’s Cheltenham Festival and has increased its commitment to the mares’ jumping programme with sponsorship of three Grade 2 and four Listed hurdles for the forthcoming season, starting at Wetherby with the OLBG.com Listed Mares’ Hurdle on Saturday, November 3.

“We’re delighted to be sponsoring the Mare of the Month Awards and increasing our commitment to mares’ races,” said OLBG spokeswoman Stefanie Reeve. “We hope that this support of National Hunt racing at grass-roots level can help to change the perspective of owners and trainers to putting mares into training and, in turn, help to boost the value of National Hunt fillies at the sales.”

In September, the BHA announced an increase to the number of races devoted solely to fillies and mares. From October to December, there will be 84 mares’ races, compared to 67 for the corresponding period in 2011, plus an additional seven Listed class opportunities for mares – all novice hurdles – will be run throughout the season, taking the total of mares’ black-type races to 22.

TBA Chief Executive Louise Kemble said: “The TBA National Hunt Committee has been focusing on stimulating both the market and creating increased opportunities for jump mares. Thanks to support from the BHA and OLBG we have been able to increase the number of mares-only races and importantly boost black-type opportunities. The new OLBG Monthly Mares Award presents a valuable opportunity to recognise those trainers who do so well with mares, and make a meaningful reward to their staff.” 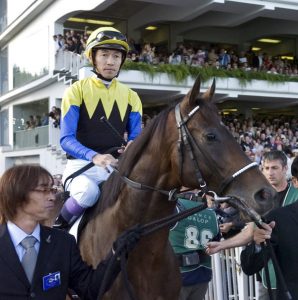 Up Next
Triple Crown winner for Japan