Oh what a Night

Kieren Fallon was back in the spotlight on Saturday when landing his fifth victory in the 2000 Guineas aboard 40/1 shot Night Of Thunder, giving trainer Richard Hannon his first Guineas success with his first runner in a Classic.

Reversing the form of the Greenham Stakes in dramatic fashion, the son of Dubawi, who is owned by Saeed Manana, reeled in leader and hot favourite Kingman to strike by half a length despite drifting left across the course to the stands’ rail. Aidan O’Brien’s big hope Australia finished another head behind Kingman to take third.

Richard Hannon, who also saddled fourth-placed Shifting Power and Toormore in the race, said: “It’s the stuff of dreams. As a schoolboy you read the Racing Post and watch Channel 4 and you dream of days like this – you think you might get there one day, and you might not. But we’ve done it.

“I’m delighted. I thought he’d run very well and we were a bit disappointed after Newbury, but it’s a tribute to him that he has come back and turned the form around with Kingman.”

The most successful jockey in the first Classic of the British season Fallon last won the Guineas in 2006 when he partnered George Washington for the Ballydoyle team.

He said: “This is a great way to start the season, it’s a real boost. I’m on a real high right now and that means everything in this game. This was a really good field for this race and I thought there were five or six horses with very little between them, so to win the way he has just shows what a good horse he is.

“It wasn’t a plan to go on the nearside rail. I wanted to go wherever the speed was because I wanted to switch him off, because he was a bit gassy at Newbury, which was his first run of the season and he needed that to get it out of his system. He switched off completely with me today and was able to use his turn of foot.”

In an exclusive interview in this month’s Thoroughbred Owner & Breeder, 49-year-old Fallon discusses how he came close to rescinding his jockey’s licence last season. Click here to read the full story. 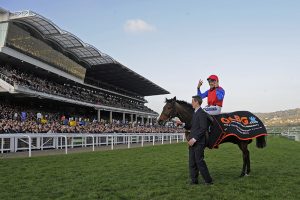 Up Next
Quevega retired as winning streak ends