Of course she can

While it may be more pronounced in National Hunt breeding than on the Flat, there’s no doubt that a great proportion of breeders greet the arrival of a filly foal with less glee than that of a colt. For commercial breeders, it comes down to a matter of simple mathematics: colts are worth more than fillies at the sales.

The balance of the sexes in training stands at around 60% colts to 40% fillies. Admittedly, some fillies from the very best families may not ever be put into training, but this practice is rare. More frequently, breeders either opt not to send ‘lesser’ fillies to the sales, knowing that the cost of preparing and consigning them can sometimes be greater than the price they fetch in the ring, or they struggle to find a place for them at sales as demand for places has risen in line with the growing foal crops.

Encouragingly, however, the results of a recent review by the BHA, prompted by the TBA’s identification of a number of initiatives to potentially benefit the industry, show how short-sighted it is for buyers to overlook fillies when shopping for yearlings. The challenge now for both organisations is to change the perception of buyers.

Jet Setting has been the poster girl for inexpensive fillies this year – inexpensive, that is, until she sold for £1.3 million at last month’s Goffs London Sale. That, however, was after she had previously fetched €7,000 as a foal and 12,000gns at last year’s Tattersalls Horses-in-Training Sale after several placed efforts as a two-year-old.

Not even a crystal ball could have predicted the level of improvement shown by the mud-loving daughter of Fast Company, whose subsequent fairytale victory in the Irish 1,000 Guineas for trainer Adrian Keatley and Equinegrowthpartners Syndicate has been one of the feelgood stories of the racing season. But Jet Setting is far from the only filly to have transformed from a relatively bargain-price youngster to a highly desirable commodity.

At this year’s Royal meeting, Showcasing’s daughter Quiet Reflection, trained by Karl Burke and partnered by Dougie Costello, gave the boys a beating in the Group 1 Commonwealth Cup. Quiet Reflection’s two appearances at Goffs (Doncaster) saw her sell for £32,000 (yearling) and £44,000 (two-year-old).

At 16,000gns, Mecca’s Angel was the cheapest representative of the six offspring by her sire Dark Angel sold at Tattersalls October Book 2 back in 2012, when bought by her trainer, Michael Dods. A Listed and Group 3 victory at three, followed by her triumph in the Group 1 Nunthorpe Stakes last year, mean she is now a valuable broodmare prospect, and indeed some reflected glory has already been felt when her breeder, Yeomanstown Stud, sold her yearling sister last year for 825,000gns in October Book 1.

Success tends to beget success, and fillies closely related to these Group 1 winners will need no advertisements should they themselves come up for sale. For many other less well connected females who also deserve a chance to improve their own pages on the track, it’s not always easy for their breeders to convince potential buyers to take that chance. This is why the BHA’s Director of International Racing and Racing Development, Ruth Quinn, is keen to improve market perception in this regard.

“Further, we have 1,296 more colts in training today than ten years ago, but only 227 more fillies, albeit we are seeing a significant uplift in the quality of fillies, particularly those rated 85 and above.

By highlighting the opportunities for fillies, and their earning potential, we hope to close the gap

“By highlighting the significant opportunities available to fillies, and their overall earning potential, we hope to close the gap by positively changing the perceptions of breeders, owners and trainers to realise that fillies can be an excellent prospect on the racetrack, which can only benefit all corners of the industry.”

These are not empty words. Over the last ten years there has been a 40% increase in the number of races programmed on the Flat exclusively for fillies and mares (and similar promotion has taken place in the National Hunt sphere), with a total of 694 being staged in 2015. As Quinn indicates, during that time the number of fillies rated 85 or above has increased by 58%, though the number of fillies in training has not increased anywhere near as much as the colts.

One reason for this may be the increasing desire – often through necessity – of some owners and trainers to win early with a horse in the hope of selling on to markets such as Hong Kong, where a €12,000 yearling who wins at Royal Ascot can become a six-figure prospect overnight, as was the case with last year’s Chesham Stakes winner Suits You. A small proportion of these colts may become stallions but, broadly speaking, fillies offer far better residual value than colts and, as the BHA’s study shows, once they get to a rating of 75 or beyond also have better earning potential on the track.

In addition to the recent launch of the marketing campaign under the tagline #thisfillycan, the BHA, in partnership with the TBA, has also introduced a number of other recent initiatives to help to improve the interest in fillies at the sales.

These include the European Breeders’ Fund Fillies’ Series, with generous backing from the EBF and a finals’ day at Newmarket in the autumn, as well as the introduction of two new fillies’ Listed races at Ayr and Bath, and the inclusion of 230 races for two- and three-year-old fillies under the Plus 10 bonus scheme.

“The TBA is delighted the BHA undertook a thorough situation analysis of the landscape for fillies and mares, which is so important to us breeders. Some of the findings are fascinating and in some cases surprising,” says TBA Chairman Julian Richmond-Watson, who oversees the Plus 10 scheme. 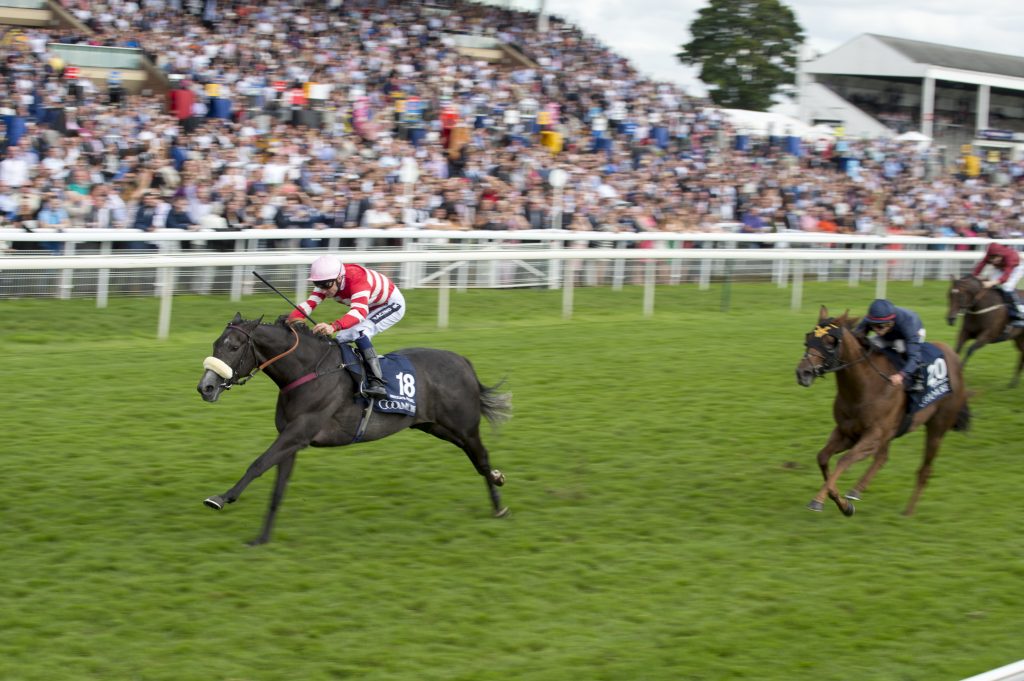 “As custodian of the thoroughbred, the TBA has a duty to ensure that the fillies’ and mares’ programme is as robust and testing as possible, while ensuring that as many as possible of the better quality females have opportunities to race and compete in this country where hopefully, when they retire, they will reside at stud.

“The review proves the opportunities are there and that the quality of fillies is improving, so it is now up to us to change perceptions about fillies and mares; their racing suitability, their residual value and the opportunities that exist for them.”

Trainers have been quick to digest and welcome the report and the hope now is that they can begin to convince owners to buy fillies at least in equal numbers to colts.

Dual Oaks-winning trainer Ralph Beckett says: “The review revealed several surprising findings. Firstly, that once rated 75 and above fillies earn more prize-money on average each season than colts; and secondly, that the programme did not need a wholesale rebalance to even out opportunities for fillies and mares, more that it needed adjusting here and there. I think that the review has achieved its aim, and we can look forward to the result of its recommendations.”

Ed Dunlop has also handled the careers of two Oaks winners, but is aware that not all fillies can reach those dizzy heights. He adds: “I believe there are now more opportunities for fillies and mares, and especially so for the fillies working their way towards Listed class. We won one of the new EBF fillies’ handicaps with Sagaciously recently, who is a four-year-old filly rated 90 and she picked up just short of £13,000.”

His Newmarket colleague William Haggas hopes that the report’s findings may encourage more breeders to retain fillies, but from the commercial aspect says:

“It should also enhance the sales of fillies at all levels. The opportunities which will be available should be a boost for owners, breeders and trainers alike and I am, and will be, fully supportive of this welcome initiative.”

The BHA report indicates the median price for fillies at last year’s sales was £11,800. A mere snapshot of the yearling sales, focusing on the three main books of the 2015 Tattersalls October Sale, gives an interesting overview of different levels of the market.

At the top end – Book 1 – fillies with the stellar pedigrees bought as long-term prospects by wealthy owner-breeders outsell the colts. In Book 2, there was more than double the number of colts sold than fillies for an average of 64,151gns, compared to 57,380gns. In the tougher market of Book 3, where many smaller breeders find their stock, there was an even split between the sexes on numbers catalogued, with the colts’ average standing at 14,772gns and the fillies’ at 11,443gns.

Louise Parry, who bred Irish 1,000 Guineas winner Saoire at her Pembrokeshire-based Pantycoed Stud and sold her as a foal for just 4,000gns, is another to welcome the drive behind fillies at the sales.

She says: “It sounds like a really good initiative and I’m delighted to hear that the BHA and TBA are being pro-active. Fillies are fantastic value for a smaller trainer – not just in their earning potential but the residual value as a broodmare if they show ability.

“My one concern as a small breeder is that it is becoming harder even to get a filly into sales. I don’t blame the sales companies – they are running a business and they realise that there is more interest in the colts – but it is becoming more of a worry as the foal crops are getting bigger again.”

TBA Board member and owner-breeder Philip Newton has worked closely with the BHA on the fillies’ report and in devising the marketing strategy which will be rolled out as the autumn yearling sales approach. He agrees with Parry about the need to promote the positives of buying a filly.

“If we can change the perception of fillies as a racing product and modestly improve their value, this can and will have a positive effect upon the breeding industry and the supply line to the racetrack,” says Newton.

“We are not saying ‘breed more horses’ but we are looking to make the most of the population we have, and changing the perception of fillies at the sales and as a racing entity is the best start. A third of the racing product – 1,500 foals annually – are produced by small breeders, many of whom lose money. They are vital to our racing programme and, while subsidies are not the way forward, we need to ensure a sensible price for the product and that alone will make our industry more sustainable.”

He continues: “This study has demonstrated the opportunity for fillies and mares. Not only is it a statement of a commitment to continuing to develop the quality, but also an opportunity to change perceptions at trainer, owner and breeder level. If we can achieve this it’s a win-win.

“The TBA and the BHA have already committed to this programme, which has been a joint initiative and shows what we can do when we work together.” 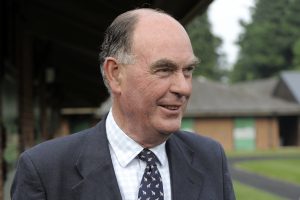 Up Next
Candid Candy still ambitious