The 2012 International Breeders’ Meeting, hosted by the TBA in late July, was widely acclaimed as one of the most successful in recent years. Having agreed to rebrand itself as the International Thoroughbred Breeders’ Federation, the ITBF also produced a new mission statement, which includes the line: “To act as a liaison body with racing and allied institutions and authorities, so that the international thoroughbred breeding industry is represented and given space on worldwide forums.”

Great aspiration I hear you say, but already the ITBF is faced with some tough challenges which to be truly effective need international consensus. It is certainly no coincidence that the executive of the International Federation of Horseracing Authorities has also recognised the need to build on its external relationships and communications in particular with the International Stud Book Committee. In addition, both the IFHA and ITBF are also looking to forge closer contact with the World Organisation for Animal Health, which is so influential in the way our global sport is governed from the point of view of animal movement and disease threats.

The ITBF received a presentation on the American racing and breeding industry’s race-day medication issue, which has seen a growing number of people involved in American horseracing voicing their opposition to the use of performance-enhancing drugs in racing.
On a wider front, the challenge of identifying and imposing a system to manage the increase of DNA performance-profiling will ultimately impact on all breeders, vendors, purchasers and owners. In fact, every industry participant, including the betting public, will need to consider how to deal with this new and potentially vital information. As owners of the genetic material, breeders must take a lead in this debate and protect their position.

It’s somewhat ironic, therefore, that whilst the range of data we will soon be able to accumulate on our bloodstock will influence the way we conduct our business in years to come, the number of foals registered in Great Britain continued its downward trend in 2012. Recent figures published by Weatherbys indicate that the number of British-bred foals registered up to July 31, 2012 totalled 3,896. This is 106 less than registered at the same period in 2011 and represents a significant reduction against the highest recent figure of 5,920 as at December 31, 2008.

The only positive indicator from recent statistics was an increase in new broodmare registrations, albeit by only 24 mares compared with 2011 figures. This remains a long way off the 1,432 newly recorded broodmares in 2009, and may be a result of one or two breeders’ actions, rather than a true signal that optimism has returned to the breeding industry.

Compare this with the recent announcement of an increase in yearling numbers catalogued for sale by British sales companies. Time will tell whether this is an indicator of a view that the market will be stronger in Great Britain than the rest of Europe. However, our immediate concern is that this may negatively impact on British breeders. While I accept that the sales houses shouldn’t be castigated for offering premium spaces to horses that they believe first and foremost will attract the greatest return, I believe that British breeders have a right to expect to be able to sell their commercial yearlings in a domestic marketplace.

If these issues aren’t enough to keep your new Chairman awake at night, following the Levy Board’s decision not to support British Bloodstock Marketing, the future of collective support for bloodstock marketing requires attention, whilst a similar concept of collective financial support to retain the Horsemen’s Group is also very likely to find its way onto the TBA Board agenda.
Closer to home I take great encouragement that my first Chairman’s column attracted quite a bit of interest, with a fantastic response to the membership questionnaire, which has provided invaluable information on the size and shape of the British breeding industry and feedback on what you, our members, want from the association. 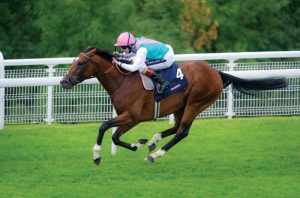 Up Next
Galileo underlines his supremacy