Novellist remained unbeaten for the season with a dominating display in the King George VI and Queen Elizabeth Stakes, leaving Irish Derby winner Trading Leather trailing in his wake by five lengths and setting a blistering new course record in the process.

Though the race was weakened by the absence, through serious illness, of St Nicholas Abbey, it is hard to imagine any of the elite middle-distance brigade being able to better Novellist’s outstanding performance.

Having run the mile and a half of Ascot’s reconfigured track faster than any other horse previously in a time of 2m 24.60s, it was a good distance beyond the post before jockey Johnny Murtagh was able to pull up the four-year-old colt, who seemed insistent on taking a well-deserved lap of honour.

Coming in for the ride after William Buick and Ryan Moore were engaged by others, Murtagh, who now combines race-riding with training, continued his terrific run of form, which saw him win last weekend’s Irish Oaks on another overseas raider, the French-trained Chicquita, and record four victories at Royal Ascot.

It was the first time the 42-year-old had partnered Novellist, who, under the guidance of trainer Andreas Wohler, has recorded four consecutive victories at Group level, including the Grand Prix de Saint-Cloud in June and last year’s Gran Premio del Jockey Cub Italiano at San Siro in Milan.

He kicked off this season with victory on home turf in the Group 2 Grosser Preis der Badischen Unterehmer at Baden-Baden. In total, he has won eight of his ten career starts and was runner-up to Pastorius in the Deutsches Derby.

The only time he has finished out of the first two was when he was fourth behind Danedream – the 2012 winner of the King George – in last September’s Grosser Preis Von Baden.

“I was worried about how confident Johnny was before the race because I thought he shouldn’t be thinking it was too easy but he rode the horse as if he’d ridden him 20 times before,” admitted Wohler. “We were going to use Ryan Moore before Hillstar was supplemented and then looked at William Buick, because he rode the horse last year. But he couldn’t commit because he didn’t know if he would have to go to York so I rang Johnny, who has ridden for me a long time ago.

“At first they didn’t go too fast today and then the pace quickened and quickened but my horse still cruised. I started walking down the steps a furlong before the winning post.

“His main target now is the Arc and he will have one race beforehand. The two options are the Prix Foy and Grosser Preis von Baden and it’s more likely we’d go for the Grosser Preis. He’s won a Group race in Germany and a Group 1 in Italy last year but to make a stallion he needs more international form so we went to Saint-Cloud and then on to here.”

Despite bearing an Irish suffix, Novellist is very much a product of the German racing and breeding industry. A son of that country’s late, great flagbearer Monsun out of the Group 3 Preis der Winterkonigin winner Night Lagoon, Novellist was bred by his owner Dr Christoph Berglar, as was his dam and grand-dam, Nenuphar, who was sold for €230,000 at Goffs in 2007 and now resides in the broodmare band at Tinnakill House Stud in Ireland.

“It’s the strength of our German horses that they mature late and when stepped up in distance,” said Wohler.

Novellist’s Irish connection comes about through his dam being covered by Dalakhani in the year of his birth. His year-younger brother Nuntius is also in training with Wohler and Night Lagoon has a two-year-old filly from the penultimate crop of Selkirk to follow. 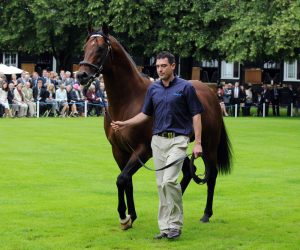 Up Next
Black Caviar booked to Exceed And Excel