By The Owner Breeder staff 02 September 2020

Non-standard race times will be introduced permanently from October, the British Horseracing Authority and Horse Racing Ireland confirmed on Wednesday.

The decision comes after a successful trial in February and aims to provide more flexibility through periods of congestion to avoid clashes and delayed races. Non-standard race times also minimise the need for on-the-day changes, giving more clarity to broadcasters and racing’s customers.

Non-standard race times are to be used when there are four or more fixtures across Britain and Ireland in one session, or in the period of racing between afternoon and evening racing.

Richard Wayman, Chief Operating Officer of the BHA, said: “The trial of non-standard times in February resulted in a reduced number of race clashes and delays on busy afternoons, which was well received by those watching, broadcasting and betting on the sport.

“This also had a positive impact on racing’s finances and following further collaboration with our colleagues in Ireland and discussions with the betting industry, we believe bringing in non-standard times on a permanent basis would continue to deliver considerable benefits to our customers.

“We appreciate the efforts of all those involved in attempting to ensure that races go off on time and there will, of course, still be occasions when unavoidable clashes and delays occur.

“However, this decision will help to minimise the frequency of such occurrences and ultimately allow us to schedule races in the best possible way for followers of the sport.”

Jason Morris, Director of Racing at HRI, added: “HRI works closely, through SIS, with the BHA and Racing TV to optimise race times between the two countries. The use of non-standard race times, when trialled earlier in the year, proved effective in terms of reducing race clashes and enhancing broadcast coverage, improving the viewing experience for our customers.

“We have therefore agreed to their continuing utilisation from the start of October. As with the trial period, at the request of Irish racecourses, the first race in Ireland will retain a standard time to aid their promotional efforts.” 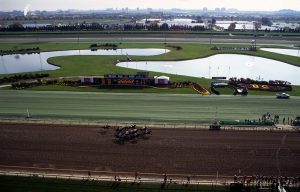 Up Next
Rise in median highlights solid Canadian Yearling Sale