The winning breeder and owner of the horse that wins The Planteur at Chapel Stud Henry VIII Novices’ Chase at Sandown Park on Saturday will both receive a free nomination to Planteur as part of their prize.

Previously standing in France, Planteur recently relocated to stand at Chapel Stud in Worcestershire and will command a fee of £3,000 for the 2021 breeding season. The son of Danehill Dancer won the 2011 Prix Ganay and is the sire of Group 2 winner Trueshan.

The same prize was presented to the owners and breeders of Ramsees De Teillee following his win in the Planteur at Chapel Stud Steeple Chase at Cheltenham last month.

Planteur’s owner and breeder, Simon Davies, said: “The aim is to get more high-quality National Hunt stallions standing in England and Planteur definitely meets that criteria, and has lot of exciting progeny coming through.

“By providing quality, hopefully it will encourage small and large breeders to utilise GB suffixed stallions and take advantage of the enhanced Great British Bonus scheme.” 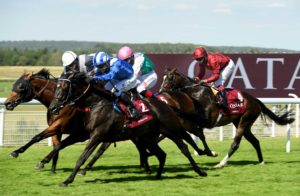 Up Next
Mohaather heads Shadwell Stud roster for 2021